Is the iron on Earth's crust a leftover of the Iron catastrophe, or it was brought back by volcanoes?

When pondering the hypothesis of the Iron catastrophe, that seem to be widely accepted nowadays. It surprises me that currently the crust still contain a significant amount of Iron (5.6% in weight).

I wonder if that much Iron is what didn't sink in the Iron catastrophe (just because the process wasn't perfect), or it can be explained by slow reloading with iron transported from the outer core and mantle to the crust trough convection and volcanic activity.

Or perhaps it cam from other sources like meteorites? 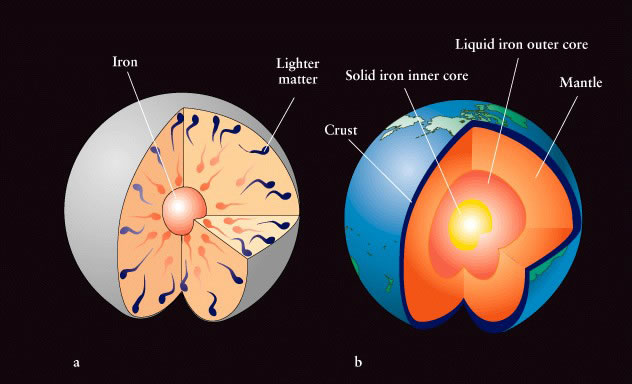 Not all the iron sank to the core. Have a look at my answer to a previous question:

Your question is similar, but coming the other way. You're asking - why is there iron in the mantle/crust?

The answer is that there was enough oxygen left in the Earth after oxidising the other lithophile elements (Si, Mg, Al, Ca, etc) to oxidise some of the iron. And when iron is oxidised - it is not a metal anymore, but instead incorporated into rock forming minerals like olivine and pyroxenes.

Not the answer you're looking for? Browse other questions tagged geophysics geochemistry volcanology core iron or ask your own question.

27
Why is Earth's inner core made of an iron-nickel alloy?
16
Why is there Uranium in Earth's Crust?
11
Which theory is stronger, that iron came from outside or was formed within earth?
6
What was the likely composition of Earth's early crust (how did crustal composition evolve)?
12
Why is Earth's Core Iron?
4
Does iron in core have chance to come out to crust?
6
Why doesn't the Earth's outer core dissolve into the mantle?
0
How was the Earth's core made?