Coriolis effect discrepancy. How to deduce the direction of the effect?

From what I understand (please correct me if I'm wrong), the Earth rotates counterclockwise as viewed from the north pole. That means from the perspective of the equator to the north pole, it is rotating clockwise. Hence, if I shoot a projectile towards the north pole from the equator, it should move leftwards likewise if I throw a ball towards the person in front of me in a clockwise-rotating turntable. But, in my textbook and Wikipedia it says that it would go rightwards. Where did I get it wrong?

That means from the perspective of the equator to the north pole, it is rotating clockwise

From the Equator, the North pole is in a fix position, as well as the celestial north pole, that is fix to the Equatorial horizon due north. But the starts and the Sun moves around it from East to West, which is COUNTERCLOCKWISE. That's is because the observer is moving Eastwards.

Coriolis is easier to understood if you imagine that any point on the Earth's surface (or the atmosphere) north of the Equator, have to complete a smaller circle around the Earth axis every 24 hours. Therefore, those points are moving Eastwards at a slower speed than the ones at the equator. Hence, if you shoot a projectile to the North, it will have an excess Eastwards velocity relative to the ground under it, so it will tend to go Eastwards. Which will apear like it is turning rightwards. If the projectile is flying south from the Equator, Eastwards will mean leftwards.

This schematics from Facts About All will help in an example: 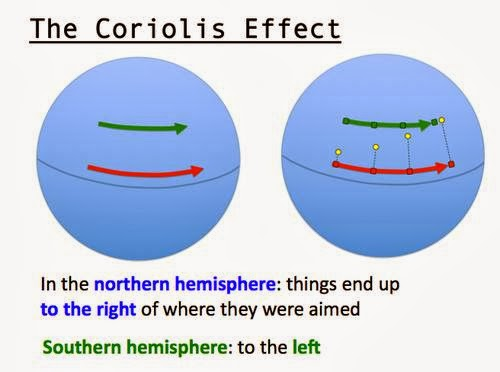 Now, in 3.96 hours, the projectile would have reached the latitude of Raleigh, but in the same amount of time the eastward component of its speed took it 6,600 km to the East. However, the eastward velocity of Raleigh is only 1356 km/h

That means that, while the projectile wast traveling, Raleigh only moved 5,369 km eastwards, 1,231 km less than the projectile, with the consequence that the projectile ended up, 1,231 km to the East of Raleigh (The right as seen from "La Mitad del Mundo"), catastrophically missing the target, and falling in the Atlantic ocean somewhere north of Bermuda.

This excess eastward velocity visualization of Coriolis, seemingly falls apart when considering a projectile shoot due East or West. But it would still be deflected to the right (in the northern hemisphere). An explanation in such case can be found in this answer, however that answer is not as clear as I would like, as it just ignores the vertical effect, also known as Eötvös effect, which is important to make sense of the deflection of a projectile traveling East/West. In short, the increased/decreased velocity of a projectile moving East/West, increase/decrease the centrifugal force, so it moves away/towards from Earth's axis of rotation. This means "moves up" at the equator, and move south/north and up (in different proportions) north of the equator. The rightwards deflection is considered part of the Coriolis effect, while the upwards deflection is the Eötvös effect.

It's been a while since I've thought about this... and every time it still does take some careful thinking through it all. But hopefully this can really help you get it put together!

First: Yes the Earth rotates counterclockwise around the Pole... 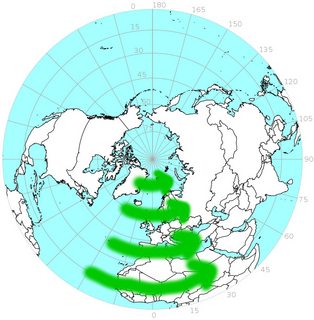 The thing is, when you shoot an object "due north" towards the North Pole... you really aren't shooting it with a due northward velocity!

The initial motion of the rocket isn't just it's fired trajectory... but also includes the motion the location it's launching from has. This is much like if you were in your car driving forward down the interstate, and chose to toss something out the window "directly sideways"... you'd find the can actually continued to move forward as it bounced along the road.

And the thing is, the further poleward a place is, the less eastward velocity those places are rotating with. Yet your projectile has brought its higher eastward velocity it started with. So it winds up ahead of where you think it should if going true north, because it rotates eastward faster than that location. [For the car-can analogy, if someone was driving slower in the lane beside you... the thrown can would actually seem to travel forward away from him, until air resistance worked enough to slow it down......]

(Likewise, hopefully you can also see that "eastward" itself is actually changing the direction it points on the overhead view [originally east of Algeria is straight to the right, but by the time it has moved to the end of the green arrow, it becomes up and right]. However the projectile keeps its exact same direction arrow. If you follow along the path of that arrow, in terms of cardinal directions... its "northward" progression slows, and it actually eventually starts moving what is then south . So the rotation of the Earth not only alters what we perceive to be east-west movement [turning it to the right in the NH], but also likewise alters the north-south movement [the same turning to the right in the NH occurs, regardless of whether]. We see the rocket as behaving oddly, but the issue isn't with the rocket, but due to the fact that we're actually continually moving AND changing direction to rotate around the Earth.) 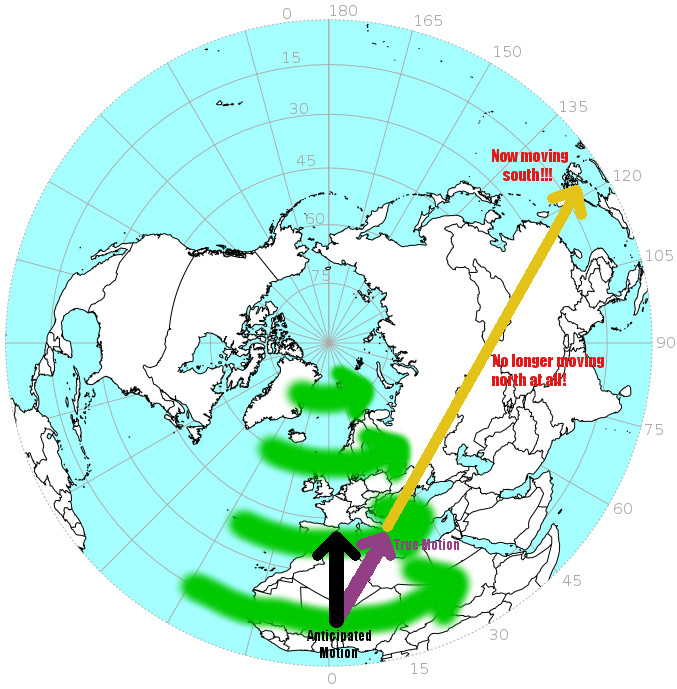 (Note the Earth rotates too of course, so Algeria will truly have moved around near the area where the yellow arrow ends by the time it gets up there.)

And it may well help a lot to note: it actually does the exact same (turn right) when operating from a counter-clockwise rotating turntable too!