Science behind the groundhog day myth

The myth goes that if a groundhog sees his shadow on Feb 2, six more weeks of winter are yet to come, but if he doesn't, spring is just around the corner.

I am wondering if there is any science behind this myth, or perhaps an origin based on observations of actual weather patterns relating to the seasons.

Never mind the groundhog, I am thinking about sky conditions and the seasons.

Specifically, where I am in southern Ontario Canada, winter is usually at its coldest around the start of February. At this time of year we are often under an arctic high pressure "dome"; skies are often clear. As the cold gives way to milder weather, we often end up under the jetstream, or at least it sweeps back and forth over us, delivering a lot of stormy, wintry weather, after which the jetstream at the boundary of the polar air mass eventually retreats north and spring arrives.

Is this an oversimplification? If not, could this sort of pattern be the origin of the myth: generally clear skies mean winter remains settled in, more unsettled weather means winter is about to give way to spring?

It is a myth. To say that it is unscientific is perhaps not the best phrasing, but Groundhog day isn't the most accurate prognostication method around. For something to be scientific, it needs to follow the scientific method. Given that Groundhog day follows the myth that:

, the implication derived from a poem being that nice weather now means bad weather later and vice-versa. Without defining 'winter' or 'spring' I question the testability of the hypothesis. In reality, astronomical spring occurs 6 weeks and 4 days after Groundhog day, making the distinction between the groundhog's "definition" of spring entirely subjective. But translating a subjective metric into an objective criteria, it is less accurate than the Farmer's Almanac of 50%.

If you want a more likely explanation on why a groundhog might behave the way it does, one need not look much farther than a picture from Punxsutawney, PA on groundhog day: 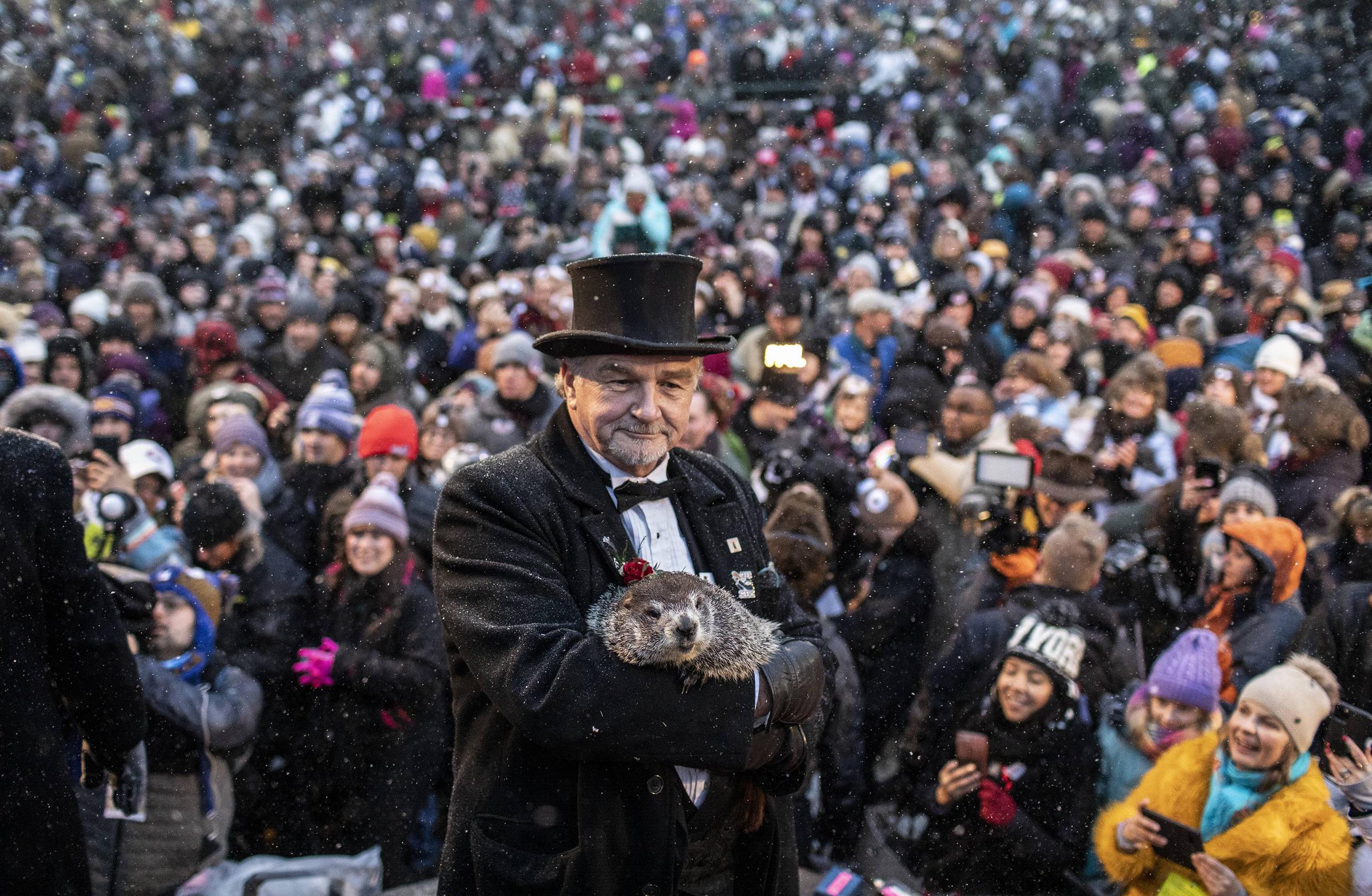 Given such a crowd, will an animal react more about the crowd or the upcoming weather? My guess is that if you saw such a crazed crowd show up to your house at 7:25 AM, you would want to crawl into a hole too. A groundhog must go into it's hole at some point, and I don't know of a part of the myth that says that the groundhog must immediately go back into its hole. Doing a groundhog day tradition with so much festivity, scientifically (not necessarily rationally though), be a contaminating factor to any sort of experiment. That is, even slight deviations in how such a thing is conducted (and given that groundhogs like Phil basically live like royalty in comparison to groundhogs in their natural state) make any rigorous evaluation of Phil's prognostication ability questionable.

Groundhog day doesn't have anything to do with science. It's based on a pagan festival called Imbolc. It's their traditional start of spring and known to Christians as Candlemas.

9
A good book or source for climate science and meteorology basics?
19
Why do more tornadoes happen late in the day?
22
How can the average coldest day of the year be before the winter solstice?
7
Dew point variation in a day
2
How do simulate a cloudy day for a science fair project?
7
What are the differences between Climatology, Meteorology and Atmospheric Science?
3
Why can't the meteorologists predict for sure if the day would be rainy even on the beginning of the day sometimes?
3
Snow on a relatively warm day