Does the snow come from local moisture or transported moisture?

Currently there is a snow storm coming from Europe over the UK. This is drastically dropping the temperature and making it snow lots.

It comes from nearby bodies of water, such as the ocean.

Precipitation of any kind (in this case snow) comes from water that is evaporated from bodies of water like lakes or oceans nearby due to heat (usually not far from where it's going to precipitate). The evaporation forms clouds, which move a certain distance (depending on the cloud, cloud type, and atmosphere temperature and/or conditions) across the globe. Eventually, the vapor in the clouds condenses into rain after cooling enough to do so; thus, creating precipitation. 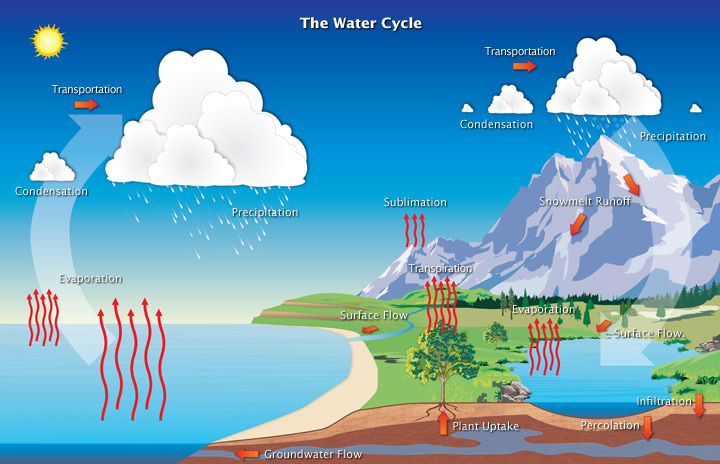 Even though only half of the water cycle is explained in my first paragraph, the other half is not needed to answer the question. If you wish to learn more about the water cycle, please visit this link.

So to answer your question, a little bit of precipitation is from the atmosphere, but most of it is from water that has been evaporated from bodies of water nearby. And in the scenario you've mentioned, the moisture most likely came from the Atlantic Ocean.

So the real answer is kinda both :/

The moisture comes from nearby water bodies, and then it's transported to where it's going to precipitate. It is local and transported moisture.

Not the answer you're looking for? Browse other questions tagged meteorology atmosphere precipitation snow or ask your own question.

10
Snow from Fire: Could graupel, or even snow, fall from pyrocumulus clouds?
5
'River-effect' snow
4
Is there any new water formed on, or brought to, Earth?
5
Can I use radar data to estimate snowfall, or is there a better way?
7
Where did all the CO₂ come from that was deposited as coal during the Carboniferous?
1
Why does Japan get so much snow?
3
Snow on a relatively warm day
6
Does global warming inhibit transport of moisture?