What are the sunniest places on Earth? (including oceans)

This question did arise when thinking on offshore solar power plants, what's their potential, and how efficient would they be compared with land based counterparts.

Recently, it is becoming more common to hear about offshore floating power plants, like this one, this one or this one.

But when it comes to big projects, usually solar power plants are planned in very sunny places, like the Arizona desert to maximize output the power.

And when looking for the sunniest places on Earth, all the lists and ranks I've found only include land areas. All the above had motivated the following related questions:

It is an interesting question, and despite that latitude is the main control of the amount of solar radiation that reaches the top of the atmosphere at a given location, the answer will be determined by how exactly weather patterns distribute across the different latitudes. Therefore, a solid answer will require to be supported in data.

A good dataset for this propose is the one at the Surface meteorology and Solar Energy. I recently used it to answer a somewhat similar question. In this case I'll use the Insolation Incident On A Horizontal Surface dataset, that provides a 22-year average (July 1983 - June 2005) of solar insolation in kWh/m^2/day (kWh per square meter per day) derived from satellite measurements, allowing worldwide coverage at 1° resolution (~110 km).

Where the numbers in the color scale on the left have to be interpreted as average kWh/m^2/day. We can see a clear latitudinal gradient were the equatorial latitudes receive much more energy than polar ones, however there are significant longitudinal variations due to the different climates that can be found at the same latitude.

In a first look, land areas doesn't seem to receive more energy. Land over the equator seem receive relatively less energy (due to cloud cover), and the deserts "hot spots" like Atacama and Sahara are quite far from the equator (~2000 km). In the other hand, there seem to be extensive equatorial waters that receive a lot of energy.

The figure shows the maximum of the data set (6.98 kWh/m^2/day), giving to the Atacama desert in Chile the title of the area that receive more solar insolation on Earth. However, it is a fairly small area.

The following picture show the same dataset overlaid on top of a world map to make land areas highlight a bit more, and contours on the areas receiving more than 6 kWh/m^2/day

It is clear here that despite that the Sahara and Atacama deserts are within the areas with more insolation, the vast majority of such areas lay over the oceans.

So, in regard to your first question, I would say that despite the first place of the highest solar irradiation contest go to the Atacama desert, the rest of the podium belongs to the oceans. In fact if we look at the "pixels" of the dataset with values above 6.9 kWh/m^2/day, there is two in the Atacama desert and 16 in the Pacific ocean. So in general I would say that it is false to say that no place in the surface of oceans gets as much solar energy as a sunny place on land.

To answer the second question we can have a look at the dataset of the Monthly Averaged Clear Sky Days (i.e. cloud cover less than 10% over the same 22-year period), and it looks like this:

This time the color bar numbers have to be interpreted as average clear sky days per month. Here we can see that the high insolation in the Atacama desert is explained by a very large amount of clear sky days (17 per month) while in that sunny Pacific ocean spot there is at most 10 clear sky days in average. But wen it comes to the record of the most clear skies days, the winner is Antarctica, with large expanses with 20-22 clear sky days ion average. However, if there is several month without sunshine I don't know if it could be translated as the "sunniest" place.

So, in regard to your seconds questions, I would say YES, oceans have in average a much more persistent cloud cover than land. In fact, pretty much all the areas with more than 10 clear sky days per month in average are on land, and the vast majority in Antarctica.

Now, to answer your third question we have to separate the data of the first dataset (first figure) into land and sea. To do that, I've used the ETOPO1 Global Relief Model, saying that any place at an elevation of 0 meters or more would be land, and anything below zero is ocean. I've also transformed the data to an equal-area projection, to make the calculation easier, as in the original data a "pixel" near the poles was much smaller than one at the equator. The land area insolation looks like this: 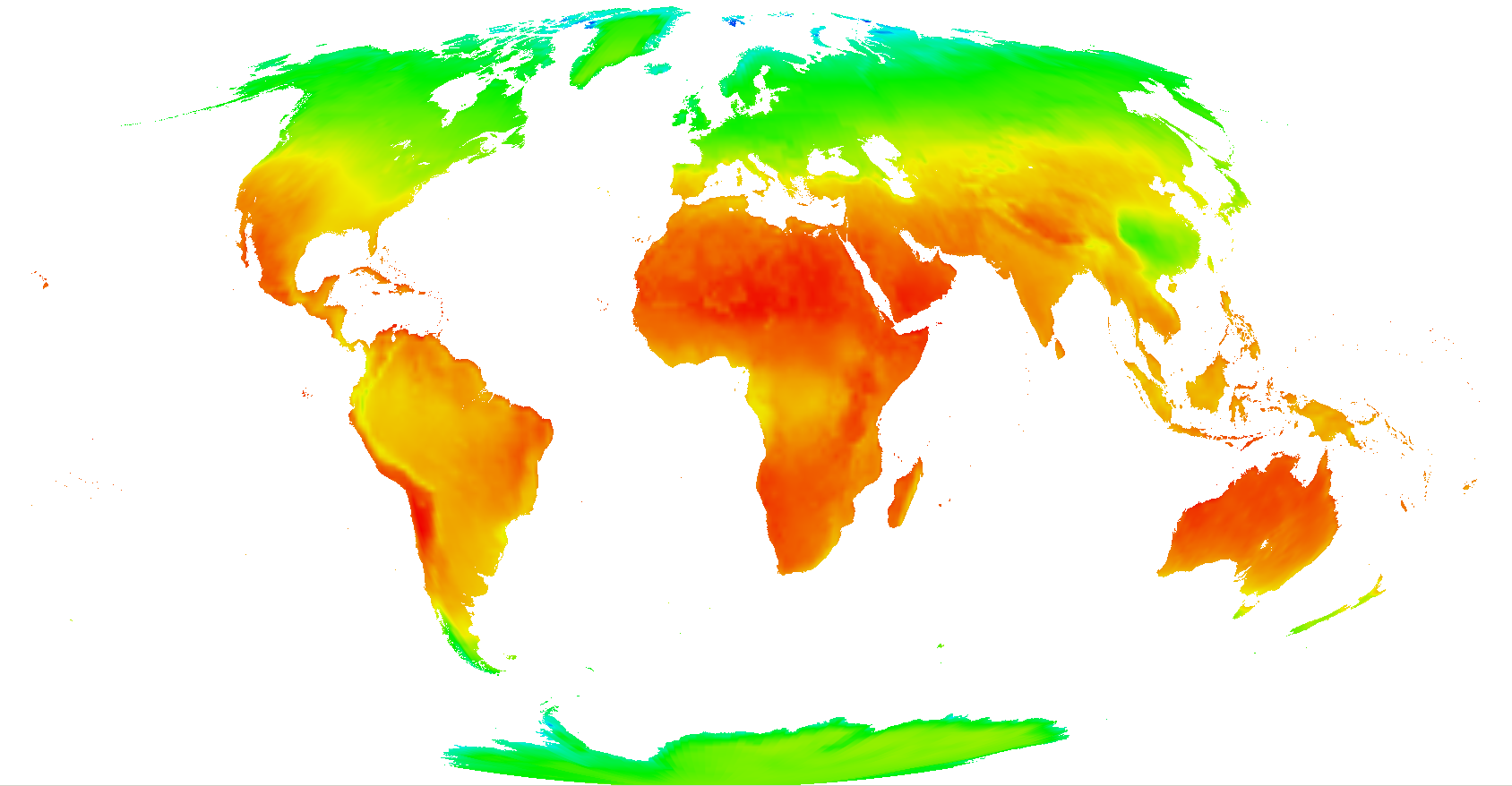 And the mean total insolation received by land is 6.45e14 kWh/day or 645 PWh/day (peta watts per day), in contrast with 1,656 PWh/day by oceans. Therefore 72% of the energy end up in the oceans. The total is 2,301 PWh/day, which as a sanity check, we can see that it have the same order of magnitude than the total amount of energy hitting the top of the atmosphere, a value that we can easily calculate using the solar constant and Earth's radius (24*1.362*pi*6378100^2 = 4.177e15 Wh/day= 4,177 PWh/day). These two totals don't match as expected because a significant fraction of the energy gets reflected (Earth's albedo is 0.3) or absorbed by the atmosphere.

To wrap up all this information in the context of your question. There is indeed a great potential for offshore solar power, that maybe we will tap into in the future. However, the transport of the energy could be now the main constraint. Making offshore project viable only in areas of high real state prices, making too expensive to build them on land, and therefore making the offshore alternative a sensible one. In those cases the location is mostly dictated by the location of the demand more than the location with higher solar irradiation. If I let the imagination loose, maybe those large high-irradiation zones in the Pacific could one day host floating industrial complexes, producing and using the power on the spot for manufacturing or other industrial processes.

1) No, there are many places in the ocean that receive more sunlight hours than many deserts. For instance, the west coasts of southern Africa and central South America. These locations are influenced by the very cold antarctic currents and high pressure from Hadley cells.

2) That very much depends on location. In general, a warm ocean will be cloudier than a cold one. The equatorial waters are particularly cloudy, while subtropical waters are generally less cloudy. Meanwhile, some land areas are very cloudy much of the year. For instance, Washington state is cloudy more often than not. Mountainous regions are also often cloudy.

3) Most of the incoming reaching the Earth's surface falls on the oceans. That is mostly due to the surface area of the oceans (~2/3 of the Earth).

Not the answer you're looking for? Browse other questions tagged meteorology oceanography geography sun solar-terrestrial-physics or ask your own question.

18
Where is the calmest place on Earth?

2
Why are oceans so deep?
9
Long-term Wind Speed Forecasting: reality or wishful thinking?
6
Why are deserts hotter than other places on Earth
7
How can we calculate the temperature of the atmosphere, including the greenhouse effect?
2
How quickly can coral fossilize?
4
Effective Temperature of a Planet and Surface Temperature due to Greenhouse Effect
4
What is the most optimal latitude on Earth for the generation of extreme maximum temperatures?
20
In the northern hemisphere summer, why are places in the north cooler than those in the south?