If Earth had rings would gravity exerted by Earth decrease?

If Earth had enough mass in its own rings, more than the weight of Earth: 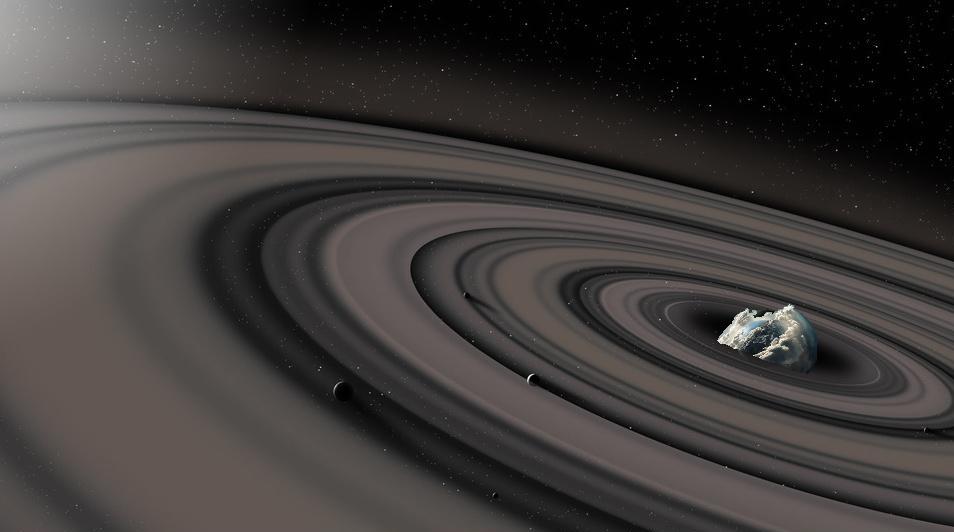 Rings wouldn't decrease the gravity much, but the exact amount would depend on the exact geometry of the rings. One reason is that the gravity of one side of the ring would partially cancel the attraction of the other side. In a similar fashion described by the Shell theorem demonstrated long ago by Newton and proving that if you are inside a shell of mass the gravity effects from one side cancel the other, therefore it would be no gravity inside the shell. However, in the case of a ring the forces only fully cancel at the very center. Nevertheless, partial cancellation of forces would make that the gravity of a "Earth's mass" ring would be much weaker than the one of an "Earth's mass" planet. For the rings to significantly reduce the acceleration of gravity on Earth's surface you would need super-massive rings (and note the rings with the mass of the Earth would fall in this category), something that is extremely unlikely, as such massive rings would coalesce into moons. In the case of Saturn's rings, they only have the equivalent to a 0.000005% of the mass of Saturn. If such super-massive rings coalesce into moons, those moons could be more massive than Earth's itself, so Earth would be orbiting the moons more than the other way around. More precisely you would have a chaotic multiple-body system, in which Earth would be just one of the bodies.

It is worth noting that even our moon doesn't have much of an effect in the acceleration of gravity despite the mass is fairly large (1.2% of Earth's mass) and it is all concentrated in one place (instead of distributed in a ring). The mass of the moon is 7.3e22 kg, which is for comparison about 2000 times more than the mass of Saturn's rings.

In the case of the moon for instance, your weight doesn't change at all in high or low tide. That's because the scale that measures your weight, and the ground under it are all suffering the same tidal effect than you, so the force your mass put on the scale is unaffected by the presence of the moon. And the same would be true for your hypothetical super-massive rings.

Regarding to your second question, for all the above, I doubt it would change significantly the thickness of the atmosphere.

Now, when it comes to weather it is a completely different story. The presence of the rings could strongly decrease the amount of solar radiation reaching the tropics, therefore it could change the whole global atmospheric circulation pattern, maybe the Hadley cell wouldn't form as we know it, changing the climates worldwide.

Not the answer you're looking for? Browse other questions tagged meteorology earth-history weather-forecasting gravity evolution or ask your own question.

11
Change in earth mass since the time of the dinosaurs
27
Is a complete global flood physically possible on Earth?
7
Compute direction of gravity vector
1
Extraterrestrial Planetary Sky Color: does it have to be blue?
11
What is the fastest the Earth has ever spun?
5
Plate Tectonics vs Gravity for Creating Highs and Lows
14
What is the pressure at the center of the Earth?