The end of the Tethys Sea and the initiation of the continent-continent collision that formed the Himalayas is thought to have happened about 65 Ma ago (recent studies suggest maybe only 35 Ma). And since then, that colossal collision have produced an estimated 2,500 km of crustal shortening. That means that 2,500 km of continental surface is gone. A fraction of it was maybe subducted, other fraction squeezed under the other continent and perhaps the larger fraction shortened by thrust and folding. This massive transformation would have been enough to erase a preexisting volcanic arc, that could easily end up under kilometers of rock that came from sediments in the Tethys sea or the sourthern edge of the Eurasian plate (for example mount Everest summit is mostly composed of sedimentary rocks with fragments of trilobites from the Tethys sea).

Nevertheless, part of that volcanic arc indeed is visible now in the surface. No volcanic edifice have survived the cataclysm that give rise to the Himalayas, but the rocks that formed the arc are now known as the Dras Volcanics, a band of volcanic basalts and dacites outcrops that are part of the Indus suture zone. And that are though to originate in the Mesozoic (from about 252 to 66 Ma ago) volcanic arc that existed in the Eurasia plate as a consequence of the subduction of the oceanic crust under the Tethys sea.

This geological map of the Himalayas shows in geen the outcrops of the Indus suture zone. 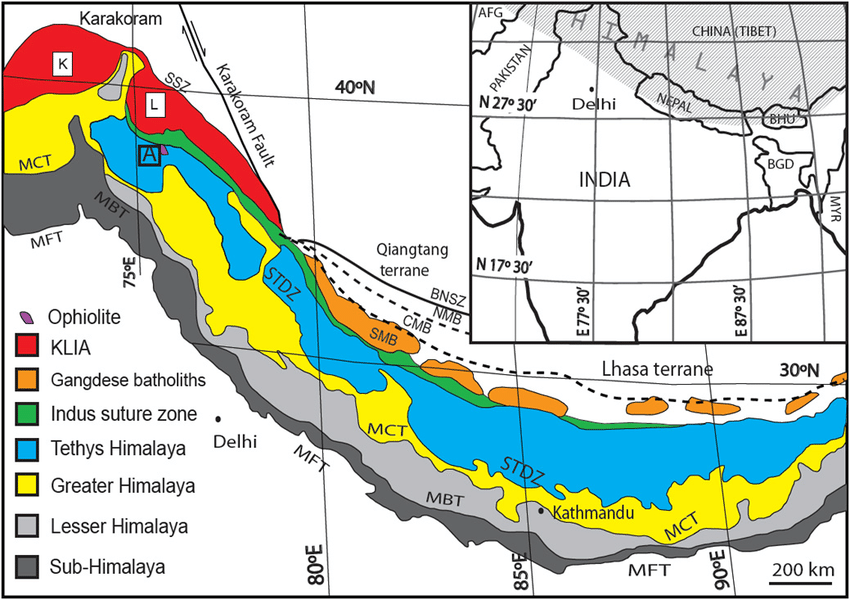 Not the answer you're looking for? Browse other questions tagged geology volcanology plate-tectonics mountains subduction or ask your own question.

3
When did the proto-Himalayas become non-volcanic?
2
Movements of the tectonic plates - collison between Indian Plate & Eurasian Plate

8
What are the geological mechanisms for sea floor spreading in the Bismarck Sea?
13
Has an entire plate ever subducted?
4
Where are these volcanos as seen in this space tweet?
10
Do Tectonic Plates Merge?
4
What will happen to the Indian plate after it slides under the Eurasian Plate?
3
Slab-breakoff - always connected to continent/continent collision?
3
When did the proto-Himalayas become non-volcanic?
12
Why are there no volcanoes where continents collide with each other?