Is Atacama Desert cloudy or cloudless most of the year?

I saw many contradictions everywhere.

For example, my geography textbook says that Atacama Desert is a desert where foggy weather is common, and it persists almost the whole year. Whereas every astronomer will say that it is the place with least clouds and fog, which is why it is one of the best places for astronomical observations beyond the dark sky.

So, which is true? And if one of them is not true, then how did it gain popularity at all?

The Atatacma desert comprise a very large area of more than 100,000 square kilometers, that host very different climates. The main factors driving the climatic variability are the distance to the Pacific ocean and elevation. This latter factor is very strong, as the Atacama desert covers a formidable elevation range, from sea level to almost 7,000 m, at the summit of Ojos del Salado, the highest volcano in the world.

The highest areas, that also happen to be further of the sea, are the driest and less cloudy. The weather pattern you mention of common foggy conditions only happens very close to the coast, extending inland only about 10 km or a few tens of kilometers trough low lying valleys. And is produced by fog that forms over the sea penetrate inland. It is called camanchaca, but it doesn't cross the coastal mountain range.

The pattern of cloudiness throughout the desert can be visualized using a dataset produced by NASA's Surface meteorology and Solar Energy, in particular the satellite derived Monthly Averaged Clear Sky Days (i.e. cloud cover less than 10%) over a 22-year period (July 1983 - June 2005). It has a resolution of 1°, so about 110 km here. That means that the central area of the desert is covered by just 12 cells, nevertheless it will be enough to see the pattern I mention.

The following figure shows the central section of the Atacama dessert using official IGM 1:500.000 maps in the left. And the mean clear skies dataset on the right for the very same area. The numbers refer to the 22-year mean clear sky days per month.

Now the interpretation will be easier if we overlay those two figures as in one as shown below: 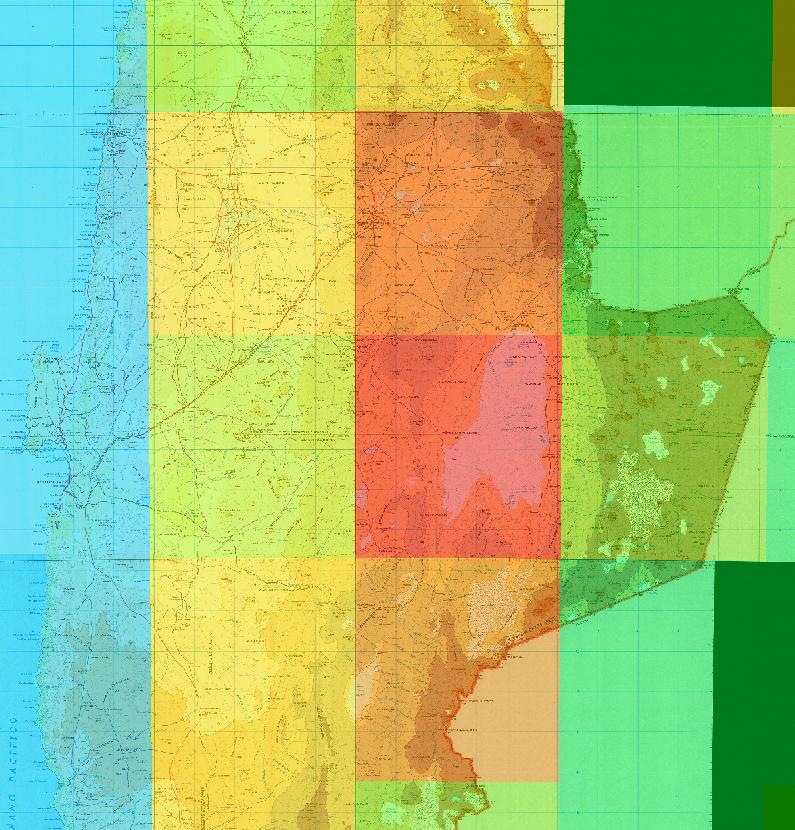 From there you can see how there is a fairly large variability in the amount of clear sky days. From a few at the coast, to about a week over the coastal mountains to about two weeks east of the coastal mountains. Peaking at 17 days per month over the Salar de Atacama (a value surpassed only by the Sahara desert and the interior of Antarctica). Then, it is no coincidence that ALMA observatory, the largest radio telescope in the world, is located there, just east of the salar de Aatacama.

As mentioned before, topography is the main factor controlling this pattern. Even close to the coast, some mountain tops can have remarkable clear sky records, as is the case of the 2,635 m high Mount Paranal were the VLT observatory is located at just 15 km from the coast (falling on the lower left cell with 9 clear sky days in the figure above).

Atacama desert is cloudless most part of the year. Except for the litoral, where a fog from the sea goes inland. This phenomena is called camanchaca. Telescopes for astronomy are located in high places, not only to avoid this weather, but also because at high altitudes the atmosphere is thinner and the weather is dry, both good for observation. Besides, during the night most astronomy observations are done, while the camanchaca is stronger during the morning.

Not the answer you're looking for? Browse other questions tagged climate geography climatology desert or ask your own question.

12
How will climate change affect the extent of the Sahara Desert?
6
Why do winter temperatures account for most of the increase in global temperature?
8
Identifying a desert landform
11
What is this weird looking structure in Ethiopian desert?
3
Is there any place on Earth that is permanently a desert?
4
When was the first not-icy desert formed?
1
Are there areas of desert sands which experience blizzards?
3
How can the Simpson Desert be the largest sand dune desert in the world?
24
How do oases form in the middle of the desert?
1
Arabian Desert rock formation