Are we now and/or have we been in the RCP8.5 scenario?

Is it generally understood that we (globally) have been living in an RCP8.5 scenario over the past 7-8 years?

Such that a predictive climate model using RCP8.5 assumptions that was run circa 2011 can be considered indicative of the time between then and now?

I am working on a calibration of modeled dry-bulb temp data versus real observations over the intervening years but I realize that any correction I come up with would necessarily have any deviation from reality and RCP8.5 baked into it.

In short, I would say that it is too soon to say. But, if I were forced to guess: I would indeed incline to say that we live in a RCP 8.5-ish scenario.

I'm not an expert at all on climate models or RCP scenarios, but I found the question interesting, so this is my attempt to answer it based on the most reliable data sources I found. I hope to motivate expert to jump in to comment, improve, challenge or support this answer.

The scenarios involve future pathways in the emissions of a large range of different chemicals (Greenhouse gases and aerosols), so if we look at how actual emissions of $CO_2$ have matched the scenario we might think we are in one scenario, but is we instead look at the emissions of $NH_3$ we might find ourselves in another scenario. The best way to summarise all those different parameters is to consider the total radiative forcing, that is the combined effect of all those compounds in Earth's energy balance. In fact the numbers that label the different RCP's are the expected total radiative forcing by year 2100 in $W/m^2$.

The following figure shows the radiative forcing (this time as $CO_2$ equivalent) of each scenario. And as you can see, by 2018, the differences are so small that I think it is too soon to say with any reasonable certainty that we are flowing one or another scenario. 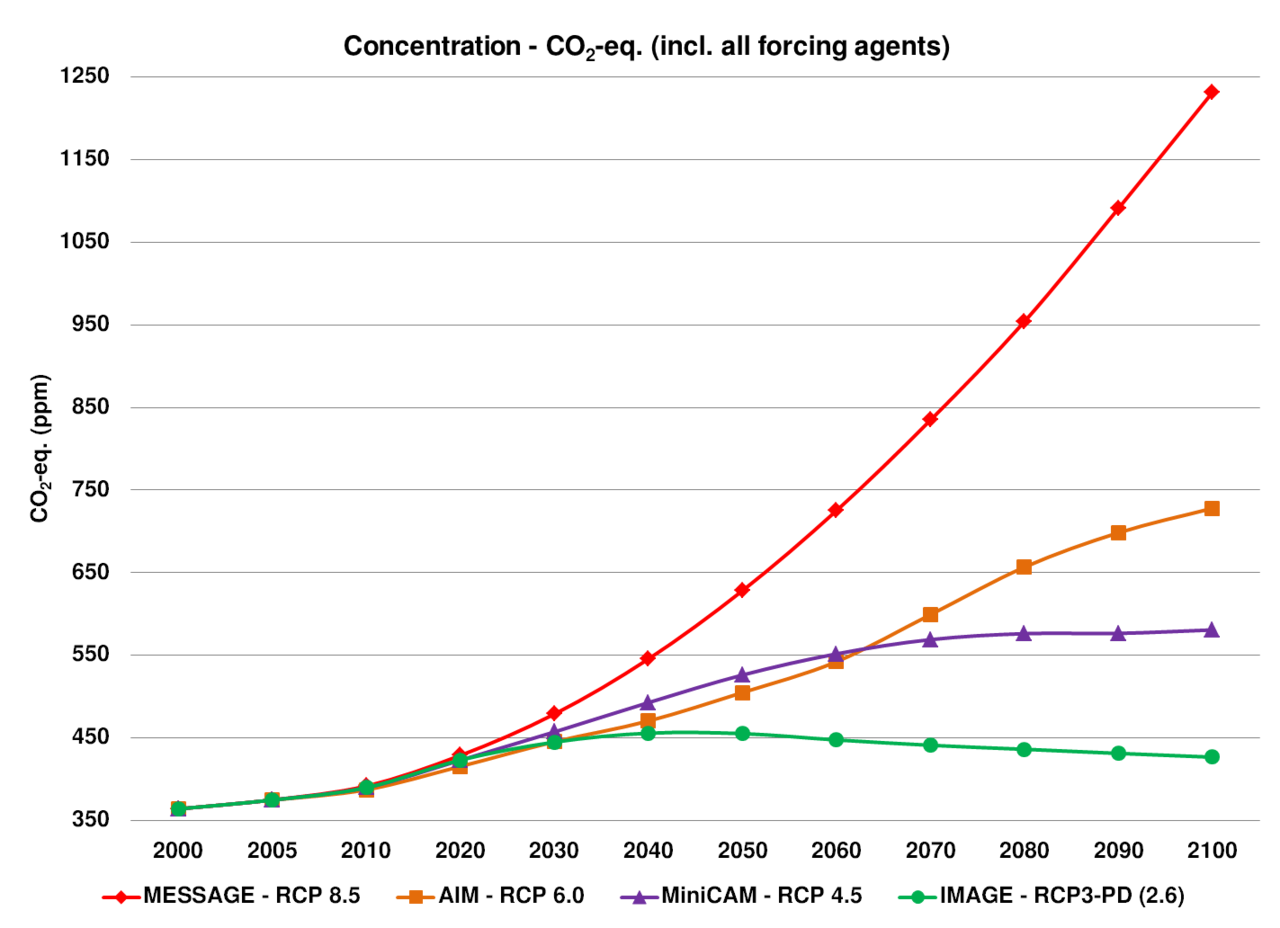 Nevertheless, we can attempt to plot the actual measurements against what was predicted by the scenarios. The best variable to contrast would arguably be the total radiative forcing. However, that is a quantity difficult to calculate and I haven't found published values like those in the IPCC Assesment report 5 (AR5) Annex II table AII.1.2, beyond 2011. Up to that year, the forcings were beautifully summarized in figure 8.18 of AR5 chapter 8: 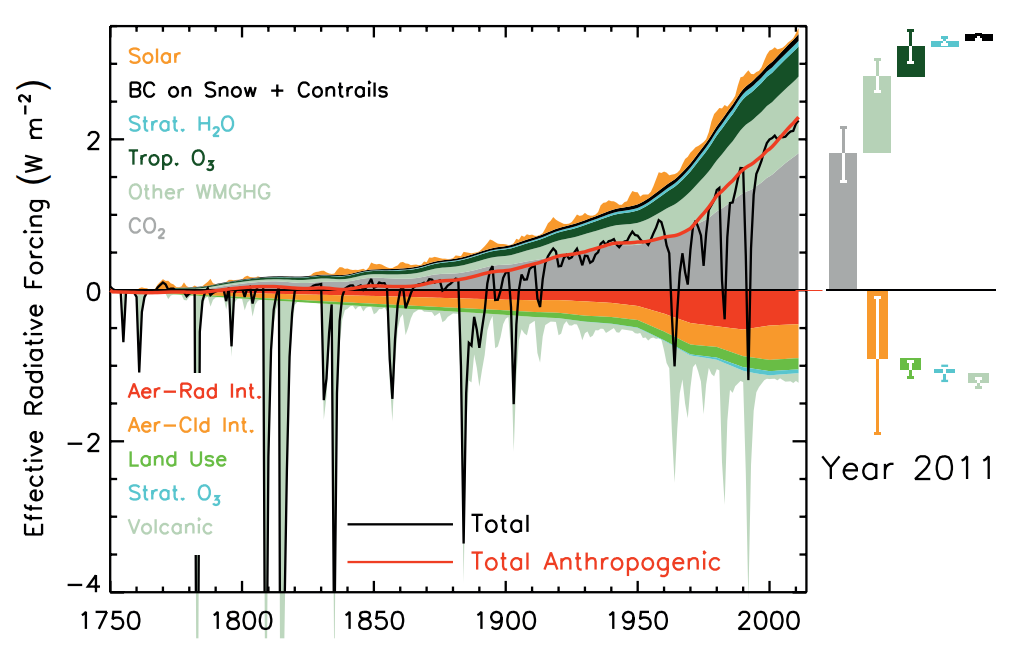 Given the lack of total radiative forcing data, we can instead make the comparison with some other variable. Such analysis will be liable to depend on the chosen variable as pointed out before. Therefore, to minimize that problem let's pick a variable with a large influence in the difference between the four scenarios. I think that would be $CO_2$ emissions from fossil fuels and industry.

The the emissions predicted by each scenario can be obtained at the RCP Database (version 2.0). That data looks like this:

Now, for the actual estimated emissions, perhaps a reliable source is the Global Carbon Project, that provide the emissions data up to 2016. Putting all that together we get the following figure: 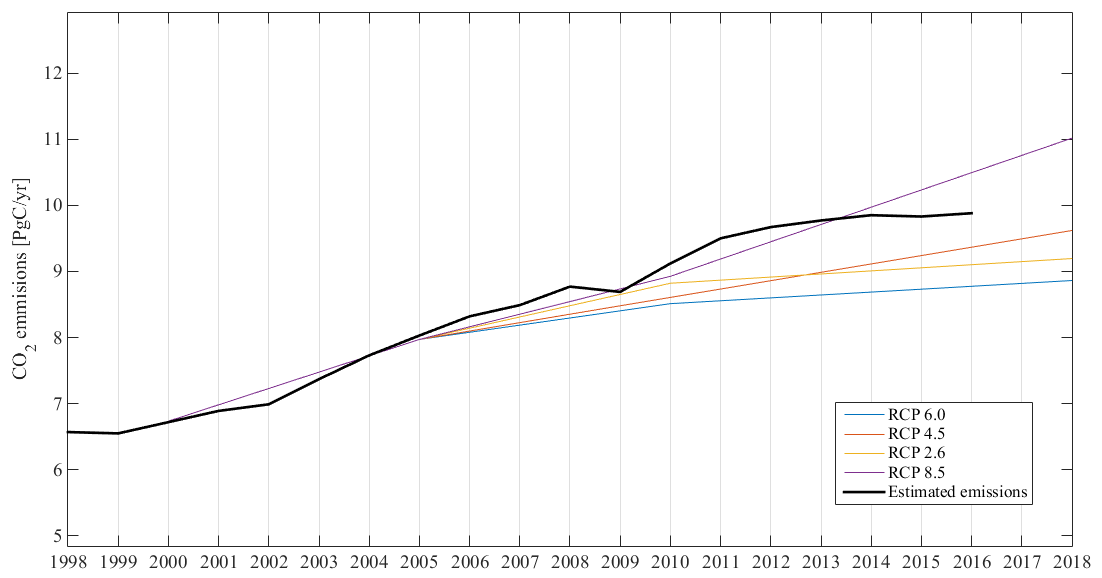 So, it looks RCP8.5-ish, but the differences between the scenarios are still quite small, so it is difficult to say.

Another good variable to compare would be $CO_2$ concentration, that can be directly measured instead of just estimated. In that case using NOAA's Global Greenhouse Gas Reference Network data for global $CO_2$ concentration, against the ones prescribed for each scenario (taken as well from RCP Database (version 2.0)) the figure looks like this 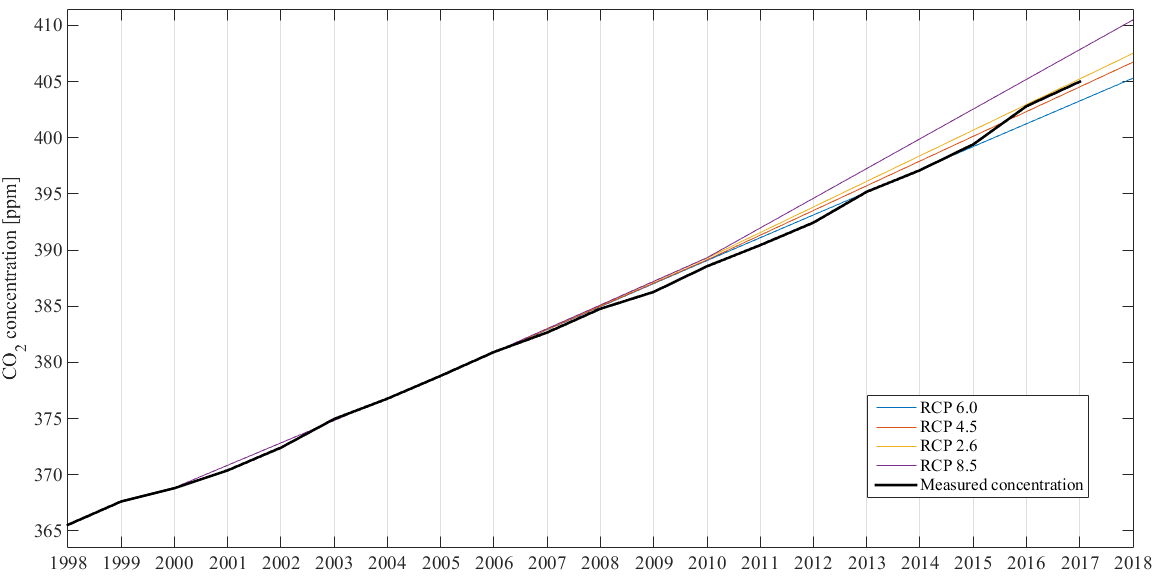 Another approach would be to use use an actual climate model forced by RCP8.5 (not just the RCP), so you can compare mean surface temperature, but that would be tricky for many reasons and also model dependent.

If anybody knows of published estimated total radiative forcing from 2012 onward, that would be nice to add and compare. It might make the answer a bit more clear but I think that in any case, it is too soon to give a definite answer.

Not the answer you're looking for? Browse other questions tagged climate-change temperature models climate-models or ask your own question.

6
Have there ever been any islands that disappeared due to rising sea level?
17
Is 2015's record average temperature evidence that we are now experiencing runaway climate change?
3
What would be the sea level rise if all fossil fuel resources are burned?
5
Would adding sulfur dioxide to the atmosphere have a global cooling effect?
4
What are the formulae for calculating the thermal heating effect of back radiation in greenhouse gases?
3
Calculating 30% less solar energy. Provided the math is right, would there have been liquid water on Earth?
5
Why is it that “With higher CO2, the dry gets drier and the wet gets wetter”?