Is it true that "All life on earth gets its energy from the sun"? How much biomass is not derived from photosynthesis?

In helping my son with his college biology I ran across some statements that I think are wrong according to updated data. The copyright is 2017 so it is supposed to reflect the most current knowledge.

We know this is not true since extremeophiles that thrive on alternate energy sources were observed in the deep ocean volcanic vents where no sunlight can penetrate and in subterranean environments.

In fact, it is speculated that the subterranean biomass is greater than the familiar surface biomass of the earth. What are the most recent estimates of the size of biomass that does not derive it's energy from the photosynthesis originated food chain?

As you say, the existence of organism that live out of chemical compounds expelled by hydrothermal vents (Chemoautotrophs), immediately render the sentence "All life on earth gets its energy from the sun" as an approximation. However, some approximations are pretty good for all practical purposes. Nevertheless, this approximation (even if right), have some deep implications when it comes to assess the likelihood of life in other celestial bodies, like Jupiter's moon Europa, which is the kind of concerns through which I got involved into this topic.

First, there is a very important distinction to make regarding your question, that is really about

biomass that does not derive it's energy from the photosynthesis

As you describe it. But that's very different than "subterranean biomass". In particular, the following sentence that you mention:

...it is speculated that the subterranean biomass is greater than the familiar surface biomass of the earth.

Refers to the biomass within soils (i.e. roots, fungus, bacterias, arthropods, etc.), which is indeed very large. You might include deep ocean ecosystems also. But in all those cases, the energy used by organism was originated by photosynthesis and ultimately by the Sun. The energy get to those sub-surface ecosystem in the form of buried dead organic matter or marine snow. Some works hypothesize about other massive subsurface ecosystems living deep within the oceanic crust, hosting perhaps up to 1/2 to 2/3 of the global biomass. However, as pointed by Whitman et. al. (1998) (the source for the above figure): "current evidence suggests that most of the subsurface biomass is supported by organic matter deposited from the surface". Therefore, it would constitute just one more photosynthetically supported ecosystem.

That been said, the core of your question is "What is the size of biomass that does not derive it's energy from photosynthesis?" And that can be boiled down to: What is the fraction of global net primary production that come from chemosinthesis?.

I don't know of any estimation of that fraction, but to calculate an upper limit for it should be pretty straight forward, at least to have a sense of how good is the approximation of saying that "all life gets its energy from the sun", and how important could be chemosynthesis for the global biomass at most. Let's crunch some numbers:

First consider how much energy is there available for chemosynthesis. To do this it is important to note that no organism can get its energy from the energy gradient within the Earth, so the amount of energy available IS NOT the Earth's internal heat budget. Instead, it correspond to the amount of energy available to life in the form of chemical compounds that come from Earth's interior. According to Gaidos et al., in the most active hydrothermal vent fields, it correspond to 0.157 $MJ/m^2 year$ (read as Mega Joules per square meter per year). The same paper point that

For comparison, the primary production in the upper ocean is equivalent to a biological energy flux of ∼315.36 $MJ/m^2 year$, and this is only 0.01% of the total energy available in sunlight.

However, the upper ocean ecosystem is nutrient limited, so the efficiency could be much higher at hydrothermal vents. Perhaps the most efficient ecosystem is the tropical rain forest, with efficiencies in the order of the few percent (~1-3%). So as we are looking for an upper limit, let's say that the ecosystem at the hydrothermal vents have an efficiency of 10%. That leaves us with 0.016 $MJ/m^2 year$ to transform to organic matter.

Now: How much energy is there in a kilogram of organic matter? It varies, but given we are aiming to an upper limit a reasonable (low) typical value is ~10 $MJ/kg$. 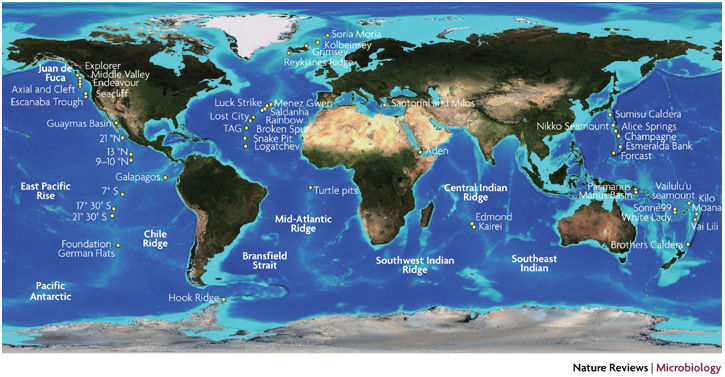 Putting all together, our upper limit for the chemosynthetic biomass would be:

Now, if we compare that with the 1.7$\times 10^{14} kg/year$ that is produced by photosynthetic primary producers. We get that chemosynthesis produce AT MOST a 0.001% of the biomass.

It can be argued that chemosynthesis happens also outside of hydrothermal vents. But those other locations, like geysers and hot springs, are much smaller. Other more extensive chemosynthetic ecosystems have been proposed, like SLiMEs (Subsurface Lithoautotrophic Microbial Ecosystems), but even if they exist over extensive areas, their productivity would be very small.

To summarize, it would be more correct to say that "More than 99.999% of the life on Earth gets its energy from the Sun". And given all the over estimations we made, I would not be surprised if a more detailed calculation would add a few extra "9's" to that figure.

Not the answer you're looking for? Browse other questions tagged biogeochemistry geobiology biomass or ask your own question.