That may sounds like a silly question but here it is.

One of the early great successes of general relativity was to explain the discrepancy between the prehilion advance of Mercury predicted by Newtonian mechanics and the results of its actual measurement.

I was wondering if this kind of effect could have any influence on the climate of a planet experiencing it.

In short: No. Unless multi-million timescales are considered.

The reason we keep teaching Newtonian mechanics, is because it is a VERY accurate approximation of a more general theory (general relativity) within the regimes of speed and gravity acceleration found in everyday life. Therefore, all the relativistic corrections to Newtonian mechanics in the Earth system are negligible. Both, for the internal operations of the climate and for the evolution of its orbital parameters on timescales of hundreds of millennia or shorter.

One effect, would be the minor role that apsidal precession have on the change of distribution of incoming solar energy described by the Milankovic cycles. But that can arguably considered negligible.

But perhaps the most important contribution would be the influence of relativistic corrections in Earth's orbit eccentricity variations on multi-million years timescales.

State-of-the-art orbital solutions for the long-term motion of the Earth like La2010, do use relativistic correction, however they are rather small. The way the corrections are included in the model are described by Saha & Tremaine (1994), where they point that:

Meaning that the correction correspond to a 0.000001% of the total variation of the orbital parameters. Unquestionably, even such small corrections have a cumulative effect over multi-million years timescales. Varadi et. at. (2003), compares the output of a model using relativistic corrections (solid line) with one not using them (dashed line), and the following figure show the results over 3 million years, where can be observed that significant differences arise after 300,000 years. 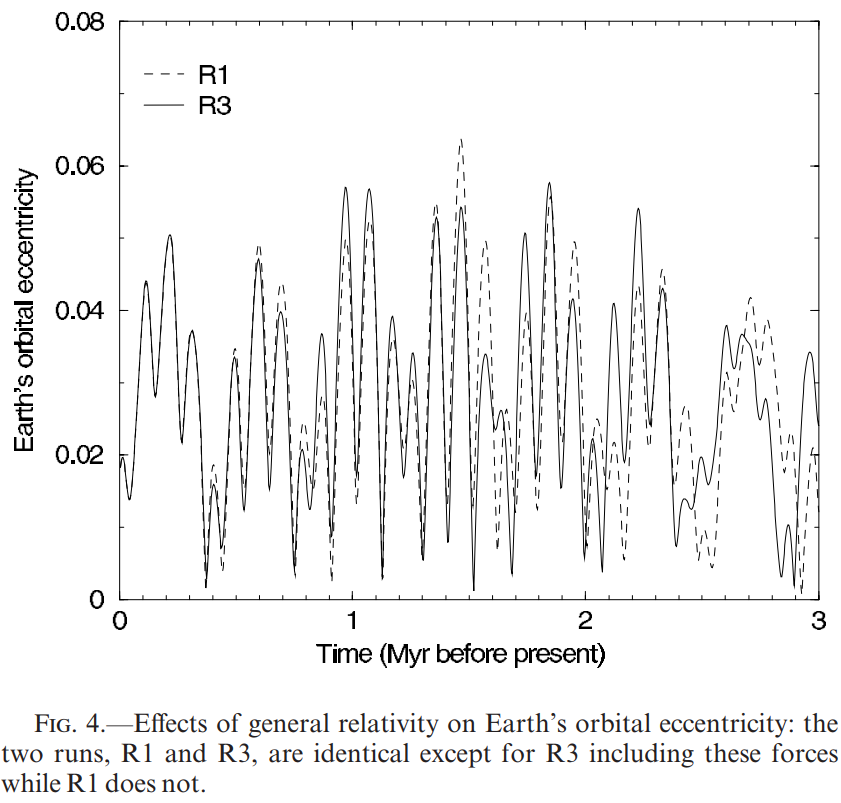 However, it is reasonable to consider that such small corrections would have been overcome at some point in the past by some other unaccounted effects, like large meteorite impacts (or fly-by), solar storms, etc. Remember that La2010 go back 50 million years and other models go back several billion years, when such events were rather common. So, I would still argue that relativistic corrections are not very significant. However, in a chaotic system like Earth's climate, you can never rule out that a negligible forcing could have had an important effect.

Of course the answer would be different (and the relative importance higher) if we consider a planet orbiting extremely close to a super-massive star. But, I'm assuming you are mostly considering planets similar to Earth in that regard.

There are also some claims (the Damhsa Theory) that gravitational waves might have play a role in the very long term climate evolution of Earth. However, I'm not capable to really assess the validity of such theory, but I have to admit I'm skeptical about it. I've posted a question about that in Physics SE, an there seem to be wide consensus that such effect would be exceedingly small to ever deserve any kind of consideration.

The latest positions that I am aware of say yes, but not in any useful way.

From what I have read, the current prevailing opinion is that the weather of Earth is a chaotic system. Chaotic systems are known to be very sensitive to initial conditions. Eddys in the atmosphere that are mere milimeters in size may change whether it rains or shines on the other side of the planet in a few months.

From this concept, we can assume that GR affects the weather. However, we have to be cautious with what we draw from that conclusion. I believe it was von Neuman who is quoted as saying that when he first heard of the idea of weather as a chaotic system, sensitive to initial conditions, he had the idea that we might soon have weather control simply by doing small adjustments. Only later did he finally understand chaos theory: such perturbations were like giving a well shuffled desk another shuffle. It certainly changes your luck, but you couldn't possibly know if it was for better or for worse.

So to your question, as to whether GR would have any effect, the answer is yes. If you were to rephrase the question to ask whether it had any measurable effects that might be tested with empirical evidence, then I would have to defer to Camilo's answer.

I don't see this point made, so I'll just add it. In very high gravitation situations orbital energy can be lost to "relativity" or more specifically, gravity waves. The primary relativistic effect that the Sun's gravity has on Mercury is an increase in it's precession, as @CamiloRada pointed out, and see more details here.

A secondary relativistic effect is orbital decay, or spiraling in. This is observable in tight orbits around neutron stars or black holes. The effect around a regular star would be tiny but non zero.

This article gives some numbers for this effect on the Earth.

Gravitational radiation is incredibly subtle and weak in its effects. The Earth, as it orbits the Sun, loses energy due to this radiation and spirals inwards. But it will take 10^150 years for this process to occur.

That's a preposterously long period of time. Mercury would certainly be effected significantly more than Earth, (I can't do the math, maybe someone here will step up), but even at mercury distance the energy loss to gravity waves and spiraling-in would be slow to the point of irrelevance compared to other effects.

Our sun, for example, grows larger and brighter over it's lifetime. Planets atmosphere's change, either stripped off or in the case of Earth, affected by photosynthesis and other processes, and the Sun loses mass over it's lifetime, which causes the planets, on average to move outwards, though inward migration is also thought to be possible and the planets can affect each other's orbits. These changes to climate are all likely to be significantly greater than relativistic spiraling-in.

For maximum "spiral-in" effect, you'd probably want a small star and a planet with a very tight orbit of just days, but even that would likely be too small to have significant effects and a planet that orbited faster than it's star rotates would likely experience some tidal forces drawing it inwards. The tidal drawing-in would likely be far greater. It's hard to imagine a situation where the relativistic spiraling-in would have much effect between a planet and star.

Now a planet in a super-tight orbit around a white-dwarf star . . . maybe, but the planet would likely get torn apart inside the Roche limit long before you got it close enough for any measurably interesting relativistic spiraling-in.

A word on precession, precession affects the Earth's climate because the Earth has a land dominant hemisphere and a water dominant hemisphere. Precession also works with the seasons leading to warmer or colder winters or summers. If there's low axial tilt, then precession won't have much effect on a planet's climate. Mercury has minimal axial tilt and no significant variation between it's two hemispheres, so it's unlikely that Mercury's precession changes it's climate much. Certainly not like the effect it has on Earth, such as turning ice ages on or off.

Precession is also mostly Newtonian. Relativity just adds a percentage point or two to the rate of precession in the case of Mercury.

Not the answer you're looking for? Browse other questions tagged climate paleoclimatology astronomy milankovitch-cycles orbit or ask your own question.