How did CO₂ originate on Earth before there was life?

Is this the answer?

The answer is Volcanos. There might be other inorganic processes capable to produce $\text{CO}_2$, but on Earth, the main inorganic source of $\text{CO}_2$ are volcanoes.

In some period of Earth's history, there is evidence of large glaciations events, some of them are thought to have been triggered by the lack of $\text{CO}_2$ (like the Snowball Earth and Permo-carboniferous glaciations), and volcanoes are with no doubt the main candidate to have been responsible of restoring the warm climate by feeding large amounts of $\text{CO}_2$ into the atmosphere over millions of years.

$\text{CO}_2$ is an important component of rocky planets, but it is mostly dissolved (in large quantities) in the magma that exist (or once existed) in the interior of such planets. However, when the magma rises close to the surface, the drop in pressure reduce the solubility of $\text{CO}_2$ and it form bubbles of gaseous $\text{CO}_2$, that can then be expelled into the atmosphere trough volcanic eruptions, that in addition to teprha, and rocks include large amounts of volcanic gases of which $\text{CO}_2$ is one of the main components. Probably that process of exsolution of $\text{CO}_2$ from hot molten rocks was happening even before the existence of volcanoes as we know them.

The same process happened once in Mars and Venus, whose atmospheres are composed mostly by $\text{CO}_2$ (96% and 96.5% respectively), suggesting that abundant $\text{CO}_2$ was also present in the early Earth's atmosphere.

Currently, it is estimated that volcanoes input to the atmosphere about 100 million tons of carbon in average per year in the form of $\text{CO}_2$, as illustrated by this NASA figure of the Carbon cycle: 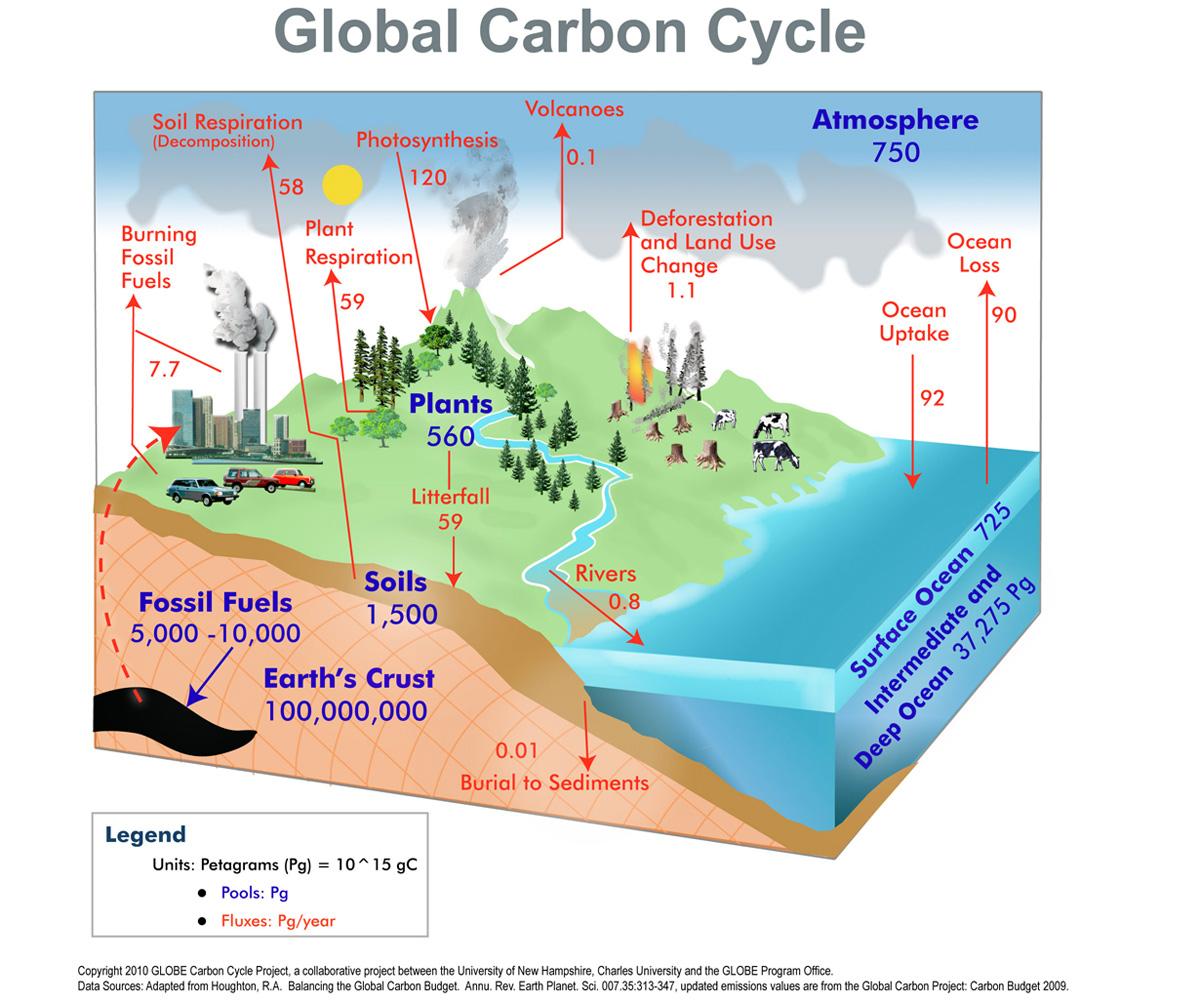 You can see that many processes move carbon around, but the main reservoir by far is the crust, and that reservoir is tiny compared with all the $\text{CO}_2$ stored deeper in the Earth's interior.

Finally, in addition to be required by photosynthesis, $\text{CO}_2$ is part of the Earth's thermostat, that together with the silicate weathering have been key to keep the Earth's temperature in the range of liquid water. Arguably another very important need for the existence of life as we know it.

I thought they where always present. Methane has a higher effect on Earth? When the carbon dioxide is high enough it will eventually warm the Methane to melt at the poles which then would cause the bulk cloud cover triggering an ice age which then freezes the carbon dioxide and methane again. Methane takes for longer to be absorbed by the ocean and Earth like carbon dioxide. The Earth cannot get to hot or cold because of the balance of the 2 molecules and their role in weather. Plants absorb some carbon dioxide which helps balance this.

Not the answer you're looking for? Browse other questions tagged geology volcanology paleoclimatology atmospheric-chemistry co2 or ask your own question.

34
How and why did the oceans form on Earth but not on other planets?
8
What are the tectonic implications of the Quaternary Igwisi Hills, Tanzania, kimberlite volcanics?
4
What was the density and composition of Earth's atmosphere during the Cretaceous warmest period?
2
How many extreme shifts in climate has Earth gone through in its existence?
5
Does the extension of the absorption line of $\text{CO}_2$ with temperature play a role in the climate change?
2
Is weathering of rock a primary means of $\text{CO}_2$ scrubbing on primordial Earth?
3
Total CO2 is not constant?
4
How hot the earth will be if we have 20% CO2 in the atmosphere instead of ~0.04? and how cold would it be if doesn't have any CO2?
4
How to derive the total potential energy of the atmosphere?