How is ground water mapped?

This is probably a very easy question to answer but how are the USGS maps showing ground water locations mapped? Is it a guy going around taking core samples? Or is it done using satellites and aircraft?

Also related, how quickly do these flows change? Is taking measurements once a year fast enough or does it need to be updated daily?

USGS conducts regular survey in over 20000 wells across the United States. The frequency of data collection depends on the site with around 7000 providing daily data. For some of those wells (currently, 3777 groundwater sites) daily statistics are provided. An increasing number of wells are providing real time (updated every 15 or 30 min) data. 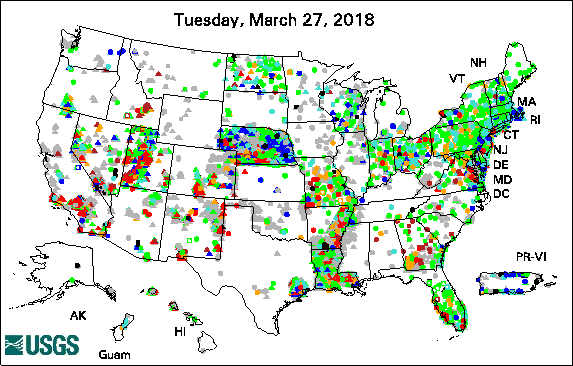 You can visualize the daily changes using this animation.

Go to https://waterdata.usgs.gov/nwis/gw for information as well as the ability to get the data directly from the source.

Groundwater data are collected from wells, as described in arkia's answer. I'll amplify on that answer.

The driller or geologist describes the type of sediment encountered when drilling a well. Sometimes sediment samples are collected for analysis of grain size. Core samples aren't typically collected but may be for special studies. The type of sediment encountered during drilling gives a good idea as to whether a productive groundwater aquifer or the most productive zone in an aquifer is encountered. In addition the sediment samples can be used to determine the best type of well-screen to install.

The USGS or other organization takes this information and geologic maps and maps out the extent of aquifers. Often more than one aquifer is encountered at a particular location and the aquifers are separated by impermeable sediments.

The water level in wells within an aquifer are used to map out groundwater flow directions. Groundwater flow is almost always much slower than surface streams because the groundwater is percolating between the sediment grains. The groundwater level usually changes very slowly, except in some very shallow wells. Daily measurements are usually more than enough and many wells are measured manually less frequently, monthly, quarterly, or yearly, or only now and then. It depends on whether you are interested in seasonal variation or just the general trends.

Not the answer you're looking for? Browse other questions tagged groundwater underground-water or ask your own question.

5
How much time does water takes to reach to the ground?
5
Do Hydro-Carbon extraction units pollute ground water?
2
How come ZamZam water in Mecca never runs out?
2
Searching for ground water
5
Transferring water using underground channel
1
What is the cause of temporary smell and black color of underground water?
1
What effect does concretization (paving/flooring with concrete) has on ground water table
5
Ground water is almost every where, then how do mines and other holes are digged so that ground water doesn't drain into it
2
How to recharge ground water directly from river water