What is an 'obstacle vista diagram'?

Currently I do some research about SODAR and at this paper, the author wrote (p. 1502f):

A site should be relatively clear of obstacles that could act as potential fixed-echo reflectors. If that is not possible, then it is therefore important to construct an obstacle vista diagram prior to sodar installation which identifies the direction and height of potential reflectors in relation to the sodar (Baxter, 1994, 1996). This diagram can be used after some data have been collected to assess whether or not reflections are of concern at some sodar height ranges.

Unfortunately, I can't find any access to the referenced literature and google wasn't helpful either. So, what is an obstacle vista diagram and how to construct it?

Just taking a guess from the context, I think it could be a "view shed", the term used in GIS (Geographic Information Systems) to refer to a visibility analysis. In other words, it is a calculation that determines which areas of a given terrain would be visible from a specific point.

It is used to know, for example, what would be the coverage of a radio transmitter on a given location, or from which areas would a lighthouse not be visible, etc. To calculate such diagram you need a DEM (Digital Elevation Model) of the area.

To give you an example I just loaded a DEM and run a calculation (using Global Mapper) of the areas visible from a 20 meters tall tower in the top of a specific hill, and within a 40 km radius. And this is how the results looks like: 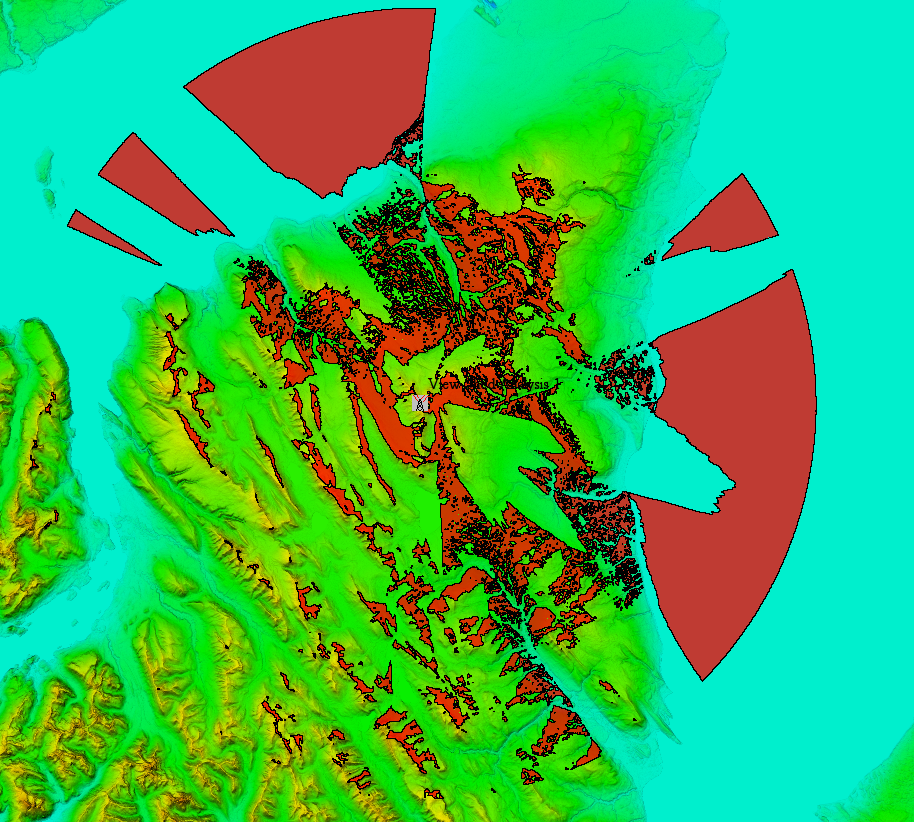 Where the red shading show the areas that are visible from the tower. The rest of the terrain would be hidden behind topographic obstacles.

Not the answer you're looking for? Browse other questions tagged meteorology wind remote-sensing or ask your own question.

16
What do quasi-geostrophic and ageostrophic mean?
11
How can I plot a Skew-T log-P diagram?
13
What color is the Sahara desert, as seen from orbit?
7
Help interpreting a wind rose diagram
4
How to plot a Hovmoller diagram in MATLAB?
7
What is the definition of wind gust?
1
What is the most real-time method of determining SPI?
4
What are the differences between down-looking and side looking radar?