I am looking for a video of global cloud cover. Something like an animated version of this image:

Any ideas of where to find such video?

That kind of "moving clouds animation" is a very common one, as it is used routinely to aid in weather forecasting. However, it is not very common to see it in a whole-world geographic projection as the example you show, I'll elaborate later on why that's the case.

Traditionally, a common source of "cloud animations", have been NOAA's geostationary GOES satellites, in operation since 1975, with 17 satellites launched so far and more to come.

If you are looking for visually compelling animations, the latest GOES-16 satellite is capable of producing color images of the Earth's disk every 15 minutes at a resolution of 0.5 km per pixels (at the equator). They look like this: 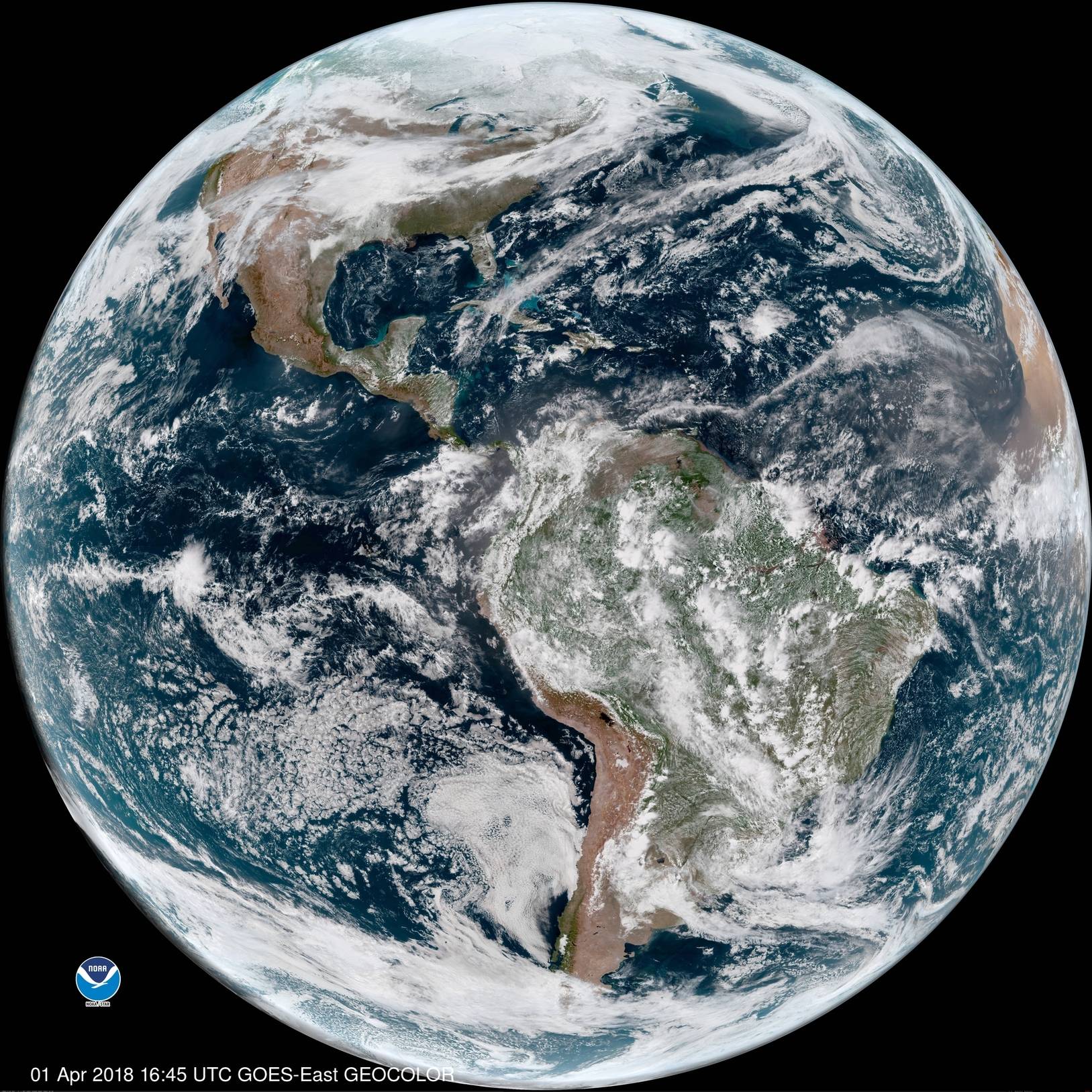 And you can access images and animations pretty much right after acquisition, here is an example of the 24 hours before I posted this (reduced to a 20% of the size due to Stack Exchange upload size limits):

You can see updated animations at any time on the GOES-East Image viewer. More traditional, B&W images (infrared band) can be found in the NOAA GOES page, or many other weather data sources. Also, beside GOES satellites there are many other geostationary weather satellites that cover different parts of the globe.

The reason images like the one you posted are rare (whole-Earth images), is because these kind of images are either taken from:

Worldview is a great source of such multi-temporal composites, and as an example, here is a preview of yesterday's cloud cover by Suomi:

Worldview also allows to produce animations of the cloud cover spanning several months at one day interval. You just have to click on the video icon in the lower left and select the dates interval.

Another interesting one, that also allow for animated display is the EPIC camera on DSCOVR satellite. Despite that the time resolution is a bit too low for looking at the clouds evolution, its unique perspective from the L1 point (42 times further than geostationary orbits) allow a full view of the illuminated side of the Earth. In addition from the animation in the link above, this video is also worth checking.

You can also find animations created using models instead of real data. That approach allows seamless global coverage at an arbitrarily high temporal resolution. A nice example is the one year long animation (at one hour time steps) of cloud cover and precipitation created from the NCAR's CESM model.

Just like you, I've been searching for such a video of the cloud cover. I didn't want to mess with the tons of images that NASA provides (and with the blank spot drawbacks that Camilo Rada mentioned in his answer) in order to create my own video, and all I could find were simulations where the cloud cover was not the only layer in the video.

In other words, instead of the black and white system for the frames (that can easily be applied to a custom made globe as an "alpha map video" via libraries such as Three.js), all I could find were videos presenting the final result, where the BW alpha mask was already applied to the Earth map and projected on the sphere.

Luckily, today I found that NASA provides just what you and I wanted ... assuming one knows what to look for. The description of the contents is not that intuitive if you only focus on getting a cloud cover animation, but it's available at NASA/Goddard Space Flight Center Scientific Visualization Studio's Components of the Water Cycle on a Flat Map for Science On a Sphere.

The animation you're looking for is the first in the list, i.e. the "global cloud cover on a flat map with transparency", like you can see from the screenshot below (the animation simulates just one month, but it's enough and also compact for most things):

Or, you could use what I also used before finding the above accurate cloud movement, the Free 4K Animated Cloud Layer for 3D Planet Earth Models posted on Vimeo. The only drawback for this one is that the cloud movement is not replicated according to a realistical Earth model (i.e. clouds spiralling towards NE in the Northern hemisphere, towards SE in the Southern hemisphere, and towards W along the Equator), which is why I preferred the NASA provided alternative.

Not the answer you're looking for? Browse other questions tagged meteorology clouds weather-satellites gis or ask your own question.

2
Making clouds for science project
8
"New" cloud types: Can they be used as markers for climate change observations?
5
How to find Cloud cover data in GFS grib models
3
What could the ball of cloud I saw be?
3
Total Cloud Cover% from NOAA inverted?