How old are Chile's fjords?

Do we have any knowledge about the age of Chile's fjords, more specifically, those found near the Northern Patagonian Ice Field?

Is it reasonable to conclude that they were formed in Quaternary given the fact that there exist glaciers there at this point in time?

The Quaternary is definitely a good guess. But it is difficult to answer your question because the "age of a fjord" is a rather ambiguous concept. Also, I'll asume you are interested in the bedrock topography associated to the fjords, and not only the sea inlets (as in that case they would have formed very recently, just when the glaciers receded enough to allow the ocean water to take their place). With that said let's try to answer the question:

Glacier erosion rates in Patagonia range roughly from a few tenths of millimeters to a few centimeters per year. Faster rates probably happening at the edges of the ice sheets were glacier basal sliding velocities are higher. Long term averages (~10 ka) are probably between 0.5 mm/yr and 1 mm/yr, meaning that in the 2.6 Ma of the Quaternary you would erode just about one to two kilometers. As some fjords can be much deeper than that (when measured from the mountain tops), it is clear that the fjords as a geographical feature are not in steady state, and they are now more dramatic than ever throughout the Quaternary. 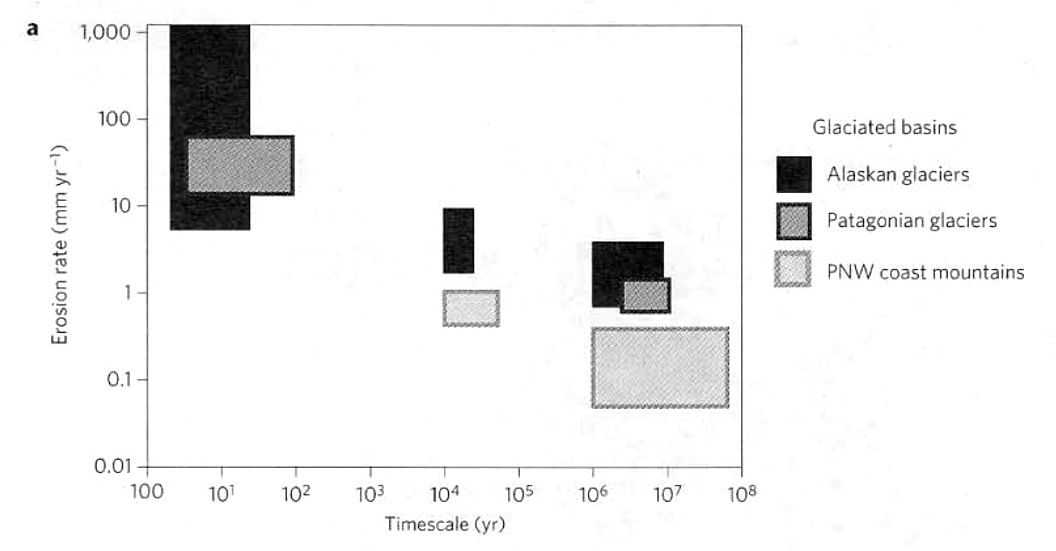 Erosion rates measured in outlet glaciers in Patagonia and other areas in different timescales. From figure 2.a in "The relative efficacy of fluvial and glacial erosion over modern to orogenic timescales" 2009, Nature Geoscience 2(9):644-647.

The reason that explain why Fjords can become deeper than that one kilometer estimate, is the concentrated erosión in outlet glaciers at the edge of the ice sheet. For example, the most visited glacier in the Northern Patagonian Icefield: the San Rafael glacier, show erosion rates of 0.83 mm/year. And as shown in the figure above, outlet glaciers can erode up to ~5 cm/yr at shorter timescales.

Northern Patagonian Ice Field's fjords started to form with the first Pleistocene glaciation at the begin of the Quaternary about 2.6 million years ago, but they have become deeper after each successive glaciation and they are still forming today. Current glaciers are eroding their bedrock at rates on the order of one to a few centimeters per year.

Not the answer you're looking for? Browse other questions tagged geology glaciology geomorphology ice-age glaciation or ask your own question.

25
During the "Ice Ages" or "Snowball Earth" times, where was all the energy?
10
Siberia (Beringia) during last glacier period
1
Reults of the glacials and interglacials of the ice age on the soil
2
What behaviour does an ice sheet exhibit in crossing a cliff?
4
Last ice age: did glaciers move South or move downhill?
22
How does global-warming-triggered ice melting cause global sea levels to rise?