I'm building an R package (https://github.com/ibarraespinosa/wrftools) to read namelist.wps and return a dynamic map which you can make zoom. In my case, it would be very beneficial because writing a namelist.wps can be tricky. The problem is that I need to know the EPSG or spatial reference (http://spatialreference.org/) to transform the spatial data to WGS84. Hence: What are the EPSG code for: Lambert conformal, Mercator and polar stereographic projections

What I want to do is to tell R how to recognize these projections (spatial references), so that I can plot into the map.

Note: The example is from Brazil but the idea is that it can be used anywhere.

If projection is lambert, the EPSG code is XX or the spatial reference is "+proj=lcc +lat_1=YY..." 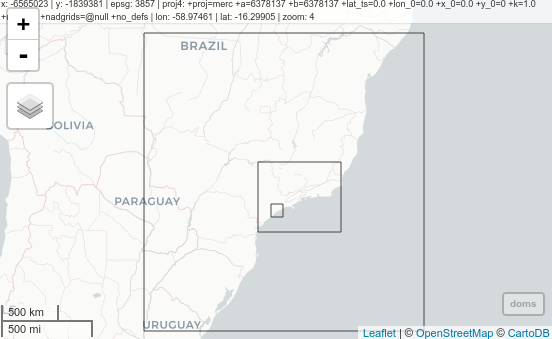 A projection coordinate system is defined by four groups of parameters:

You are saying that you want an EPSG code for projection coordinate systems that use WGS84 as model ellipsoids and Mercator, Lambert conformal conical, and stereographic projections. These projections require additional parameters such as the central meridian and origin latitude. Choice of parameters depends on your region of interest.

You could start with EPSG:4326 which is a geographical coordinate system with degrees as units.

Next, since your region of interest seems to be in the south of Brazil, consider EPSG:32722 that stays for Universal Transverse Mercator zone 22S and uses the WGS84 ellipsoid.

For a Lambert Conformal Conic projection consider ESRI:102015 that stays for South America Lambert Conformal Conic. This spatial reference uses a model ellipsoid that is different from WGS84, so this might be a problem for you. The standard parallel numbers for this projection are 5S and 42S meaning that the distortion would be greater for regions that lie away from these latitude, i.e. the Northern hemisphere or the Antarctic regions.

Finally for a Stereographic Polar you might consider EPSG:3031. An Antarctic Polar Stereographic projection coordinate system that uses WGS84 as a model ellipsoid.

Not the answer you're looking for? Browse other questions tagged meteorology wrf wrf-chem or ask your own question.

13
How to get cell indices from latitude and longitude in WRF model grids?
12
Are the “polar vortex” and “cut-off lows” over/near the Great Lakes new phenomena?
5
What is “focus point” in WRF-plots grid box? (python code)
3
Looking for fun and illuminating weather visualizations
2
Required temperature difference between land and sea for sea breeze
1
WRF/Chem: Editing NetCDF (wrfchemi files) for own emissions
3
Spatial allocation of road emissions and unit conversion
1
Longitudes and latitudes are not regular in WRF-out files