Winter in the Northern Hemisphere in July? Can anyone explain it?

The July 2007 issue of the National Geographic Magazine dedicates several pages to "Climate Change" and "Global Warming". The author explains in detail the Earth's movements and how they provoke great climate shifts. "Wobble" is one of the four movements listed and is described as follows:

Although I know exactly what a top is, and how it spins, I find it hard to understand how wobbling is expected to bring about that forecast.

Can anyone explain more didatically how such a shift is expected to happen? How the wobble movement is doing it?

First, it's probably a bad approach to think of it as a shift. It's a rotation. similar to a spinning top. It's called precession. It's always been there - (so to speak). It's part of Earth's motion.

The Earth is sufficiently massive and space, sufficiently empty that there's effectively zero resistance and the Earth's precession is permanent and largely consistent. (unlike a top that slows down due to friction from the ground and air resistance).

Earth's precession shifts a tiny bit due to the sun, moon and gravity from other planets but those adjustments are very slow and not relevant to your question.

As Earth's precession completes one rotation every 22,000 years (give or take), over a human lifetime that's about 1.5 degrees or 1.5 days, which is pretty small and easily missed by anyone not taking very careful measurements. That doesn't affect calendars however.

Calendars are a little complicated, and I'm not sure it's necessary to go into that in detail for your question. Calendars also can be adjusted to match Earth's orbit. Any un-adjusted calendar will eventually mess things up like putting July in winter, but that has nothing to do with the 22,000 year precession. 365.25 days (a leap year every 4 years), was inaccurate enough to lead to the year that lost 11 days in the UK in 1752.

365.25 days (Julian calendar) is much more accurate than 365 days (which loses a day every 4 years (in effect, a 365 day year would put July in winter in 720 years, not 11,000). Any movement of winter across the calendar depends on how good the calendar is, NOT earth's precession.

365.242 days (Gregorian calendar), or 97 leap years every 400 years is better than the Julian (1 every 4). Having an accurate accounting of leap years and being able to add or remove one as needed, will keep winter in the winter months for as long as we need to, much longer than 11,000 years.

What changes with Earths precession is the position of the stars. The sky will shift depending on where Earth is in it's 22,000 year wobble. Similarly, the North star won't always be the North star. The night sky will look shifted by about 46 degrees in 11,000 years (some of the stars will have moved over that time-frame as well, but lets ignore that for now).

Is such an astronomic phenomenon accepted by scientists unquestionably?

Absolutely, 100%, unquestionably yes. This is accepted, measured, confirmed and can be modeled and explained. It's 100% accepted science. Even the ancients were able to observe this with careful measurement, though they couldn't accurately explain it.

If winter is expected to be in July 11,000 years from now and such a shift is under way right now, does it mean that winter in the NH is slowly moving towards July and that, perhaps, 5,000 years from now winter solstice will be in March

As the assumption is flawed, then both no and yes. With an imperfect calendar, then this would happen and the rate would depend on the accuracy of the calendar as noted above (not precession).

Because we use a very accurate calendar that allows for adding and removing a leap year as needed, no "drifting" of the solstices across the months will happen. There will be some yearly variation as the solstice is a precise point in Earth's orbit, so it happens not only on a day but at a precise time, it might be December 21 one year and December 22 the next year, but every year our calendar gets "messed up" by about 6 hours, and every 4 years, that 6 hour error is mostly corrected. Jupiter also accelerates or decelerates the Earth in it's orbit and Earth's orbital speed varies depending on how close to perihelion and aphelion, so there's some variation year to year, but there's no movement across the calendar over 11,000 years.

Due to Axial precession the Earth's axis changes direction with a period of 26,000 years as in the diagram: 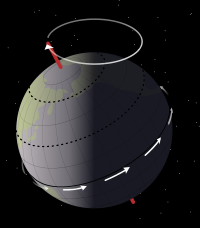 If our calendar was defined by the position of Earth in it's orbit relative to the "fixed" stars, the North Pole will be tilted away from the sun in July 11,000 years hence. However, according to Will the seasons change due to precession?

Not the answer you're looking for? Browse other questions tagged geophysics climate-change climate-models or ask your own question.

6
What is the significance of the "super historic" rainfall for July 2015 in southern California?
6
Why do winter temperatures account for most of the increase in global temperature?
16
How do the known abrupt climate change events fit into the xkcd Earth temperature timeline?
2
Is winter hotter at the Equator?
2
On what basics, can scientists predict the effects of climate change?
1
Can anyone explain the reason why CO$_2$ increases global temperatures (not the simplistic greenhouse analogy provided for public consumption)?
2
Looking for the mathematics so I can run climate change simulations