How Hot was the Oligocene?

When studying the paleoenvironment of the Oligocene epoch, a period in Earth's history spanning from 34 to 23 million years ago, I had a really hard time understanding what the climate was like in comparison to today:

This statement from Wikipedia struck me as vague and therefore confusing. So in plain, simple English and in general, what was the climate of the Oligocene like in comparison with today's climate? 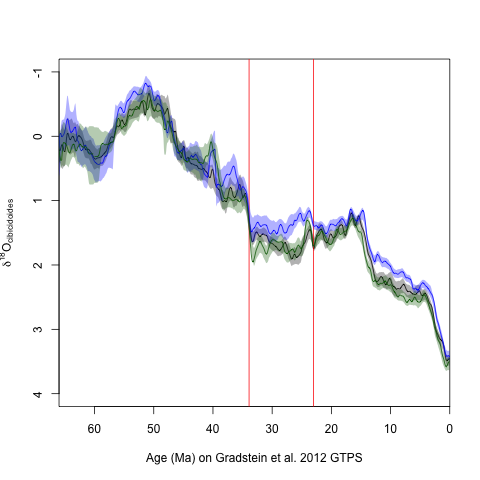 Modified from Cramer et al. 2009 by adjusting to the Gradstein et al. 2012 timescale. In black, it is the Pacific trend; in blue the North Atlantic and in green the South Atlantic.

This graph shows the Cenozoic variations of $\delta\ce{^{18}O}_{Cibicidoides}$ according to Cramer et al. 2009. This proxy is thought to vary according to variations of deep sea temperature (to simplify) and thus should reflect the climate state at a given time. As negative values of $\delta\ce{^{18}O}_{Cibicidoides}$ corresponds to warmer temperature than positive ones, the graph is oriented accordingly. I highlighted the beginning (33.9Ma) and end (23.03Ma) of the Oligocene in red.

The Oligocene starts with a rapid cooling (linked to the East Antarctic glaciation, see for instance Kennett 1977, Zachos et al. 2001, De Conto & Pollard 2003). Yet as you can see on the graph the temperature is still warmer than the late Miocene to Recent period. Some regional trends then show a moderate warming at the end of the Oligocene that culminates in the middle Miocene climatic Optimum, ca. ten million years later.

Short answer (this is essentially what the paragraph is saying):

The wikipedia article fails to tie those various ideas from studies together with any finesse at all. I did it using bullet points.

I had a chat with a professor friend of mine. Basically "stepwise" means, you ignore the statistical noise and work the numbers down from a bunch of scattered points into a neat single line. It's usually called stepwise regression or sometimes, stepwise modeling.

"Stepwise climate change" basically means: 'using a stepwise regression model on global climate temperature estimates based on Oxygen 18 concentration in dated sediment". That's clear enough to anyone who speaks the language but "stepwise climate change" is unclear to most of us and Wikipedia probably shouldn't use the term without explaining it.

Stepwise models are useful for visualizing information but they oversimplify and can be flawed. Earth's Milankovich cycles during ice-age epochs (like the one we're in today) can fluctuate Earth's average global temperature by as much as 4-5 degrees Celsius due to significant changes in albedo as a result of significant variation in ice-cover and other factors. During non ice-age periods, that variation is less, but there's still natural variation of perhaps 1-2 or 3 degrees which occurs every 40,000 to 100,000 years or so, depending in part on the location of the continents, shape of the oceans and whether or not glaciers and sea ice can form.

It's difficult to pinpoint and incorporate 40,000 - 100,000 year cycles into a model that shows 66 million years of global temperature history, especially when the margin of error for dating is as large or larger than the orbital periods. The stepwise reduction approach is useful in that it simplifies average global temperature into a neat and tidy line that filters out variations and in a sense, averages out any effect from orbital cycles. We could barely see 40,000 years on a 66 million year chart anyway and trying to work in 10-25 orbital variations per million years would be extremely difficult. The stepwise approach produces a nice and neat line graph as opposed to a scatter plot.

The Paleogene period (23.03 to 66 mya), can be broken up into 3 segments, the Paleocene, the Eocene and the Ogliocene. The first 11 million years of the Paleogene experienced a warming trend, so when the article talks about the Paleogene cooling, they're talking about 55.5 to 33 mya.

The Paleocene (55.5 to 66 mya), Earth got hotter, peaking as the Paleogene-Eocene thermal maximum, sometimes abbreviated PETM, which peaked at about 12 degrees C warmer than 20th century average temperature.

The Eocene (which the paragraph unnecessarily calls the Paleogene general temperature decline), 55.5 to 33.9 mya, was, needless to say, a period where the Earth cooled.

The Ogliocene, 33.9 to 23.03 mya, was, loosely speaking, the end of that cooling trend. (It was obviously much more than just that, but I'm interpreting from the initial paragraph in the question)

Breaking down the paragraph

A number of other articles, including Wikipedia give the start of the Ogliocene as 33.9 mya. And if we take 400,000 years preceeding from the 33.5 mya mentioned in the paragraph, that works out nicely to 33.9 mya.

The paragraph seems to be saying that there was an 8.2 degree drop culminating in the period 33.9 and 33.5 mya. Presumably that drop is from the peak temperature at PETM. And following that 400,000 year period of colder temperature at the start of the Ogliocene. Then there was a 2 degree (warming?), or 2 degree variation, beginning around 33.5 mya. The article mentions 2 degrees and implies but doesn't specifically say that it was 2 degrees of warming. The line-chart shows a slight upward trend and some variation following the initial drop 33.9 to 33.5 mya.

The stepwise climate change began 32.5 Ma and lasted through to 25.5 Ma, as depicted in the PaleoTemps chart

This line is fine. It indicates that during the 400,000 year cold period (presumably 33.9 to 33.5 mya), ice formed and sea levels fell, a total of 55 meters compared to 2.2 million years earlier, when, presumably, there was little or no glacial ice. Comparing sea level to a seemingly random date 2.2 million years before is fine. There's nothing wrong with picking an earlier date for comparison. (so long as it's not cherry-picked).

. . . with a closely related (25.5–32.5 Ma) temperature depression. The 7-million-year depression abruptly terminated within 1–2 million years of the La Garita Caldera eruption at 28–26 Ma

Again, the article just skips a million years to 32.5 and here it mentions a temperature depression, and I'm going to pull the first sentence up here:

This is very confusing, because the paragraph mentions the temperature decline being interrupted, then, a little later, it calls that same period a "temperature depression". That's unclear to the point where I want to say it's a writing error.

The "the La Garita Caldera eruption" part is fine, which ended the so called "temperature depression" and warmed the Earth up a little. Now, if you look at the line chart, between 33.9 and 28 (give or take), it was colder and then it was warmer before 33.9 and warmer (briefly) after 28, so technically, that is a depression, but it's still very poorly explained.

Volcanic eruptions initially make the Earth colder due to ash blocking sunlight, but in the long run, very rare, super volcanic eruptions can cover parts of the Earth and glaciers with ash, darkening it and leading to less energy lost by reflection and leading to glacial melt. The blocked sun can kill plants as well, and if the volcano is large enough, it release significant amounts of CO2 as well, which, after the initial significant cooling (as the Ash in the air is quite temporary), very large volcanoes can trigger a longer lasting warming period due to increased CO2. It's reasonable and certainly possible that a sufficiently large volcano could do that, and that's what the paragraph seems to be implying.

What this seems to be is a very poorly constructed combination of various studies, one study appears to be a 7 million year stepwise reconstruction of climate, between 25.5 and 32.5 mya. That study may be excellent, but the writer of the wikipedia article was too lazy to bridge the open spaces between various research reports into a coherant series of paragraphs.

In defense of the Wikipedia writer, pretty much every statement is followed by a reference, so if you read the references, it probably makes a lot more sense. It's just very poorly constructed as a paragraph read on it's own, which is how nearly everybody who checks the page will read it.

16
Why is the inside of the Earth so hot?
10
How was the Marinoan Glaciation triggered?
23
What was the Amazon like during Green Sahara?
8
How global was the Bonarelli Oceanic Anoxic Event?
2
How Warm Was the Paleocene?
3
How much of the Earth's heat is caused by the hot centre?
2
Where is the hot air for Australia's record spring heatwave coming from?
6
Geological evidence about climate change: has there ever been a period with a rate of climate change as great as it is today?
40
How it's possible to measure temperature 2000 years ago with such precision?
1
How much of the Earth's surface was covered with water during the Mesozoic?