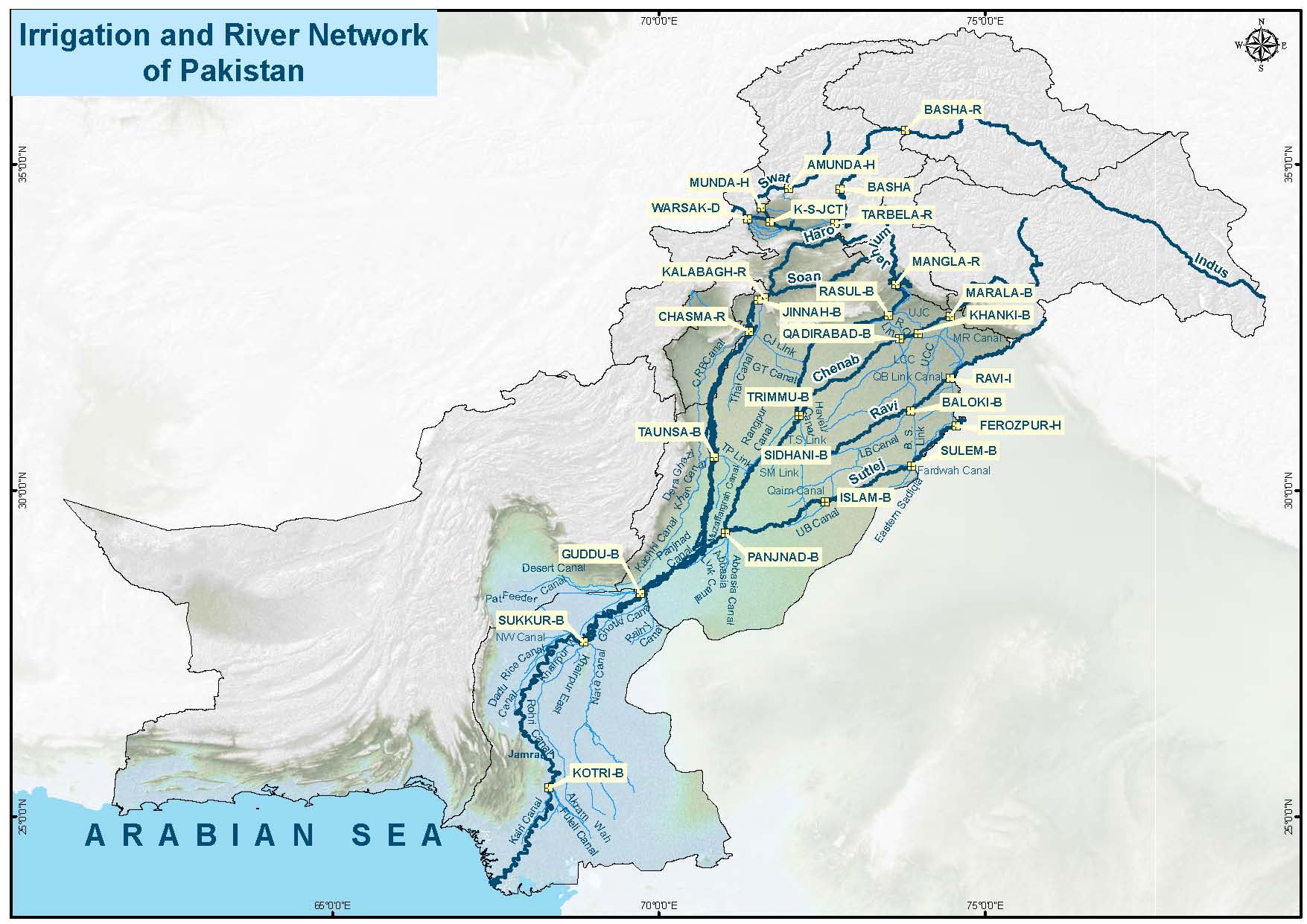 Why do Rivers flowing into Pakistan come from either Afghanistan or India and not from inland mountains?

Is it possible for Pakistan to source fresh water from its northern mountains avoiding India or Afghanistan so that the water can feed the entire nation?

I'm a bit confused why you say the water particularly comes from Afghanistan and India.
Perhaps the colors on that graphic end up being a bit confusing...

As your own graphic does indicate, the Indus basin basically runs the spline of Pakistan. One could argue many many other countries aren't nearly as lucky, with rivers quickly cutting across their country, and so are under much more dependence on countries upstream (and owe more responsibility to countries downstream) (a random example).

Almost all of the water from the northern Pakistani mountains does flow down into central and southern Pakistan and to the Indian Ocean.

Perhaps this fact will be more apparent if the outlines of all the major waterways flowing eventually down into the Indus are shown (from RiversNetwork.org): 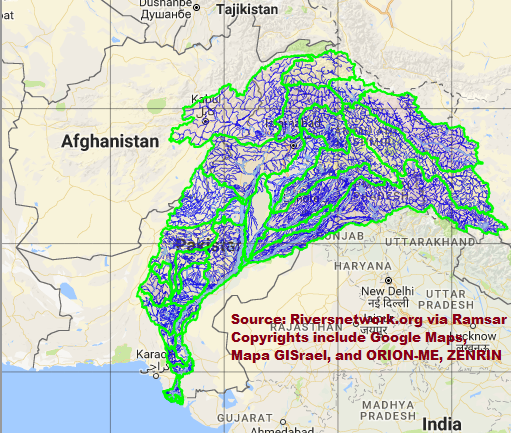 All that area of blue waterways is flowing into the Indus, and down through the country. These rivers include large gatherings into the Chenab, Sutlej, Zaskar, Nubra, and Shyok, all of which spill into the Indus. Yes it does include some parts of northern India/Kashmir and eastern Afghanistan. But note how it also covers almost all of the land in northern Pakistan.

For good measure, this second image, put together from the wealth of tools at worldmap.harvard.edu, hints that most water in SE Pakistan also flows into the Indus (the red outline is all areas from which water will flow into the Indus) (Why a discrepancy? Only guess is maybe SE Pakistan isn't shown on the other map because there's not major waterways in that area?!?!?): 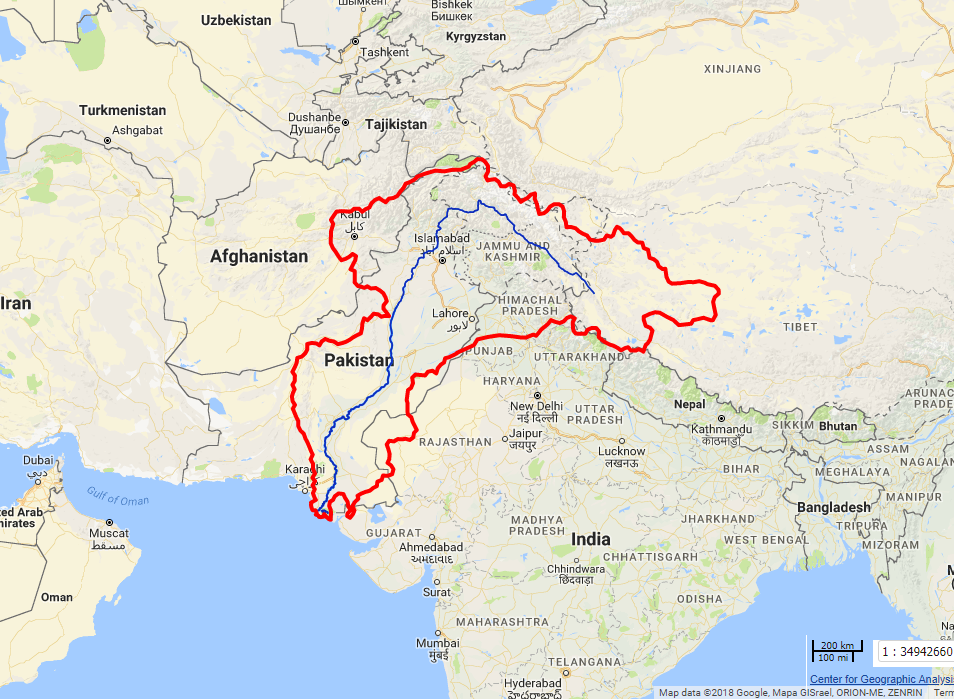 Then when you add in the other independent rivers basins in Pakistan like the Dasht, Nal, and Hub: 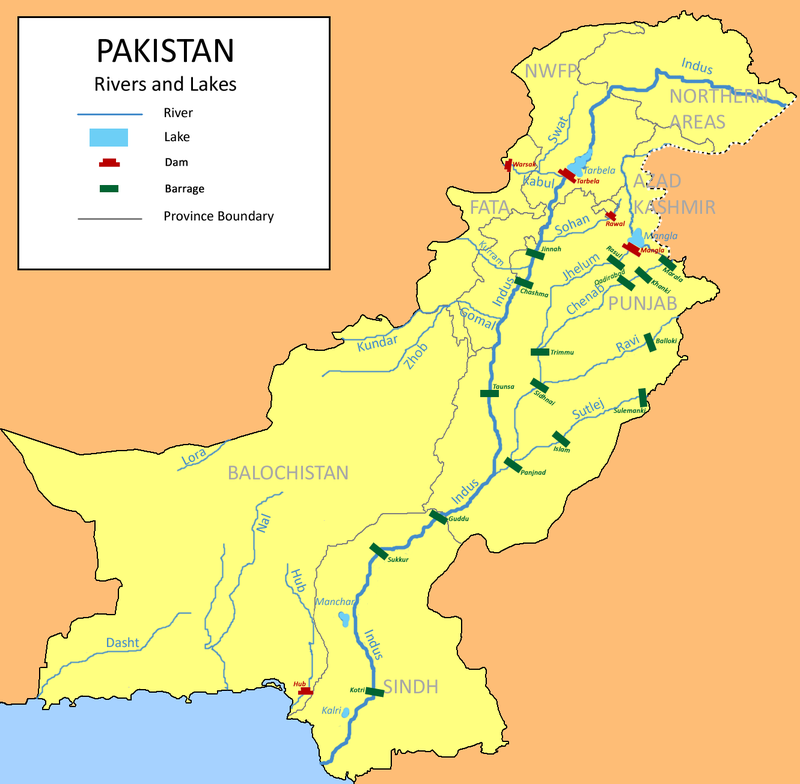 (Source: Rivers of Pakistan on Wikipedia)

you can see most of the rivers/water out west also stay within the country rather than leaving it.

So in the end, almost every drop of rain that falls on Pakistan, from the northern mountains, to the deserts, to the heartland, to the Iranian border, all of it already flows further on into Pakistan for use. In the end, there's only a few tiny slivers of land in the country where water falling on the country is lost by flow to other countries (such as places like near Chaman).

What may be confusing about the image you gave is the gray colors up in the north, nearer the Basha [as well as in southwestern Pakistan]. But those colors aren't showing that water there isn't coming into Pakistan, but only that that area isn't irrigated land. Basically all the water in those gray areas, like the Pakistani portions of the Hindu-Kush/Himalayas/Karakoam Mountains, flows down into the Indus and through Pakistan. Plus even more additional water from neighboring countries. So in other words Pakistan gets more water than what falls on it. Other countries definitely aren't so lucky. And that water is already coming down into the rest of the country.

In terms of feeding the country, irrigation could maybe be expanded a bit... but I believe the problem isn't just the lack of water... but that a lot of the rest of the soil is fairly poor for growing. The book Pakistan's Soil Resources (available online) classifies more than 1/4 of the country's soil potential as "Agriculturally unproductive or non-agricultural land" due to wind erosion, salinity, extremely low, etc.
(Some additional land might be made arable by leeching down salt levels, but I believe it would take long periods of time and great amounts of water. Soil Quality and Agricultural Sustainability, by Rattan Lal, (Google Books preview) looks to include some interesting description of the greater complexities and some longterm potentials of many areas of the world, including Pakistan.)

On the other hand, it sounds like the more urgent concern maybe isn't eating but drinking? (disappointingly, I think you'll find that most other parts of the world probably aren't very aware of your problem... I certainly wasn't). Unfortunately this problem trend is showing up in many other places, such as well-publicized recent issues in southwestern South Africa.

In the end, the primary problem for much of Pakistan's population likely doesn't stem from the complete lack of water... but instead from the lack of needed infrastructure, pollution issues, and mismanagement, as this article alludes to. These are issues that the entire world does struggle with (such as the troubles in Flint in the USA). There are already some parts of the world there are literally growing concerns of not enough water existing in entire regions to sustain it whatsoever (such as in the SW US/impacting NW Mexico) But if the Indus is flowing steadily down to the ocean through your country (please do indicate if its not, the problem may be more serious then!!), it's not a matter of no water, it's the challenge of detouring enough to areas to meet needs, and keeping it clean.

Karachi does look a bit of a challenge area on a map. The good news is it's only 60 miles from the Indus. Quite a few places source their water from such a distance - some places even do get it from hundreds of miles away, even from the far side of mountain ranges as you kind of suggested. But the unique challenge is likely how flat the land is in the south nearer Karachi. Places like California and Rome can take advantage of elevation to better feed the distant water via gravity. Karachi on the other hand may require much more pumping to get the water from the Indus, and that might well not be cheap/easy over even distances like 50 miles?

(As noted, It looks like most of the N Pakistani mountains are south of the continental divide, so almost all their water flows your way already. The few miles of snowpack flowing into Tajikistan and such a) may well be needed by their people and b) could be diverted into the Indus with some effort... but that won't solve problems if the Indus is already steadily flowing. The Suleiman Range might offer some options to divert a little more water west of the Indus using tunnels like in the LA Aqueduct... but that would depend a great deal on the specifics of the topography and precipitation levels in those mountains for feasibility.)

So, indeed, all that water from your mountains is indeed flowing right through the heart of Pakistan, "right by your window" almost (plus the gift of extra input from areas of far northern India). It's just getting it from the Indus to where it's needed. And it just needs to be taken care of carefully.

In the end, Pakistan actually has it a lot better water-wise than much of the Arab world. Find the green:

(image from NASA MODIS satellite)
That spline is the blessing that led to the growth of your country... and its the great challenge of the country today.

In response to the question and answer added, i appreciate the the comments that the water drops in Pakistan stays in Pakistan "very strong word" and like that. I will add short answer, if you can track the major rivers of Pakistan, India and Bangladesh, also Yangtze river (Changjiang river) in China, They all mostly originated from Tibetan Plateau (TP), located in southwestern China. This region is called roof of the earth (We can also call it Water Tank of South Asia) with elevated surface and snow cover peaks. TP is source of these major rivers that include all rivers in Pakistan, India and Bangladesh. These rivers in case of Pakistan passes through different regions and make its way to Arabian sea. To serve the inland needs, The British built very sophisticated irrigation system across Pakistan that also includes the Upper and Lower Swat Canal system. I think for further details it will be better to go through the following link to see rainfed and irrigated regions, Irrigated and Rainfed regions. Apart from that please refer to recent studies about TP for further details.

14
What are the impacts of sublimation on an annual mountain snowpack?
31
Is it possible for rivers to freeze completely and stop flowing?
3
What is the source of the Big Sur river?
11
What is the temperature of the flowing water in icy river?
7
How do rivers last so long in dry weather?
4
Classification of rivers according to width
11
Rocks sparking under water
1
Would the Climate change in Southern Africa by Filling Lake Makgadikgadi Evaporation Pans with water from the Zambezi and Chobe Rivers?
2
MIKE-SHE hydrological model: How to export SZ flow from a larger model to import into a smaller, nested model to inform SZ boundary conditions