How did New Zealand's continental crust get split between two plates?

In New Zealand today, the Alpine fault features two pieces of continental crust sliding past each other, with the whole Eastern side of the South Island falling on the Pacific plate.

But when New Zealand separated from Gondwanaland, it was entirely on it's own plate with the Pacific plate subducting beneath it.

How did most of the south island end up colliding with the very plate it used to be travelling with?

Something similar has/is happening in North America the san andreas fault is caused by part of the north american continent running over the old east pacific (farallon) plate and spreading center, so now the portion attached to the north american plate is being dragged in one direction and peice sitting on/in the (west) pacific plate is moving in a different one. it is slowly pulling the continent apart and eventually may create an island like new zealand.

Here is more in depth discussion of strike-slip/transcurrent plate boundaries. 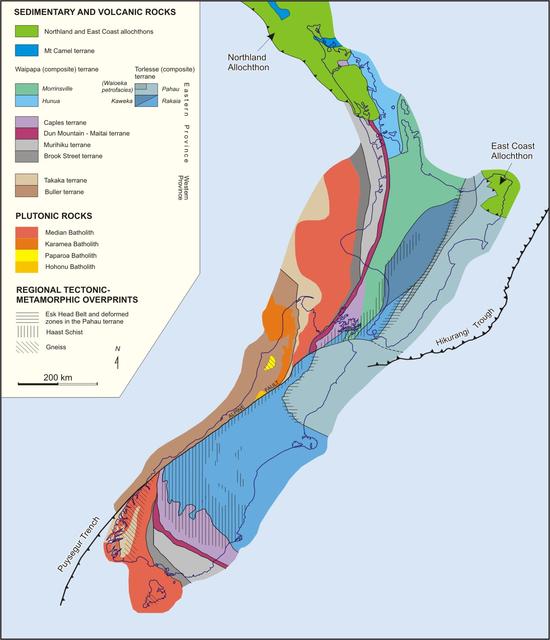 *small pieces can get dragged down but not much.

21
What caused the bend in the Emperor/Hawaii chain of islands, 45 million years ago?
14
What tectonic mechanisms cause the North and South Islands of New Zealand to be so geologically different?
9
What tectonic structures delineate the split between the Australian and Indian tectonic plates?
19
Why does sea level correspond to boundary between oceanic and continental crust?
6
What was the likely composition of Earth's early crust (how did crustal composition evolve)?
2
How is dense magma able to rise and punch through continental crust?
4
What formations are to be expected to develop between the transform boundaries of oceanic and continental plates?
6
How can linear oceanic ridges (like the East Pacific Rise) be explained by single point mantle plumes?