Causes of fluctuations in atmospheric oxygen in past 300 Mya

I have two questions based on the history of atmospheric oxygen levels depicted below. 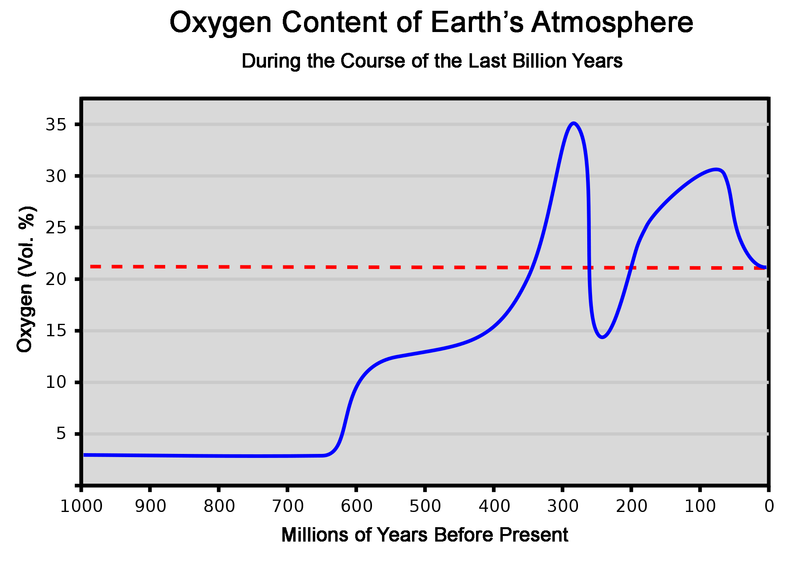 The notes below the chart explain most of the changes in the past Gya. 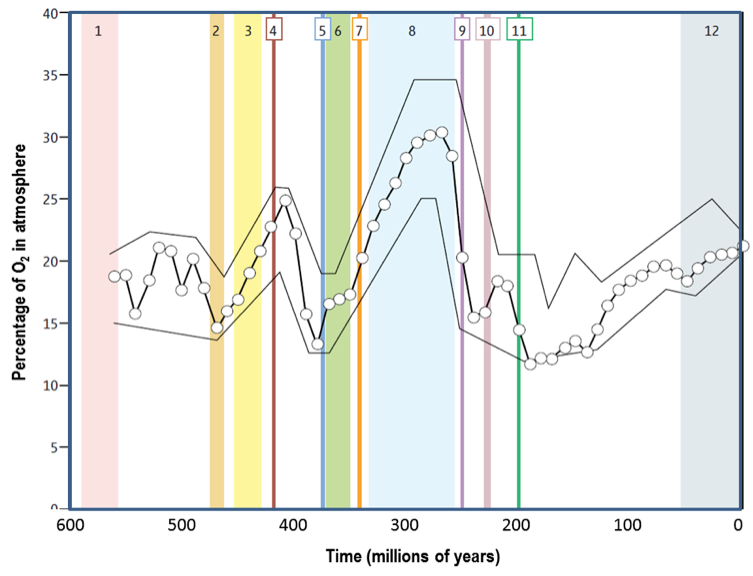 The graph shows three marked drops in O2 levels, each corresponding to an extinction event. These are intervals 4, 9, and 11. Interval 9, the largest such drop, represents the end Permian event about 252 million years ago. Interval 11 corresponds to the end Triassic event, 201 million years ago. The unsourced wikipedia graph linked in the question has at most a superficial resemblance to this sourced graph.

Now for your two questions.

What they don't explain, however, is why oxygen has declined for the last ~100 Mya. For example, is this explicable in terms of volcanism?

I would take even the sourced graph that I used with a grain of salt. That unsourced wikipedia graph: A very large block of salt is needed.

They do explain the Permian decline in terms of volcanic activity, but why do volcanoes affect oxygen levels?

It is very widely conjectured that the end Permian extinction event was caused by the Siberian Traps. This extreme volcanism may have triggered coal fires, thereby reducing oxygen levels. This remains conjecture.

What isn't conjecture is that the end Permian event killed off almost all life extant at that time, including much of the algae and plants that produce oxygen. Without a continuous supply of new oxygen, oxygen sinks such as unweathered rock will inevitably result in a decline in oxygen levels. 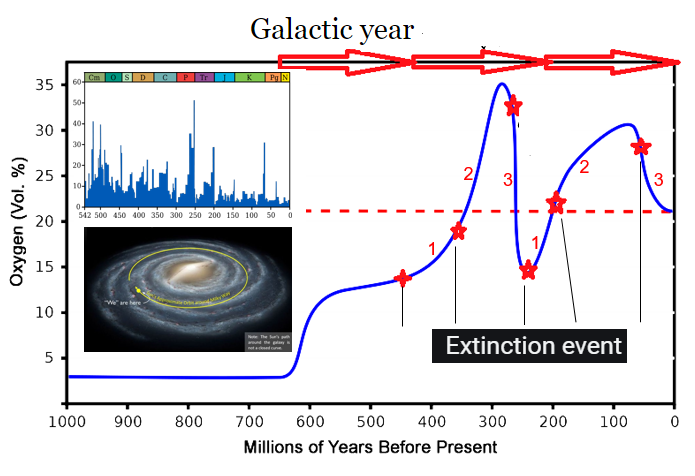 Depending on the concentration of oxygen in the atmosphere and changes in life on Earth, each galactic year can be divided into almost regular "three seasons" each year, with oxygen increasing at different slopes in the first and second seasons and decreasing in the third.

As the Sun orbits the Milky Way, it enters and exits the galactic arms at some specific times, which may be the "probable" cause of these near-regular events of massive extinctions and changes in the concentration of atmospheric gases on Earth in each galactic year, due to significant increase in flux of incoming cosmic rays.

There are some main arms of milky way galaxy that sun goes through as travels around the center of the galaxy. When earth enters a galaxy arm, the constant heavy rain of cosmic rays (high-powered) hit our planet's atmosphere at nearly the speed of light. The very high energy cosmic rays break the strands of DNA molecules, damage genes and kill cells (resulting in cell mutations, death and extinction).

The cosmic rays also shatter air molecules high in our atmosphere, collide with atoms and molecules (mainly oxygen and nitrogen) or even split the molecules, and send atomic and subatomic particles showering down on Earth, so-called air shower secondary radiation.

The incoming cosmic rays by colliding with nitrogen molecules, the process replaces one of the 7 protons nitrogen contains with an extra neutron. The resulting atom, now containing 6 protons and 8 neutrons, is one of carbon 14. As result, nitrogen in the atmosphere changes to Carbon-14 by cosmic rays.The generated Carbon-14 (radioactive) then reacts with oxygen in the atmosphere and forms CO2 (as result of this process also, concentration of oxygen is reduced). The CO2 from Carbon-14 is then absorbed by the plants.

In addition, earth temperature may have also rised by increased flux of incoming cosmic rays, increasing water evaporation from oceans into atmosphere (air) that results in higher number of water molecules being spilt by the cosmic rays.

All these events changed the atmospheric gases concentration and life conditions on earth during traveling of sun into each arm of the galaxy.

However, future research will provide a more accurate answer to this question.

9
When did wildfires start to occur on earth?
19
Why does Earth have abundant oxygen in the atmosphere?
2
Permian-Triassic mass extinction. Consequences on Earth's system

11
What caused a fall in atmospheric oxygen about 1.9 billion years ago?
16
Can impact events cause widespread volcanic activity on the other side of the planet?
8
What causes the entrainment of atmospheric gases towards a volcanic ash/tephra plume?
4
Difference between the oxygen/$CO_2$ ratio during the period of the dinosaurs and the present
8
Is oxygen spread equally on Earth's surface?
5
Why did the carboniferous period have so much atmospheric oxygen?
2
How many mole of oxygen gas is there in the atmosphere?