Does nitrate take a particular long time to percolate from surface into groundwater?

In a recent discussion with a farmer, the (at least in northwestern Germany) "popular" topic of nitrate infiltration into groundwater came up. The general view is that lots of fields receive more nitrate fertilizer than the plants can use, this then percolates through the ground and eventually shows up in the groundwater that is also used as drinking water. So far so plausible. Raised nitrate content in groundwater is indeed often observed.

One should probably add that in this area, a lot of agriculture is raising of hogs and cattle, consequently much of the fertilizer is manure that has a (compared to commercial fertilizer) low NPK content and is thus not worth to transport over far distances. So there's an incentive to dispose on ones own fields, nearby.

Now, this farmer claimed that the nitrate content we see now is decades old, that the bylaws and controls as well as agricultural practices in place now work. Is this true? Does nitrate penetrate ground so slowly? The only mechanism here I could think of that nitrate is adsorbed and desorbed on minerals in the ground, sort of like in chromotography column.

If neccessary, I can provide more figures for nitrate content of specific wells, groundwater table etc - but I don't think it's neccessary since I want a qualitative answer wether or not such a slow infiltration is plausible at all.

hydrology groundwater
Share
Improve this question
asked May 23 '18 at 14:03

I know in New Zealand we have a number of soils you can't raise dairy herds on because the nitrate in their urine strips too many nutrients too fast, to the point where one can tell where the cow urinated a couple of weeks ago because that patch of grass is dying from several different deficiencies simultaneously. My understanding is that dairy cows are, hands-down, the worst farm animal for this because they stand still when voiding and dump up to 15 litres of moderate-high nitrate liquid waste at a time which all goes effective straight down through the soil column robbing it of nutrients along the way. On the other hand there are also some soils, generally in more arid areas, where nitrate doesn't migrate right through the soil column at all but concentrates in the subsoil as a visible, white, salty, horizon.

As a rule the more water retentive the soil the longer water soluble compounds like nitrate will take to work down into the ground at a given water input. There are also some chemical interactions that will bind nitrate and slow it down more than you might expect we need study them in my soil fertility papers but I can't think what they are right now.

But to answer your question, usually soluble soil ions (which nitrate is) move on a timescale of days, weeks or maybe months, but not decades. We wouldn't need to apply slow-release nitrate fertilisers annually if it didn't migrate through at least the top-soil relatively rapidly.

The situation with fertilizer and urine is much more complicated, however, because there are multiple nitrogen species and transformations that occur in the nitrogen cycle. Nitrogen fertilizer may be applied in a number of forms including urea, ammonia, nitrate, or mixtures of these. Urea is commonly used in my area, anyway, because of its low cost.

Urea is converted to ammonium in the soil. Urea and ammonium are cations and strongly sorbed to soil particles. Ammonium can be volatilized and lost as gaseous ammonia but is also transformed to nitrate by nitrification.

Nitrate is the main form of nitrogen that is assimilated by plants. It can also be transformed to nitrogen gas by denitrifying bactera. Some plants such as pulses (e.g. peas and beans) have a symbiotic relationship with bacteria in their root nodules that fix nitrogen in soil gas to ammonium, which is then used converted to nitrate by nitrification and used by the plants. Nitrogen is also released to soil by decomposing plant matter. 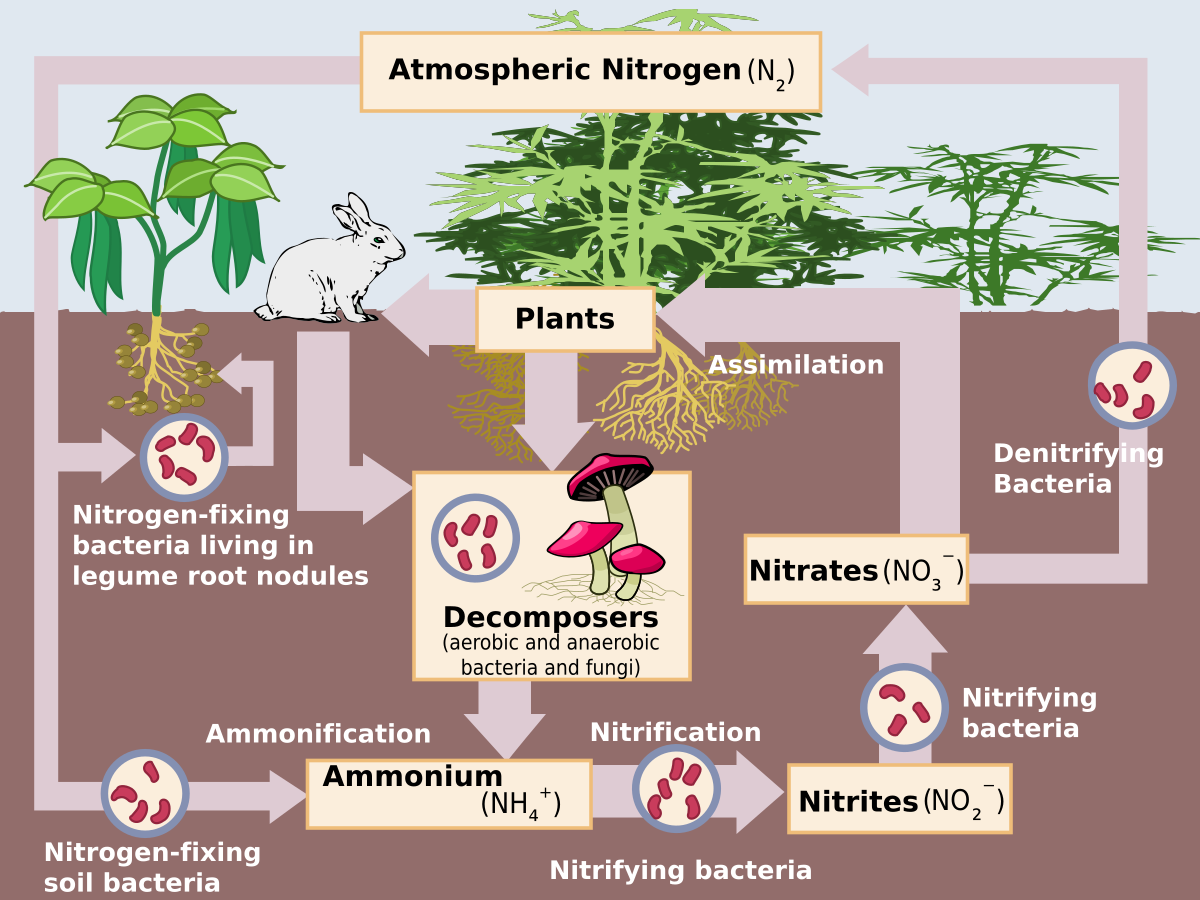 There are other nitrogen species, but they tend to be transient products along the chain of reactions described above.

So the farmer is partially correct, much of the nitrogen in the soil is in a form that is not readily available for uptake by plants or by leaching to groundwater. But is incorrect to say that current impacts are only due to old nitrogen and that the problem has been solved. As long as nitrogen is being added in one of the various forms, the transformations are ongoing, nitrate is being produced, and this nitrate has the potential to pollute groundwater. Note, also that ammonium and nitrate can be transported through surface water, either sorbed to sediments or dissolved, which can be an even bigger pollution issue.

Here is a link to a video on nitrogen transformations in agricultural soils and to notes on the video, for those that prefer to read.

Not the answer you're looking for? Browse other questions tagged hydrology groundwater or ask your own question.

10
Is there any link between sea-water inflitration into groundwater and nitrate?
3
How long does it take to refresh the entire water supply in the Earth's atmosphere?