Does the Columbia Basin, North Cascades and Idaho Panhandle/Clearwater get a lot of violent, rotating supercellular thunderstorms?

However, I'm asking about severe weather in the region directly wedged in between the two aforementioned regions; all of WA east of the Cascades (East Slopes, Yakima Valley, Palouse, etc. This includes the southern Okanagan and the Kootenays in B.C.), and northern Idaho. Spokane/Coeur d'Alene, Pullman/Moscow, Lewiston, Wenatchee, Kelowna, Penticton, etc. Maybe even down to Boise.

Is this an area that can have favorable conditions for rotating supercell storms (the kinds that can spawn significant tornadoes or drop monster hail), like in neighboring Montana, Wyoming, or the Deschutes Basin in central Oregon?

Such a region is on the leeside of the Cascades (which means capping inversions), and right in the firing line of monsoonal plumes from the Four Corners states, so to me it seems logical that (at least on paper) the northern reaches of the Inland Northwest can support supercellular development.

Addendum: I was asked to source my "Deschutes gets monster hail and significant tornadoes" statement. For hail: if you look at the SPC storm reports for May 4, 2017, you'll see that 1.75-2" hail was recorded in Bend, as well as the towns of Sisters OR and Madras OR, around 10:30-11:00 p.m. PDT (0530-0600Z) on the 4th. For the Pacific Northwest excluding Idaho, I'd say those are some pretty darned big hailstones, and qualify as "monster hail" in a relative sense. Supercelluar thunderstorms are also not unheard of in this area, like the July 9, 1995 supercell in Redmond OR. As for tornadoes, I was wrong. I checked the Tornado History Project map, and it looks like most tornadoes to hit the Beaver State are west of the Oregon Cascades.

Note: These inputs are of a meteorologist who has quite actively tracked severe weather around the US for a couple decades... but also hadn't spent as much time in or attention on the west and northwest of the country. So there could could theoretically be some degree of unintended bias. I've tried to use objective data where possible, but it's something to keep in mind, regardless.

In terms of "a lot", at least for tornadoes/hail, I'd suggest that nowhere west of the Rockies sees a lot truly: 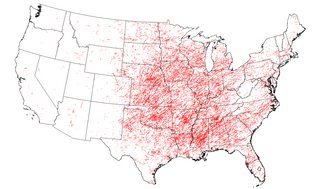 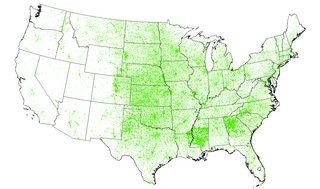 I'd offer the idea that there of perhaps two notable reasons for that:

The lack of rich low-level moisture is due in large part to the lack of accessibility from warmer moisture sources, particularly the Gulf of Mexico; the Rockies provide a barrier to much of the moisture reaching further west.

As you note, parts of Wyoming and Montana do see supercells and tornadoes a bit more often... but on a good topographic map, fair parts of those states are east of the Continental Divide, and so still on an "upsloping" area and thereby not blocked by sinking regions which prevent full moisture progress. They're still less-tornado prone due to elevation and increased distance from moisture, but it does happen.

The desert southwest also does manage to get monsoon moisture sneaking around the terrain further south... but further north that monsoon moisture sees additional blocking by the more elevated terrain across Nevada and Utah. (And in the southwest, a different key ingredient in tornadic supercell development is typically missing in the summer monsoon: upper-air winds sufficient for supercell development)

The Pacific Coast does see a few occasional tornadoes. But from what I've seen, they typically form from smaller storms with much less classical and intense mesocyclones. As you mention, they're a bit more in line with cold-core setups, which usually produce weaker short-lived tornadoes than classic supercells of the Plains and on east. If you plug in the events you speak of into SPCs Severe Weather Events archive, [pick the date, then click Obs and Mesoanalysis on the left, then use the dropdowns to find various parameters] you can see that CAPE was typically very meager (well short of 1000 J/kg) and the storm structure quite weak in reflectivity in comparison to a classic supercell, more indicative of such cold-core setups.

Capping inversions may be helpful to "keep the lid on the pot" if you have strong CAPE (and therefore quality moisture) and intense updrafts to erode the cap during the day. But as it is, there isn't enough moisture typically for the cap to be a positive factor.

Quite a bit of the area you mentioned, such as Spokane, makes up one of the more arid regions of the country. Further removed from the rain shadow of the Cascades, the Idaho Panhandle does get more precipitation, but it's mostly in cooler months that lack the deep convective development needed for supercells, probably because of the proximity of the Pacific high in summer months. Further east in E ID/W MT, particularly in the Flathead Valley, there are occasional summer thunderstorms... but the storms may well be higher based due to the limited low-level moisture, and so have low potential of tornadic development. For more on the climate complexities at play in the Idaho vicinity, check out this article from the Western Regional Climate Center.

In the end, the area you ask about is one of the weakest regions for supercell development in the entire United States. The entire quarter of the country west of the Rockies isn't much better. This page from Iowa State University will create an image showing the number of days since each pocket of the country (sorted by National Weather Service forecast office areas) last saw a tornado warning. It shows that the Idaho Panhandle hasn't seen a tornado warning in over 10 years: 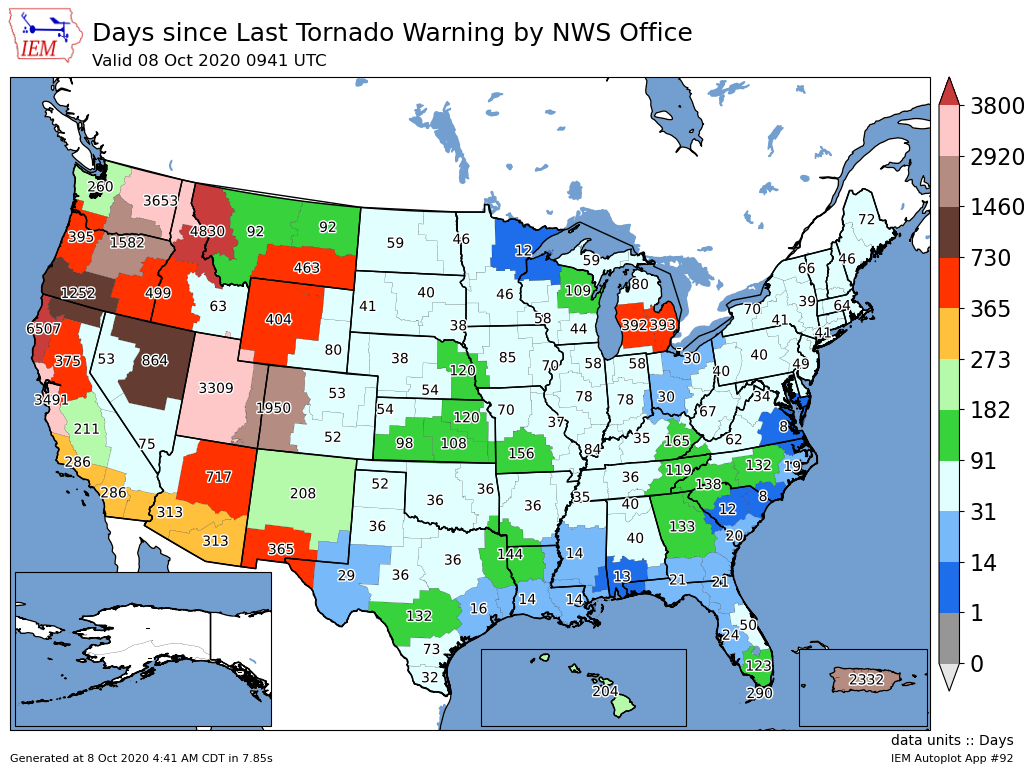 More than anywhere but northern California.

And another ISU page allows it to be shown that: 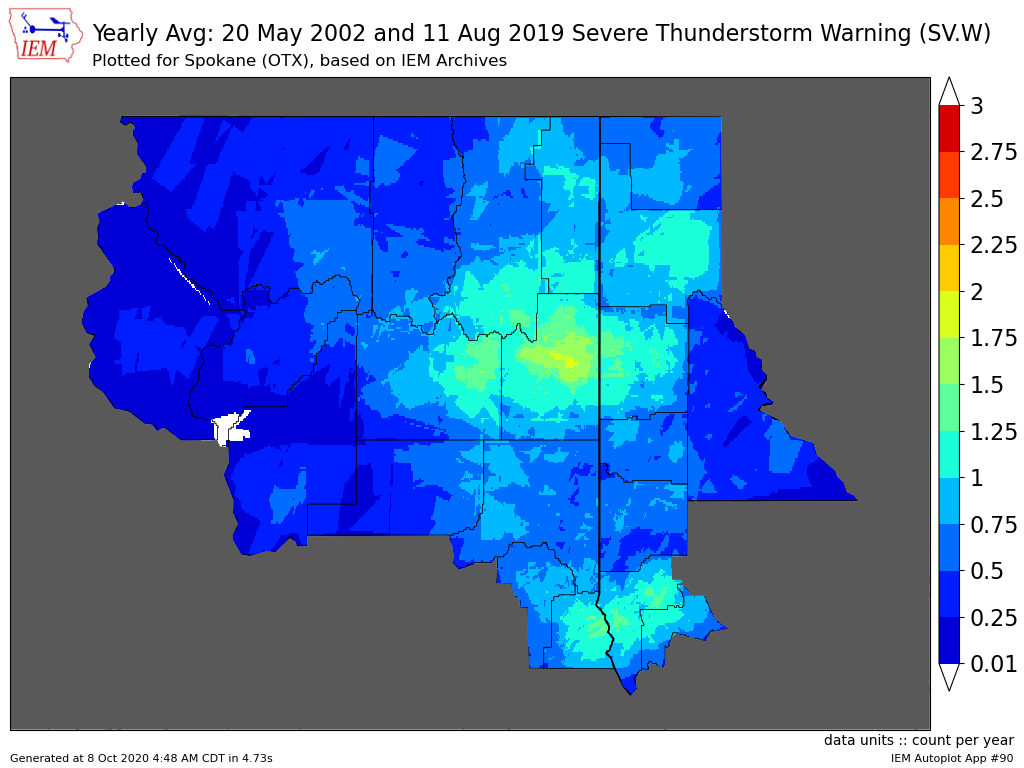 ... Most spots in northern Idaho only see about one severe thunderstorm warning per year on average (versus 10-20 per year over Oklahoma).

So the danger of severe convective weather is remarkably low in that region of the country overall.

8
How does the amount of mass in an atmosphere affect the seasonal changes and dynamics of the planet's climate?
3
If North America were in the southern hemisphere, would the mountains and high desert have to be -east- of Tornado Alley?
2
With respect to latitude and time of year, what geopotential heights are associated with low pressure systems on the North American landmass?
10
Does the global temperature vary daily (hotter and colder days)?
1
Why does the annual temperature range get bigger where latitude is higher?