Why do clouds have ceilings and bases?

What is the point called when water can not rise above or visually seem to have a ceiling in the atmosphere? What makes that point ideal? 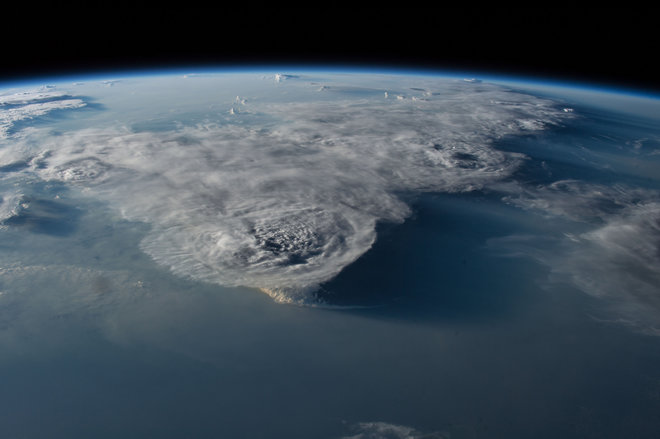 In a sense, the full structure of a cumulus cloud extends all the way to the ground. The cloud is formed from the convection of air rising off the ground. The rising column becomes visible as a cloud when the atmospheric temperature becomes cold enough to condense water vapor, and the level where that occurs is the base we see. From Wikipedia:

Cumulus clouds form via atmospheric convection as air warmed by the surface begins to rise. As the air rises, the temperature drops (following the lapse rate), causing the relative humidity (RH) to rise. If convection reaches a certain level the RH reaches one hundred percent, and the "wet-adiabatic" phase begins. At this point a positive feedback ensues: since the RH is above 100%, water vapor condenses, releasing latent heat, warming the air and spurring further convection.

In this phase, water vapor condenses on various nuclei present in the air, forming the cumulus cloud. This creates the characteristic flat-bottomed puffy shape associated with cumulus clouds.[1][2] The height of the cloud (from its bottom to its top) depends on the temperature profile of the atmosphere and the presence of any inversions.[3]

Clouds form under specific conditions of composition, humidity, density, temperature, and pressure. These conditions are often persisted within specific layers in the atmosphere. Complex fluid flow of air is also a contributing factor for layering within the atmosphere between air masses for varying density.

The answer is probably best summed up as the result of the physics of fluid dynamics.

I know this question has an answer confirmed, but I'll add my own comments for posterity's sake. There are different types of clouds. Buoyancy-driven (cumulus-type) clouds are the types that have the most definitive bases and ceilings.

There are other types of clouds with other formation mechanisms. Cirrus clouds, for example, occur when the clouds in the above process go so high that they reach freezing temperatures and are moved into other regions. Stratus clouds form in the above process when the parcel never reaches step 2. Fog may form from either advection or the air diabatically cools to reach saturation. Kelvin-Helmholtz clouds form due to inertial instability. Contrails form from the hot moist exhaust mixing with the cool, relatively dry atmosphere.

Not the answer you're looking for? Browse other questions tagged meteorology geophysics thunderstorm or ask your own question.

14
Are cloudy nights warmer than nights without clouds?
30
At what humidity does it start to rain?
9
How are thermals really released?
1
What percentage of cumulonimbus clouds create lightning?
1
Relationship between pressure, temperature and density in meterology
5
Why did the carboniferous period have so much atmospheric oxygen?
3
Can an igneous rock have a Vp of less than 1000 m/s and need blasting to excavate?
1
Why are temperatures within a few degrees of the all-time high actually pretty common?
3
Why do clouds sometimes form in "plumes"?
8
Why do clouds dissipate when mixing with dry air?