Is volume of air increasing as CO2 levels increase?

CO2 levels are increasing, they have crossed 400 ppm, which means that of every million gas molecules in the air, 400 are of CO2.

It has been increasing. Does that mean the total volume of air in the atmosphere is increasing or that some other gas is decreasing as CO2 increases?

In short the answer is NO.

This planetary comparison suggests that more CO$_2$ will lead to a more massive atmosphere and higher atmospheric pressures, but little change in its actual volume (if you somehow manage to define how to measure the volume of the atmosphere).

Therefore, more gases in the atmosphere will lead to a denser atmosphere, but have little impact on its thickness.

Now we have to make a very important distinction: It is not the same to add CO$_2$ from a CO$_2$ source (like a volcanic eruption) than add it due to combustion of fossil fuels. This is because the latter do not add molecules to the atmosphere, just turn O$_2$ molecules into CO$_2$. Now, if you look into what this transformation means in terms of volume, you will get a surprise (at least it was a surprise to me):

I was surprised at first by this result, but it nicely explain the classic experiment where a boiled egg get sucked into a bottle: 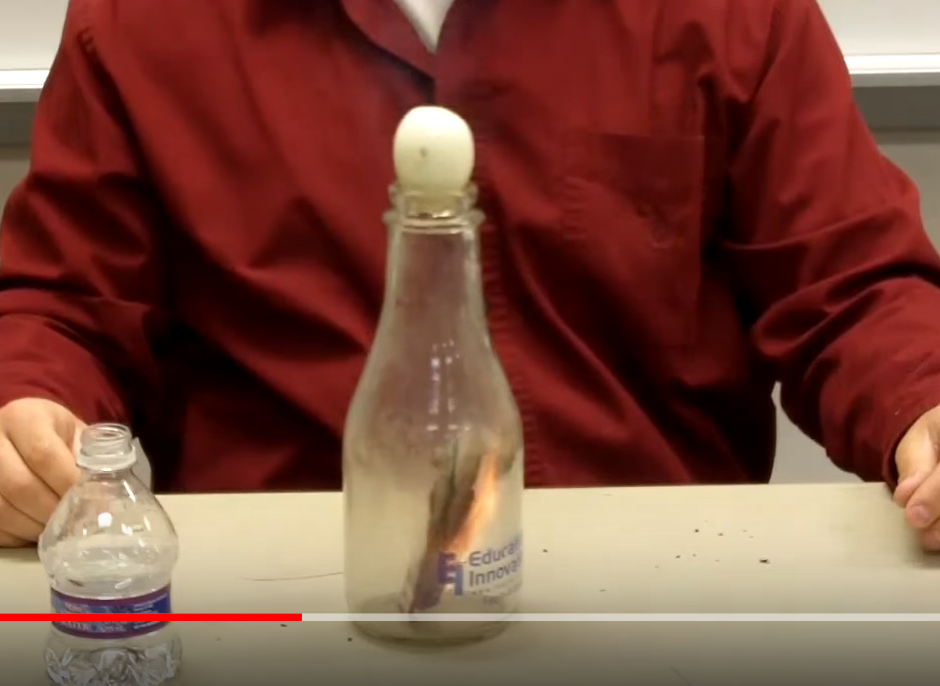 This is an screenshot of this video where you can see the trick in action (skip to minute 1:10)

Now, despite that burning stuff decrease the volume of the atmosphere. It is important to note that if you add greenhouse gases like CO$_2$ or methane, you are not only increasing the amount of those gases in the atmosphere, because the increase in temperature will lead to an increase in water vapor too. So the atmospheric mass increase will be larger than the mass of CO$_2$ or methane added. And that extra mass is related to additional molecules, so it will lead to extra volume (contrary to the combustion case where the amount of molecules is constant).

Thus, as we burn fossil fuels the mass of the atmosphere increases (as well as the atmospheric pressure), but the volume decreases, and due to the fact that CO$_2$ is the product of combustion, that increase will be at the expense of reducing the amount of molecular oxygen (O$_2$).

Although, this decrease is very small: the atmosphere have ~21% of Oxygen and 0.04% of CO$_2$, so an increase in CO$_2$ of a 30% (similar to going from 300 to 400 ppm), means a reduction of O$_2$ of 0.01%, a relatively small change (using Wikipedia numbers it would go from 20.946% Oxygen to 20.934%). Also, that's strictly true only if you make an instantaneous combustion. Because over time there could be negative feedback working against this imbalance. For instance, plants will increase the rate of photosynthesis (CO$_2$ fertilization effect)

That said, the mass increase (and volume decrease) associated to the CO$_2$ jumping from 300 ppm (pre-industrial levels) to 400 ppm is negligible, and probably dwarfed by day to day changes in particulate material or water vapor.

As a side note, the book "Red Mars", makes a fairly scientifically sound description of how to "terraform" Mars, and how adding CO$_2$, or water vapor increase the atmospheric pressure and surface temperature.

Volume of gas is determined by ideal-gas law which states that PV = nRT where P is pressure, V is volume, n is amount of gas, R is a constant and T is temperature. If P and T remain same then adding more gas (increasing n) would result in change in V (volume). However, the factors that affect pressure and temperature of air are so highly variable and large that minuscule volume increment expected from amount of CO2 does not matter. However, CO2 by absorbing infrared radiation increases temperature and that results in increase in volume which is a topic of active research.

Not the answer you're looking for? Browse other questions tagged atmosphere climate-change co2 air or ask your own question.

2
How does atmospheric pressure remains constant even though we have released 43 billion tons of $\ce{CO2}$ in one year?

10
Is there any experiment to prove that CO2 with the atmosphere concentration can have greenhouse effect?
4
Do rising CO2 levels change the appearance of the sky in infrared?
0
Formula for rising temperatures
2
CO2 density, is it really a greenhouse gas?
0
Is there any natural phenomenon that can account for the 100 fold faster CO2 rate increase?
1
Does extrapolating current CO2 trends indicate 7632 PPM CO2 and 14C temperature anomaly within 200 years?
4
How far would average sea level rise from a 25% increase in total ocean volume?
4
Wouldn't 'fertilizing' the ocean to increase cyanobacteria, algae and other phytoplankton populations actually INCREASE CO2 levels in the air?