How quickly can coral fossilize?

On a trip to Honduras a few years ago I visited one of the islands off its north coast with a friend and went to a section of it mostly with nothing but residences which looked far less visited by tourists and which had no live coral off the coast in that section of island unlike other parts of it. While in that area we saw what looked like a rocky protrusion a little off from a small beach, about 50 or so yards offshore, so my friend and I waded out to it and we were stunned to discover that it was a rather large exposed section of coral that had been completely fossilized. It was pitted in parts, reminding me a bit of the surface of the moon, but we clearly saw amazing varieties of coral and their fossilized contours and patterns in the "rock".

But more puzzling is that it protruded at its base a good 1-2ft above sea level on average (though erosion made the edges gradually slope down to the water) and up to probably betweeb 5 to 7ft above sea level in some other areas where the coral [or mass it was on] protruded), which made the higher sections clearly higher than the beach we had just waded from. That seemed to indicate that the ocean level may have been quite a bit higher when it was still alive and parts of the island may have been more submerged at some point in the past if I had to guess.

Ignoring for a moment my imprecise measurements and notes about its exposure relative to sea-level, how long would it take any portion of alive and healthy coral to fossilize once exposed directly to the sun outside of/above water at its quickest, turning rock-grey and becoming firm, even if the fossilization process is not completed to its utmost extent? Can it happen in a few thousand years, or does it happen only at a significantly slower rate than that? Has any such process of fossilization actually been observed (as proceeding through its stages) at any point throughout recorded human history, and what would intermediate stages look like in terms of color, firmness, etc.?

I am not an earth scientist so you'll have to go easy on the explanation here.

Edit: I have now uploaded some photos to Flickr of the particular coral I saw. The "mini island" (I'll call it) was quite alien-looking and bizarre in places, also overgrown with some plants on the main mass, but you can, for example, see the close up I took of one fossilized bit of brain coral that was firmly set in the rock. 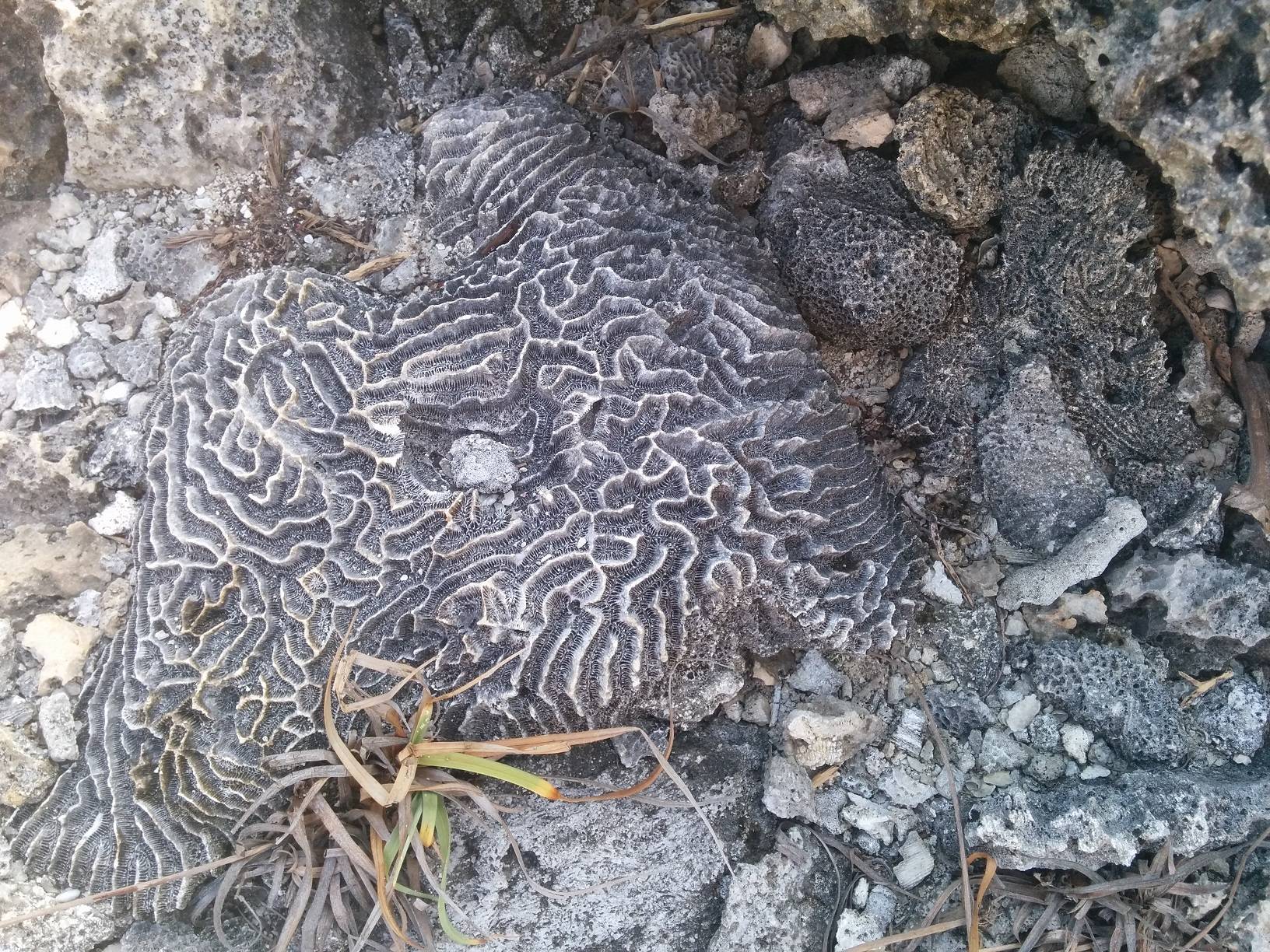 I also found a similar photo on Flicker taken by someone else taken from San Salvador (Bahamas) at what is identified as the Cockburn Town Fossil Reef, and the photo has an interesting scientific essay with citations in the image description.

First thing is that the sea-level wasn't necessarily that high when the reef was growing, Hondurus is on the edge of the Caymen Trough Fault Zone and experiences quite high rates of uplift, (relatively speaking, your fingernails actually grow faster but over long periods it builds up). So the Coral reefs you're seeing high and dry could be quite recent in geological terms and laid down at or close to current sea levels.

Live Coral is a thin skin of either algae or tiny animals called polyps over what is essentially already Limestone. The live coating builds up this Limestone in order to 1. protect itself and 2. gain advantageous position as far as sunlight and nutrient rich currents etc... Once the coral builders die, which can happen within minutes of exposure to the air for some species (for others the water just has to get too warm, or too cold), the "skeleton" is already effectively a fossil and pretty well as hard as it's going to get.

Any reef is largely made of Limestone from dead Corals that have either simply been grown over or have been broken, ground down and then the coral sand concreted together because of biological and/or chemical processes to form bulk Limestone in which most or all of the old coralline structure is invisible. The primary mechanism for removing coral structure is actually fish that crush coral chips into sand or even finer grains while feeding on surface dwelling algae. The hardening of these grains into a homogeneous whole is usually a combination of the action of coralline algae creating lime on the grain surfaces that bridges individual grains together and the chemical precipitation of dissolved minerals, particularly calcium carbonate from the grains themselves, into the lime sand beds due to daily fluctuations in water temperature and the associated calcium carbonate solubility shift. As the temperature of the water drops at night more lime can and is dissolved into the sea, during the day this process is reversed by the rising water temperature. This process is ongoing with coral sourced lime being added to the limestone reef steadily all the time it's growing.

In terms of the grey colouration you've observed a lot of that will be land derived sediment that was incorporated into the reef while it was still growing and is the natural colour I would expect from an exposed reef deposit so close to shore. Some of it may also be surface in nature though and the rate at which that will accumulate will depend on the wind, the amount of dust in the environment and the surface porosity of the exposed deposit. The higher the winds, the dust count, and/or the surface porosity the faster that surface will be discoloured by dust. There might be a little bit of chemical staining from water percolation but that's normally in the form of Iron and is yellow, red, or orange in colour, similar to this image from Spain.

Short version not much has actually happened to the reef deposits you're seeing since they were laid down except that as the land has risen they've been taken along for the ride and are now above sea level.

If I missed anything or wasn't clear somewhere along the line give me a shout in the comments and I'll update accordingly.

Not the answer you're looking for? Browse other questions tagged oceanography fossils biogeochemistry geobiology or ask your own question.

19
Current consensus on the Messinian Salinity Crisis
8
How can I learn to spot fossils and fossil-bearing rocks on the Jurassic coast?
2
Saltwater River Freeze and Thaw
9
Is it true that “All life on earth gets its energy from the sun”? How much biomass is not derived from photosynthesis?
8
How can half a degree of average temperature result in such devastating impact on coral reefs?
2
How much net carbon can coral sequester?
2
How Good is The Evidence For Snowball Earth?
3
Does Earth's rotation cause sea levels to increase from east to west?