If the nitrogen and oxygen in our atmosphere were doubled would the pressure double?

The starting question is phrased as such ...

Density is mass per volume.

You can only add mass to a system in one of two ways. One way is to keep density constant. In this case, volume must increase. Since volume is area times height, either area or height must increase. On the earth, the air on the surface cannot expand itself laterally. Area is constant. Therefore, we learn

—> ANSWER 1: As mass is added to air on the earth under the condition of constant density, the height of the air above the earth will increase.

Another way to add mass is to allow density to change. The intuitive first response is that, when we add mass, we expect density will increase. At the limit, this is the same as keeping volume constant. For this case, we learn

—> ANSWER 2: As mass is added to the air on the earth under the condition where density increases, the limiting case is one where the height of the air above the earth will not change.

Finally, we could argue that we want to allow volume to expand somewhat as mass is added. The result is an answer between the two above.

Note that air is compressible. Its density will change as a function of pressure and temperature. By the ideal gas law, $\rho = M n / V = M p / R T$ where molar mass, moles, volume, pressure, gas law constant, and temperature are used. The overall effect is that density is not a constant for the system of air above the earth.

The surface pressure is just the weight of the atmosphere per unit area, so yes. 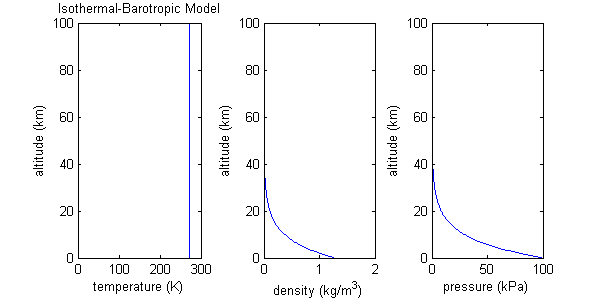