Why do rivers sometimes travel down the opposite side of the mountains from where the rain happens?

My teacher explained that when wind coming from the ocean gets blocked by a mountain it makes rain on one side of the mountain, like in the image below. This rain leads to the creation of rivers. 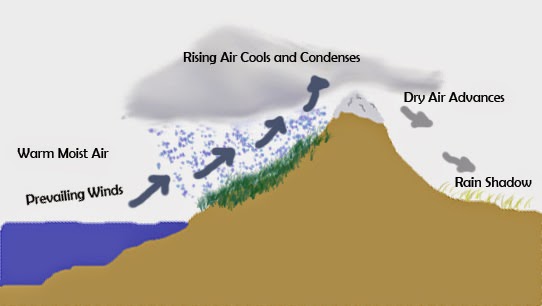 (found on Google Images to be on numerous websites, difficult to determine original source)

One example of this is when monsoon winds coming from the Arabian Sea hit the Indian Western Ghats, it makes rivers which travel to the east instead of traveling to the west.

In that image you have displayed you are assuming a 2D flow i.e. in the x and z direction where is x is the direction along the mountain range which is parallel to the ocean(or sea) and the z is the vertical direction. This is a very simplistic assumption of mountain topography as depending on the context one can have mountain gaps and then the moisture laden winds can assume a 3D flow i.e. in the x,y,z direction( y in this case would be across the mountain). In the specific case you mention namely the Western Ghats there is the famous Palakkad Gap which bring in moisture laden winds from the Arabian Sea into rain shadow area(at least from the perspective of the South West Monsoon) and can fill up the river headwater source on the rain shadow region and these rivers then flow from west to east.

Secondly the atmosphere is a continuously stratified fluid and in the orographic context one needs to consider what is called the Froude number. From a layman's perspective this is a ratio between the inertial forces and gravitational forces that determine the 3D state of the atmosphere. From a perspective of the the atmospheric scientist the inertial forces in this case would be horizontal wind field(monsoonal wind) and the gravitational forces are represented by Brunt Vaisala frequency and is a angular frequency that tells you how air parcels oscillate vertically in a stratified environment.

So assuming the following $$ Fr_n < 1 $$ what this means the incoming wind from the ocean side is not strong enough the penetrate the mountain barrier and you can have what is called upstream blocking. Often during the monsoon the monsoon trough will spend most of it's time offshore and only give skeletal rainfall to the coastal areas.

In the other scenario where the following applies

$$ Fr_n > 1 $$ in this case the wind is strong enough to penetrate the mountain barrier and the capping inversion on the Lee side can be broken in many ways(diurnal sensible heating and latent heating and ample moisture) can cause dark cumulonimbus clouds to form on the Lee side and that would certain fill up the river source on the Lee side as well.

This paper - Houze 2012 Orographic Precipitation is comprehensive and the specific case of the OP will be covered in figure 3e/3f as well as Figure 30(unblocked flow).

I am pretty the real answer is in how well known the waterways are, which distorts perceptions of which side of the mountains really has more flowing.

The rivers on the leeward side of mountains typically go on to travel large distances, and so as they continue, tributary waterways gradually merge, and so such rivers end up having gathered water from huge areas, often therefore being very large and wide further down towards their mouthes.

But the thing is that near the mountains, I believe you'll actually notice that waterways on each side of the ridges are fairly similar... and indeed that that the windward side tends to have if anything more rivers and streams. It's just they simply don't go very far before reaching the ocean... so they aren't able to merge together from large collections into bigger rivers. And thus they also aren't very famous because there are so many of them and they're so short and unremarkable in width that people outside the local area just haven't heard of them.

I couldn't quickly find great map tools or GIS placefiles for India that would allow us to easily turn enhance the view and select layers so we could highlight the waterways details well. But OpenStreetMap at least has water features of many widths and fames included on a map even when zoomed out a fair bit to show the broader balance. So that allowed a sort of quick snapshot, which I took for around southern Karnataka and nearby areas in the south:

I then sketched in the rough boundary of the Western Ghats (in brown) using the great Topographic-map.com and also the rough path of the Kaveri River (which Wikipedia seems to suggest is probably the most well-known river in the region?), as well as some of its sizable tributaries (in blue) within the flatter lands.

But click on it to open the picture full screen and look past those bigger lines I drew on and focus instead on the light blue lines OSM uses to show waterways, I think you'll notice that approaching the mountains, there's plenty of waterways flowing from the western edge of the Ghats to the Arabian Sea. I very much do wish we had a better map source that could color-code rivers by width, and stand them out more amongst the other geographic features. But I hope you'll find this clearly enough shows that the rivers aren't nearly all on the eastern side, it's just that the ones there flow such a long way that by Tiruchirappalli, they have merged into one large river... which all those waterways west of the Ghats never get the opportunity to do. But there's a lot of water flowing down the western sides of the Ghats.

And if you look around the OpenStreetMap display of India at the same zoom, I believe you'll convince yourself this is the same case up and down the west coast.

And that that is also true in many other places, like in Chile/Peru along the Andes (where the mighty Amazon flows east).

More water flows down the near (windward) side of the mountains... the rivers there just aren't able to continue on far enough to become grand rivers and reach fame to be put on the national maps or school quizzes.

Not the answer you're looking for? Browse other questions tagged wind rainfall rain orography or ask your own question.

6
How does temperature impact the elevation distribution of orographic precipitation?

3
By how much can rain temperature vary from the ground-level air temperature?
2
Why does it rain during the sunny day?
4
Why are rain weather predictions (apparently) so unreliable still in the year 2021?