What is this Sun and moon photographic anomaly? 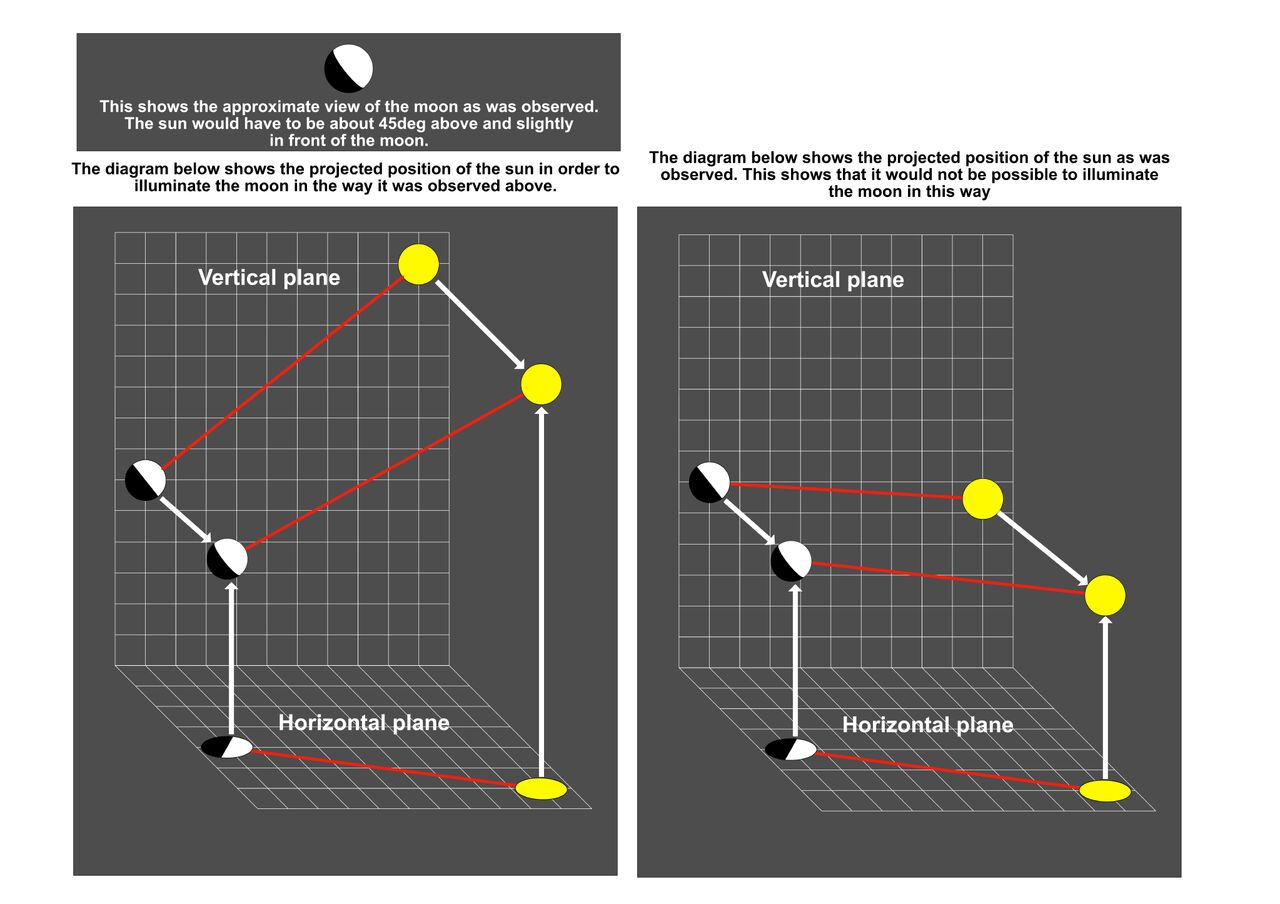 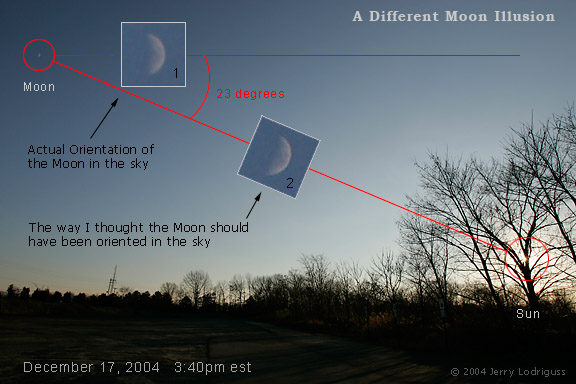 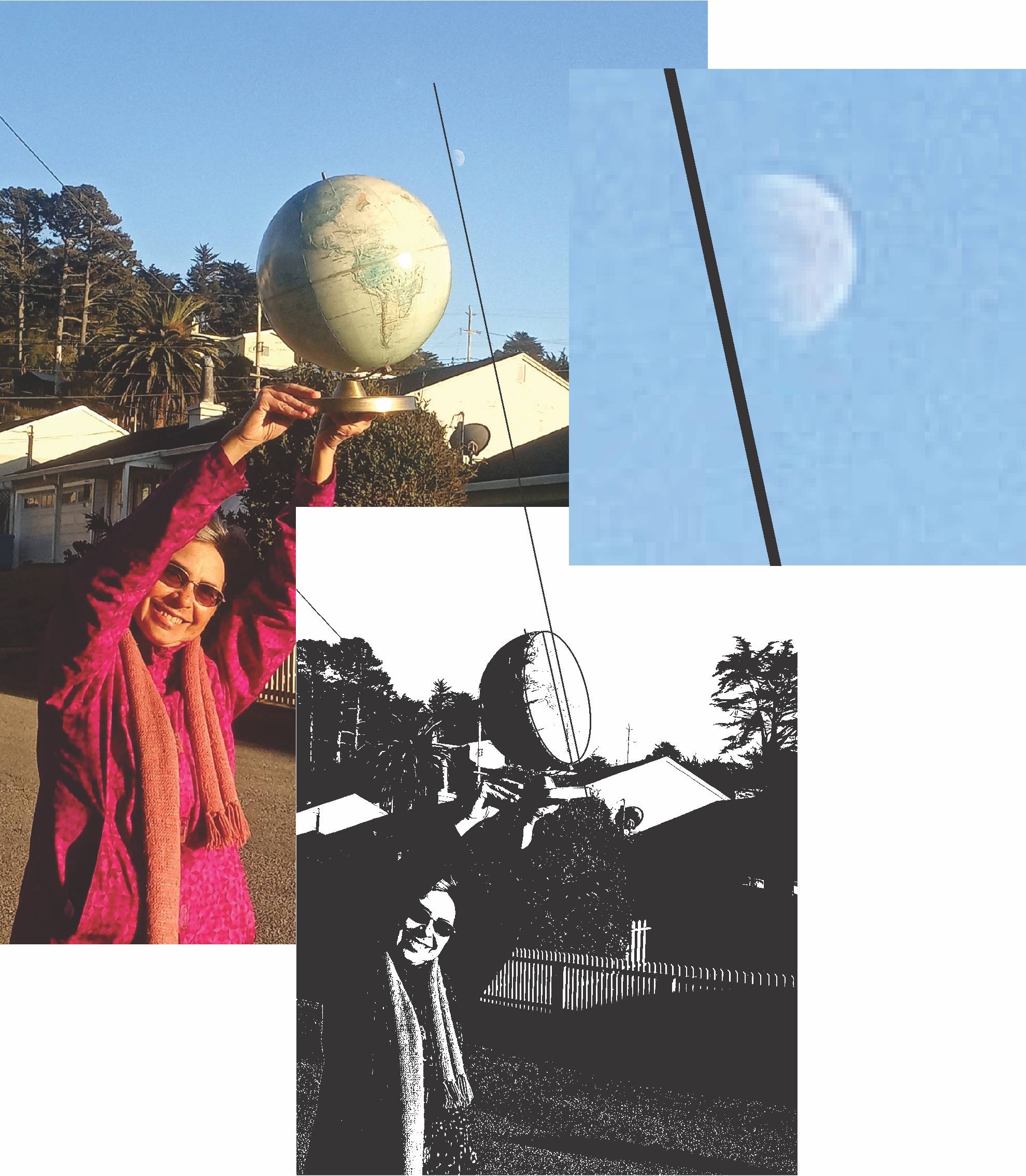 Here my wife holds a globe with the moon in view. I carefully processed in a bit-mode to find the curve of light on the globe and drew perpendicular lines. Plainly we can see that the moon-lite side is facing the sun in the same direction of my globe.

The illusion is due to the sun being so far that the difference in angles shown in the drawing would not be noticeable. Imagine two planes where both of them contain the sun and moon, the level plane would be how an observer would see the moon when both the moon and the sun were at the horizon. The tilted plane is how an observer would normally see the moon high in the sky even though the sun was at the horizon during sunset. The observers on both planes would see the same half-moon shape even though the relative heights in the sky vary greatly. This construct might only work for quarter moon illuminated. 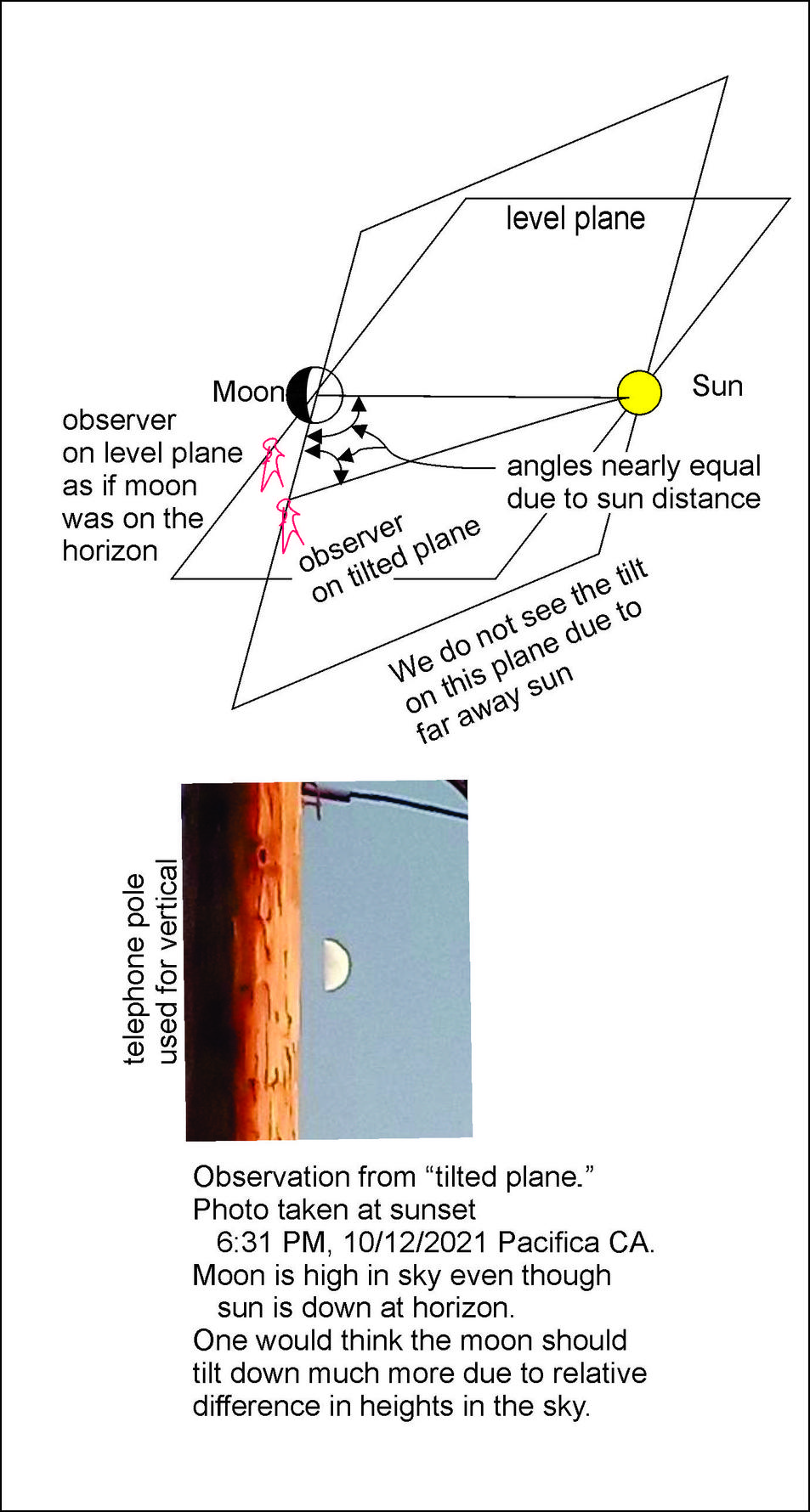 You can see this effect on the powerline above the railroad tracks in the picture you posted too, it doesn't look straight, even though it likely was in reality! The straight line between the sun and the moon is just even more curved. Just like what you see at http://chrisjones.id.au/MoonIllusion/ , like the top answer already posted. If you accept that the curvature of the powerline on this picture is just an optical illusion/distortion introduced by the camera, then so is the sun-moon illumation! 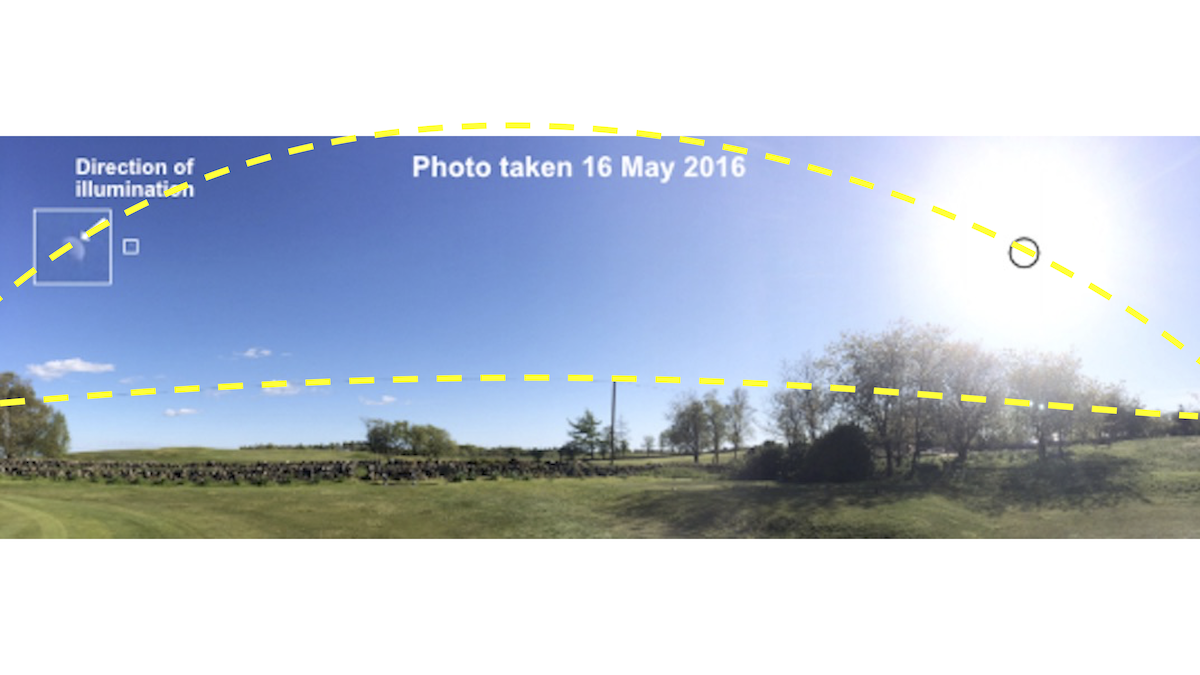 The error in your diagram is that you assume a rectangular and linear (0, 1 or 2 point foreshortening) perspective. As you can see in this VSauce video, straight lines in our surroundings actually become curved lines from a single eye (or photocamera) perspective. After you've seen the VSauce video, you can check that this holds true for you too: if you rotate your head, you'll notice that the place where your wall and ceiling meet will curve when you're moving from side to side. Straight lines, when viewed from below from left to right cease to be straight! A 5-point curved perspective better captures the way straight lines appear to us. 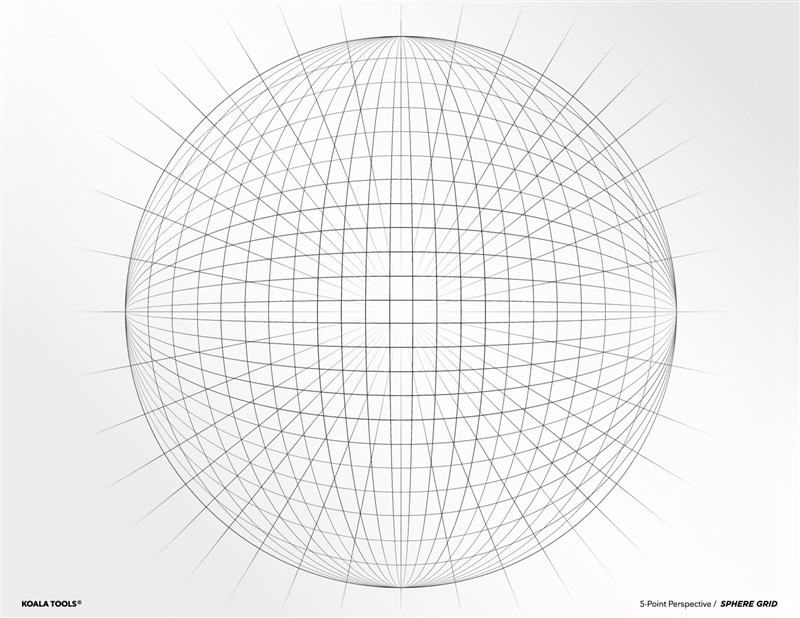 Note, by the way, that even from a "torch" perspective, as you insist, and without any optical illusion, we can get the moon shining "upward". Consider the following overview picture: the moon (left object) is illuminated by the sun (right object) in exactly the way you expect. Now, however, consider that you are an observer (where the two red lines converge), in particular, that you are standing below the sun and moon. As you know, if you stand below things, you cannot see what is on top -- and similarly, you can see more of what is on the bottom of that object. That is what's drawn in the dotted lines from the observer view: they tangentially hit the moon on the dark side on the bottom, and cannot observe the top of the moon. Just because we're below that object. 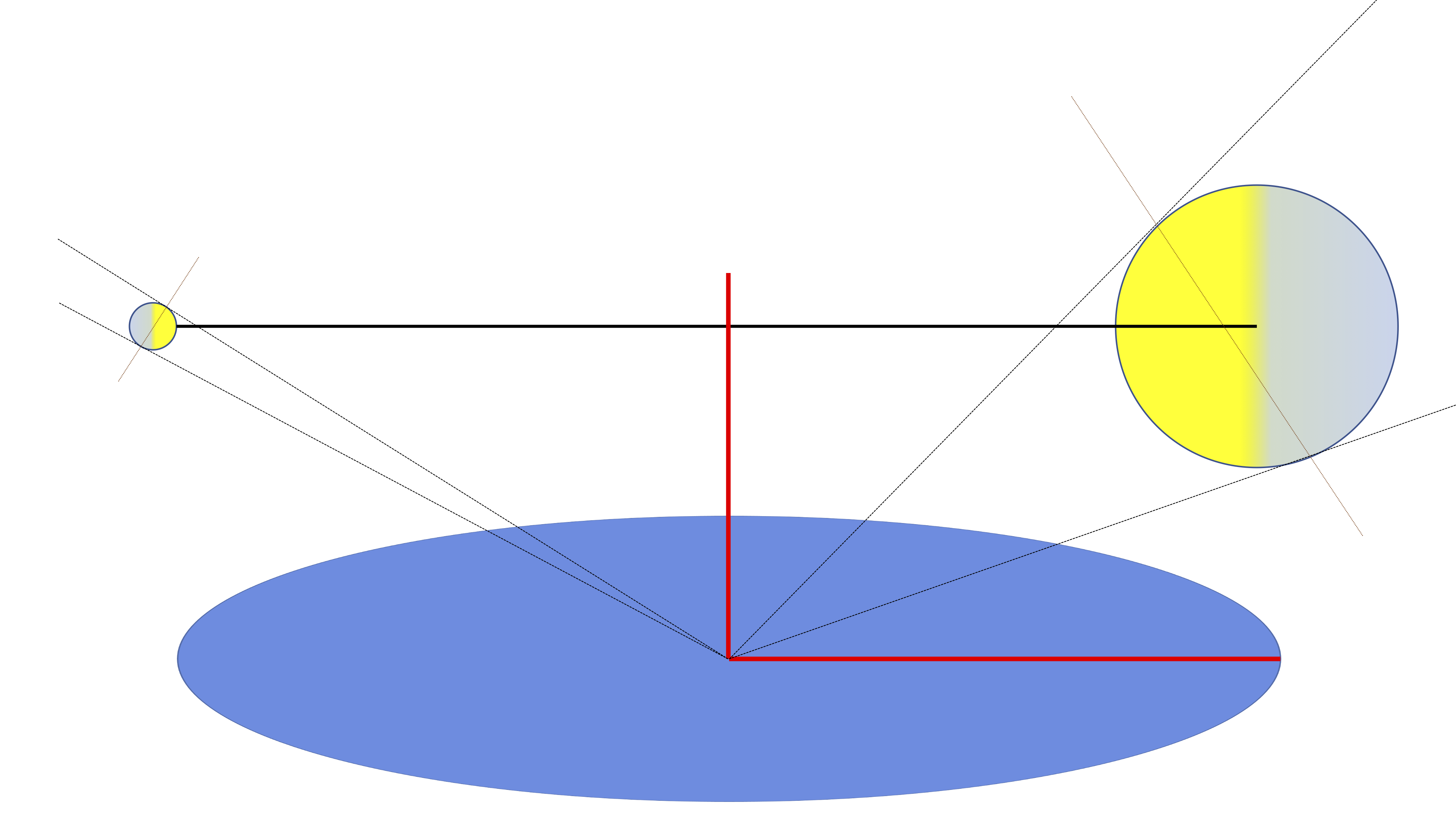 Thus, if you place yourself in the position of the observer, the objects will appear as if they have both rotated away from the horizon, because we can see both bottoms of the objects!

If you put the two effects together (one, the strange effects of panning from left to right to lines above us; and the effect of being located below the moon), we end up with the following effect, where it appears that the "moon" is facing upwards to the right in the first few frames when we're looking to the left, but once we zoom out you can see that the sun is actually level with the moon!

The effect nearly disappears entirely once I add a line connecting the two bodies:

Now the effect looks like it isn't even there anymore, because somehow our brains are able to make sense of the perspective. Note how in every single picture, the lines are all straight (so, no trickery with wide-angle or fish-eye lenses), but when we rotate from left to right, they seem to "change direction" from pointing northeast to northwest and back.

EDIT: I am making two simplifications which still display the "anomaly".

At sunset the observer can see the unlit part of the Moon at the bottom, so it appears illuminated from above. 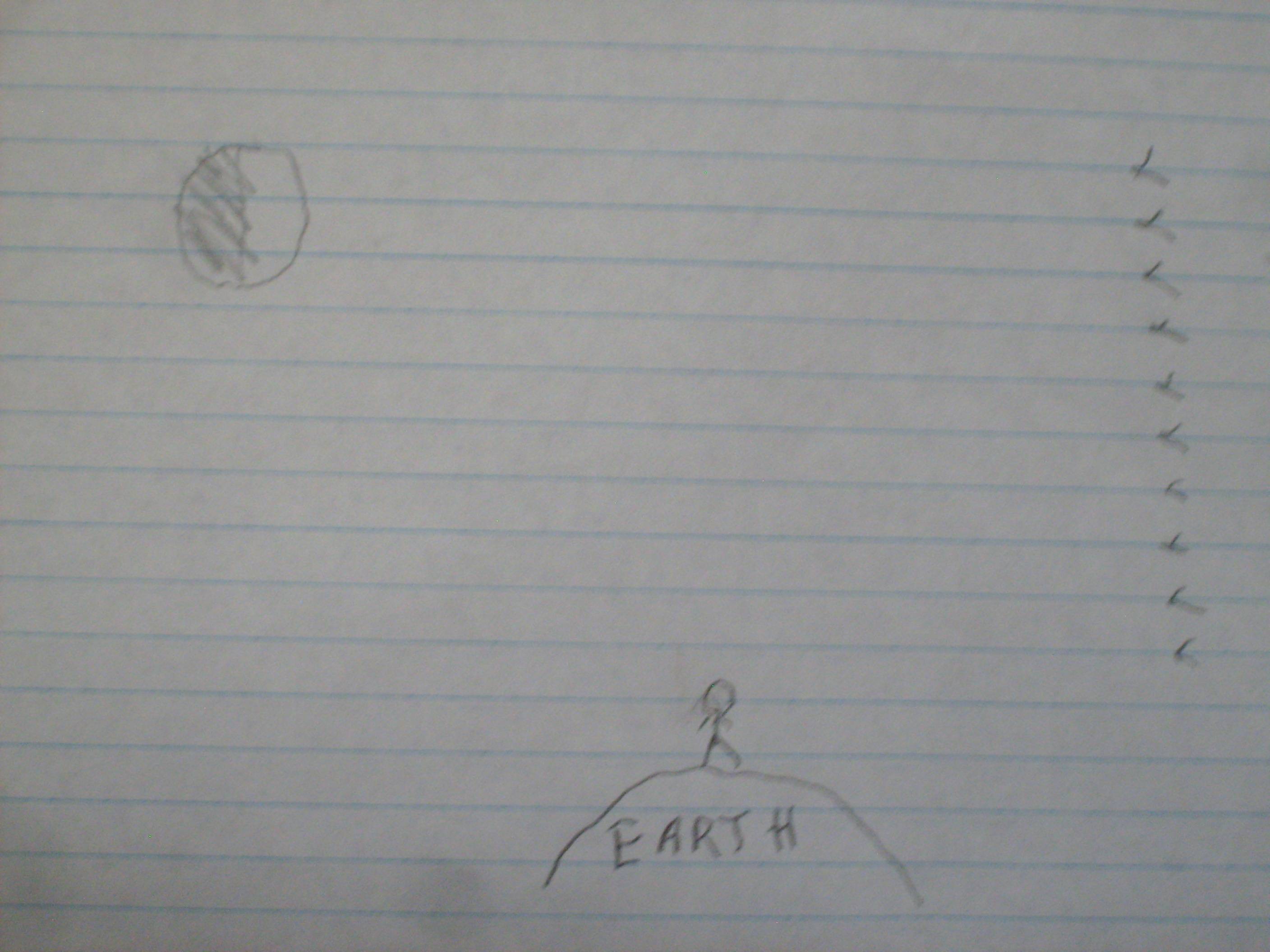 Here is what you do. Look at the moon. See which way the sunlit face of the moon is pointing, not in a picture but in a real-life view of the moon. Using your own perception, trace a line INCREMENTALLY through space that goes out in the direction "pointed to" by the lit side is pointing. Keep tracing that line until your line hits an object bright enough to light the moon OR until the line extends past the horizon. This process ill eventually lead you across the sky to the sun or in the direction of the sun at the horizon. Every. Single. Time.

If you find otherwise, then you have an insufficient sense of three-dimensional direction and that requires either some kind of skills therapy or else just acceptance that you can't accurately imagine 3-D line tracing in the real world.

Not the answer you're looking for? Browse other questions tagged sun astronomy visualization earth-moon or ask your own question.

0
What model best describes the alignment of the Sun and Moon during a lunar eclipse?
6
The sun sometimes appears pure white after rainfall, how can this be explained?
3
Difference in sun activity between two towns (Eastern and Western hemispheres)
1
Earth's orbit and historical sun-earth distance
22
Why were both the sun and the moon red today?
2
Atmospheric conditions needed that blocks all bright light during sunsets and allows you to stare directly at the sun
0
[How deduce from shadows, the angulation of the Sun that the Sun is 15 degrees over horizon?