Why are pole reversals not more detrimental to life?

This question is linked to the following question, and has two parts.

There are several factors to consider. The main one is the atmosphere (especially if you want to compare Mars with the Earth's during magnetic reversals). Earth's atmosphere is a formidable shield against solar wind and cosmic radiation. Each type of radiation have a different penetration, but in general the radiation dose associated to each type of radiation decays exponentially at lower elevations. For example for ionizing radiation the relationship is

Where $E$ is the dose, $E_0$ is the dose ate sea level and z is the altitude (reference). The following figure illustrate how the radiation dose drop at lower elevations. But if you extend that curve to 100 km you will be able to grasp how much of the incoming radiation is filtered by the atmosphere. 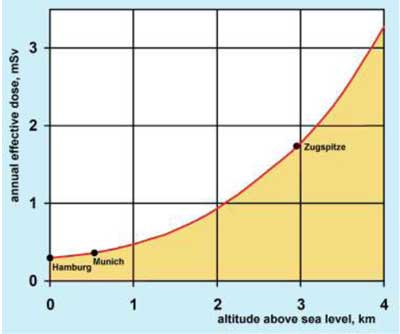 The fact that space radiation doesn't penetrate much can be observed in many different ways, one of them is noting that auroras (a.k.a. northern lights) usually never happen below 90 km of elevation.

Moreover, the reason why auroras happen only at high latitudes (i.e. near the poles), is due to the "geomagnetic latitude effect" that describe how radiations dose rates are minimal at the equator and maximal at the geomagnetic poles. Nevertheless, the atmosphere absorbs most of that extra radiation and life thrives in the arctic forest without any problems.

The other important point is: Would the paleontologic record of migratory birds populations and magnetic-dependant microbial life be good enough to detect a catastrophic population reduction on migratory birds and some microbial life that happened 780,000 years ago? I'm not an expert but I would be skeptical. In fact, 780,000 years seems to be enough time for the evolution whole new species and the rise of the migratory behaviour from scratch. More recent reversal events like the Laschamp event 41,000 years ago were much quicker than 1,000 years, and even so, I wonder how well we could reconstruct migratory birds populations that far back (considering that we have trouble reconstructing human populations back then).

Regarding migratory birds, you say that after the reversal the birds would migrate in the wrong direction. And that is quite questionable. In the lack of any point of reference, using an improvised compass to know the north-south direction is easy, but figuring out which side is north and which is south is much more difficult. Therefore, maybe birds use other means to figure that out which side of their compasses is north, means that don't depend on the magnetic field. For example, the side at which sunrise happen or something like that.

Finally, microbes evolve and adapt very quickly, so even assuming that some (or many) of them would die during reversals, I'm sure others would take their place. At the end the ocean microbiota is nutrient-limited, and all the nutrients not used by the dying species will be used by other species that can thrive with a weaker magnetic field. So I wouldn't be so quick to think that such event would lead to a food chain collapse.

National Geographic published an article about this in January 2018 - No, We're Not All Doomed by Earth's Magnetic Field Flip.

The Earth will have a magnetic field but,

Earth’s magnetic field could get weaker—but its strength is already quite variable, so that’s not necessarily unusual, and there’s no indication it will vanish entirely, according to NASA. Why? Because it never has.

However, if the magnetic field gets substantially weaker and stays that way for an appreciable amount of time Earth will be less protected from the oodles of high-energy particles that are constantly flying around in space. This means that everything on the planet will be exposed to higher levels of radiation, which over time could produce an increase in diseases like cancer.

During the prolonged change,

animals that use Earth’s magnetic field for navigation—including birds, salmon, and sea turtles—could get lost during their routine journeys. Eventually they will sort this out, and all other things being equal, life will go on. Lots of doomsday prophets have tried to equate geomagnetic flips with mass extinctions, but the data just aren’t there.

Not the answer you're looking for? Browse other questions tagged geophysics geomagnetism mass-extinction or ask your own question.

12
What are the ramifications to life on Earth when the Earth's magnetic poles switch?
13
Does the magnetic field really protect Earth from anything?
4
What would happen if you hypothetically happened to touch an aurora

20
Why Earth's magnetic poles are (and were) in their positions?
12
What are the ramifications to life on Earth when the Earth's magnetic poles switch?
7
Life on Earth previous to us
11
Why is the South Pole colder than the North Pole?
6
Why is ground water rising on these forest rings?
13
How long does a magnetic pole reversal take to complete?
13
Does the magnetic field really protect Earth from anything?
3
What "blobs" of molten material in Earth's interior are responsible for the rapidly moving north pole? Where are these blobs exactly?