Most statistics about climate change are based on climate data over the last 150 year (as long as records have been kept). This seems irrelevant in terms of the geological time scale of temperature variation on the earth.

In the last 400 million years, has there ever been a 200-year interval during which the rate of climate change was as great as it is today?

But please read the following comments and explanations:

Most statistics about climate change are not based only in the 150 years of instrumental records. We have many good temperature proxies that go back between a millennia and 70 million years. Among them: tree rings, growth bands in corals, layered marine sediments, bog and lake sediments, stalagmites and stalactites, ice cores (800,000+ years), and isotopic composition of shells of single-cell organism called foraminifera. This last one can be used to estimate the temperature of the deep ocean as far back as 70 million years. Although, the interpretation of the isotopic composition could be tricky, the caveats do not change the general picture presented by this long term temperature record. Here is a reconstruction of temperature based on foraminifera shells.

You can see that there were long periods of time with temperatures much higher than today. However, when it come to the rate of change this record doesn't have the resolution to answer your question. As a first remark, note that we don't have a reliable temperature record going 400 million years back, and for the ones that do extend multiple million years, the resolution is not good enough to see quick climate change events as the one we are experiencing now.

However, we don't need to go that far back to find climatic changes greater than the one we are experiencing today. Such changes are actually visible in the 800,000 years records recovered from antarctic ice cores. And actually, the best examples come from high-resolution Greenland ice cores that go only about 110,000 years into the past.

Unfortunately the second reference (a Nature paper) is behind a paywall so I'll add here figure 4, the most relevant to this question. 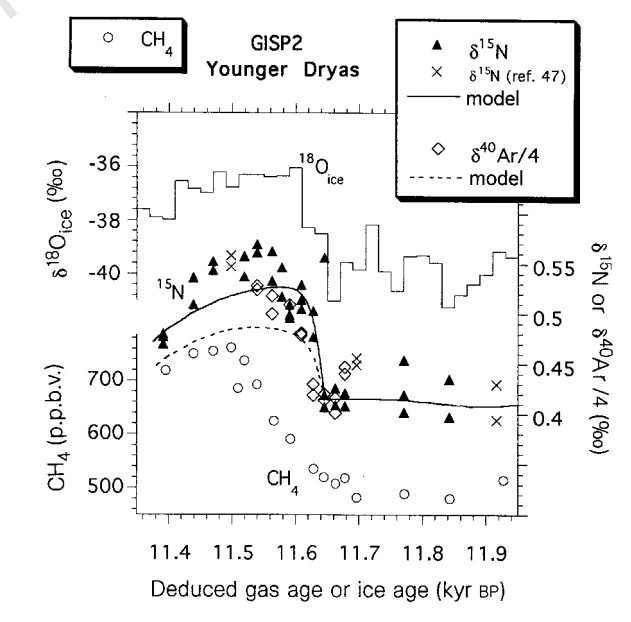 You can see how fast are the changes in methane concentrations and $\delta^{18}O$. As a rough reference, a change of one unit in $\delta^{18}O$ is equivalent to a change in temperature of 2 °C, therefore the big jump in the figure is about 10°C.

Now I could argue that given that agriculture appeared just after that change (~12,000 years ago). When assessing if we have faced in the past a climate changes as dramatic as the one we are observing now you have to focus on what happened after that time. And notably, since then, the climate have been very stable. In fact, the change we are experiencing now is the largest after the invention of agriculture (previous references and this one).

As a corollary, it is important to realize that Earth's climate is much more chaotic and capable of large changes in short periods that what you would think by looking at the written history, and that we have enjoyed a long period of calm that at some point, sooner or later will be followed by changes unprecedented in human history. The equilibrium we have enjoyed might be a kind of unstable equilibrium, and you might not need a very large perturbation to upset that equilibrium and send the system into a large climatic swing.

Not the answer you're looking for? Browse other questions tagged geology climate-change climate paleoclimatology or ask your own question.

15
Could the Dead Sea dry up? and if so, when?
10
Can volcanos change the climate?
9
Any historical examples of destructive climate warming?
5
Rate of climate change with and without humans?
10
What makes a nuclear winter so extreme and destructive?
0
Is there any natural phenomenon that can account for the 100 fold faster CO2 rate increase?
1
Does extrapolating current CO2 trends indicate 7632 PPM CO2 and 14C temperature anomaly within 200 years?
4
Are we entering a new Ice Age according to Milankovitch cycles?