Does the magnetic field really protect Earth from anything?

We have always heard that Earth's magnetic field protects us from harmful cosmic radiation and solar wind, that would otherwise strip the atmosphere away and kill us all due to high doses ionizing radiation.

Well, all that seem to actually be under debate. Because (if I understand the issue correctly), the magnetic field deflects most of the incoming charged particles, but on the other hand it increases dramatically the cross sectional area through which Earth interacts with the solar wind.

This figure from Wikipedia's Magnetosphere page will illustrate the problem: 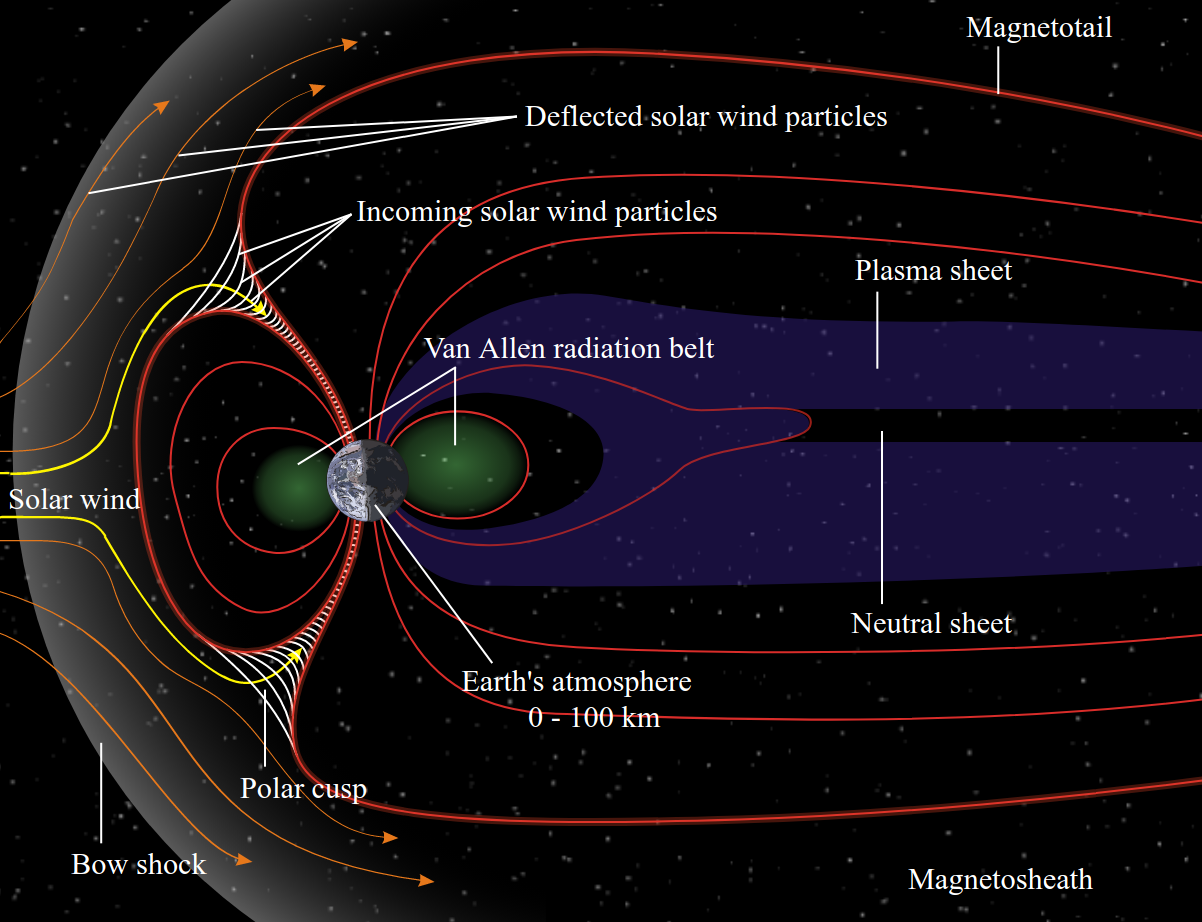 As you can see, most of the charged particles are deflected away from Earth (orange lines), but a fraction of them gets funneled towards the poles through the so called "polar cusps" (yellow lines), that's why auroras (a.k.a. northern lights) happen around the poles. As you can see, the size of the polar cusps "funnels" is comparable to the size of the Earth, therefore giving rise to the discussion if the magnetic field increases or decreases the amount of charged particles that hit the atmosphere: If the funnels are smaller than the Earth the magnetic field would decrease the amount of particles hitting the Earth, but if the funnels are larger the particles hitting us would increase.

These charged particles are usually cited as relevant due to two reasons:

The first point is only partially true, because the atmosphere itself is an extraordinary shield against cosmic and solar radiation. Therefore, even in the eventual shutdown of Earth's magnetic field, not much radiation would reach the surface anyway. That's perhaps one of the reasons why nobody has been able to link magnetic reversals to mass extinctions. More on that is discussed in this question.

The second point is also questionable, because although the magnetic field does redirect the charged particles to the poles, it is unclear if the amount of particles currently hitting polar areas is more or less than the amount that would hit the entire Earth in the absence of a magnetic field. Notably, atmospheric escape would be equally bad if it happen distributed over the globe or if it is concentrated at the poles.

And they cite Robert Strangeway (a leading scientist in the field) saying "My opinion is that the magnetic shield hypothesis is unproven". Strangeway also presented a poster on last year's AGU fall meeting describing the same skepticism: "Does an Intrinsic Magnetic Field Inhibit or Enhance Planetary Ionosphere Outflow and Loss?"

In that work he backs the above cite of Space.com with actual numbers:

Giving some credit to his skepticism, his work was cited in a 2018 paper written by most if not all the leading scientist behind the MAVEN probe that have been orbiting Mars since 2014. There they say:

our expectation is that stripping of atmospheric gas by the solar wind is minimized by the presence of a magnetic field (e.g., Hutchins et al., 1997), although observations of escaping ions at Earth suggest that this may not be strictly correct (Strangeway et al.,2017).

The second author of that paper: Dave Brain, also gave a very interesting TED talk where he mentions the topic: What a planet needs to sustain life (starting at minute 7:31).

I'm fascinated by the topic, but my understanding of the physics of Earth's magnetic field is minimal. So I wonder: What evidence is there supporting that the intrinsic magnetic field really protects Earth's atmosphere and its living organisms?

In other words: In the absence of models and speculations of how the intrinsic magnetic field interacts with charged particles: Is there any reason to believe that a stronger magnetic field offers more protection than a weak or negligible one?

Dr. Robert Strangeway kindly shared with me the poster he presented at AGU fall meeting 2017, the one I cited in the question based in the abstract only. I've included below some of the key parts of the poster with some text highlight added by me.

He focus on Oxygen loss as a proxy of water loss. And the answer to my question that can be derived from this work I think would be: 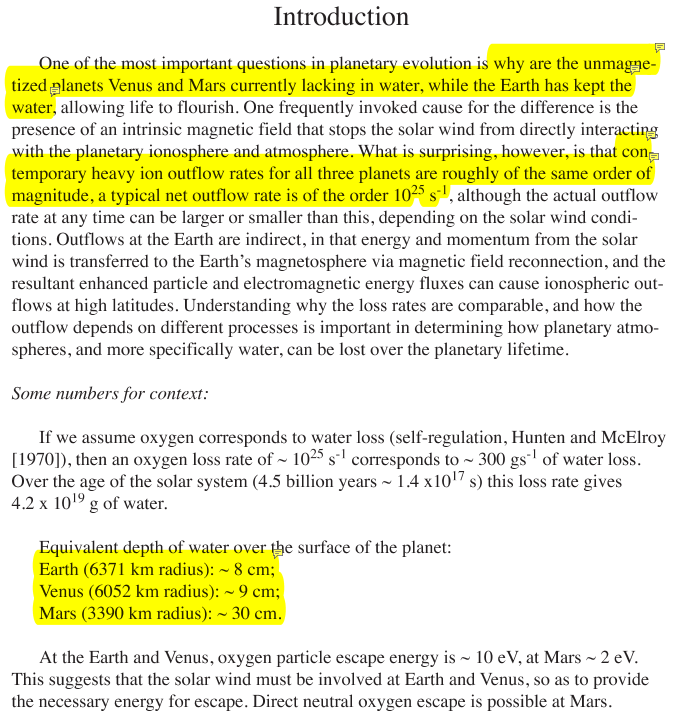 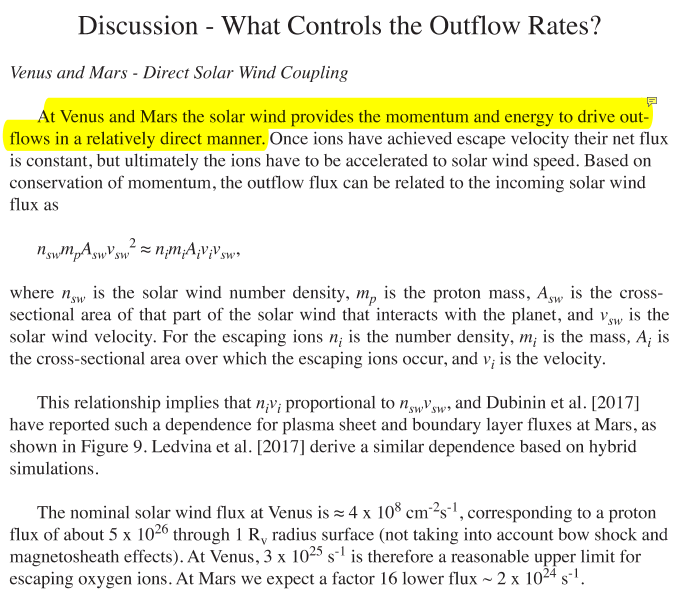 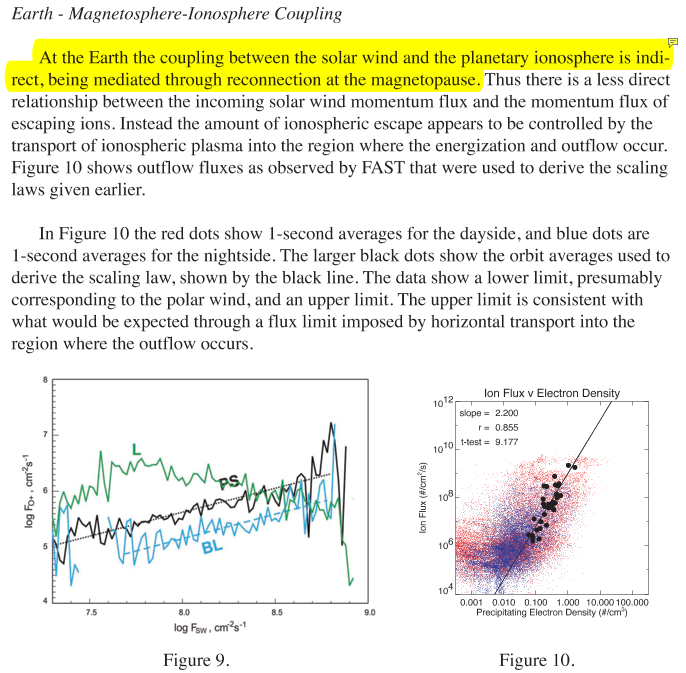 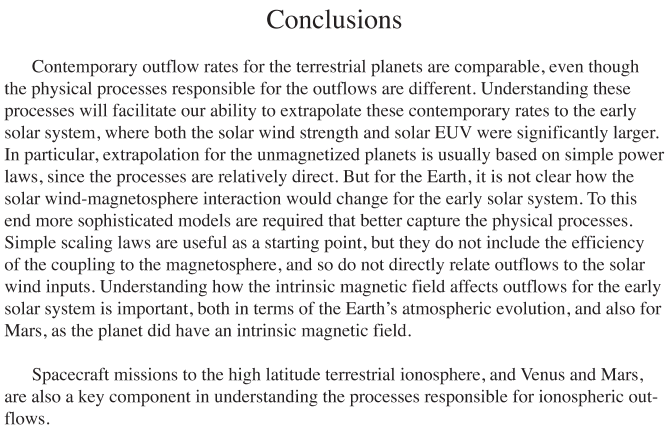 It seems your question was more like a thinking exercise rather than a question.

I cannot answer your question with robust confidence in the current state of knowledge. The fact is, I have always shared your skepticism on the matter, particularly when being taught this subject matter in graduate classes by the experts who work in the field!

What I can offer is a partial answer. Regarding how the magnetic field helps, the magnetic field lines can cause incoming solar wind particles to travel a LONGER path to get down lower into the atmosphere. They don't just have to veer poleward, adding more distance. Rather, in addition to that, the particles spiral instead of taking a direct path. This allows for energy loss through various mechanisms including synchrotron radiation (which occurs due to continuous angular acceleration of the charged particles). That alone reduces the energy available for kicking out our own atmospheric molecules into space. Whether or not the scale is significant is another question. In the end, questions like this are really only settled by observations. So, until we have more observations of escape rates for ionized and neutral atmospheric constituents, we won't have a sufficiently reliable answer. The seemingly most robust theory in the world can be wrong due to missing data, since theories are initially based on that very same data. So, let's get those satellites up there! :-)

The question is very long as is the answer and I don't have time to review all of it in any detail.

Most of the atoms in the universe are charged and most of them are moving very fast. A magnetic field will change the motion of a charged particle - that's basic physics. Now, magnetism may be hard to visualize, even with the right hand rule, it's not really something the average person is familiar with, but what we can say is that without a magnetic field, fast moving particles can fly directly into a planet's atmosphere and give other molecules a kick leading to their escape.

The in-flying molecules are usually protons or alpha particles, which are low mass and tend to escape the rocky planets anyway, so it's not an even trade. Any gas molecues that the solar wind knocks out are lost and the solar wind particles, even if temporarily absorbed by the atmosphere, likely escape on their own anyway.

How does the magnetic field protect against that? It certainly prevents the direct collision from the sun, but some of the captured particles hit the Earth near the magnetic poles.

This is a video, posted on a NASA website with an basic guideline of what happens. It's pretty clear, at least on this video that many more particles are deflected than hit the Earth.

The Earth, for example didn't have a magnetic field for about a billion years, it first formed about 3.5 billion years ago and our young sun was probably much more active in terms of coronal mass ejections, so it's likely that Earth, Venus and Mars were all pummeled by the Early magnetic field.

It's fairly often said that the magnetic field protects the planet's atmosphere and water-vapor and, as a result, it's necessary for life and I think you're right to question that, because for one, it's good to question things, and for two, there are unanswered questions in this particular field of science. It's not (to my knowledge) well understood how quickly and under what circumstances a planet can be stripped of it's atmosphere.

I do think a planetary magnetic field does provide some protection and shielding, even if the solar storms may not be entirely to blame for removing water and atmosphere from a planet. Solar storms are harmful in other ways too, they can be deadly to astronauts. Even in the partially protected space station, solar storms are a concern and NASA has long paid attention to the risk of solar storms to astronauts, so creating a magnetic shield around Mars (should we ever send people there) would have other benefits as well beyond whatever protection it provides for the thin Martian atmosphere.

You might get some better answers for this on Astronomy.

Not the answer you're looking for? Browse other questions tagged atmosphere geomagnetism solar-terrestrial-physics paleomagnetism magnetosphere or ask your own question.

43
(How long) would Earth's atmosphere last without a global magnetic field?
6
Why are pole reversals not more detrimental to life?