What are good metrics to compare climates?

I'm interested in visualizing climate data across the conterminous U.S. to determine regions that I would be interested in living in. So far, I've pulled in NOAA data, and I've:

At first, these seemed like "good enough" approximations, but I'm discovering that this approach is somewhat inadequate because it is:

I was initially seeking to discover areas with a high mean temperature, low variance in temperatures annually and daily, and low rainfall. What metrics could I be using to improve this investigation? Thanks!

The Köppen climate classification is a classic metric to classify climates: 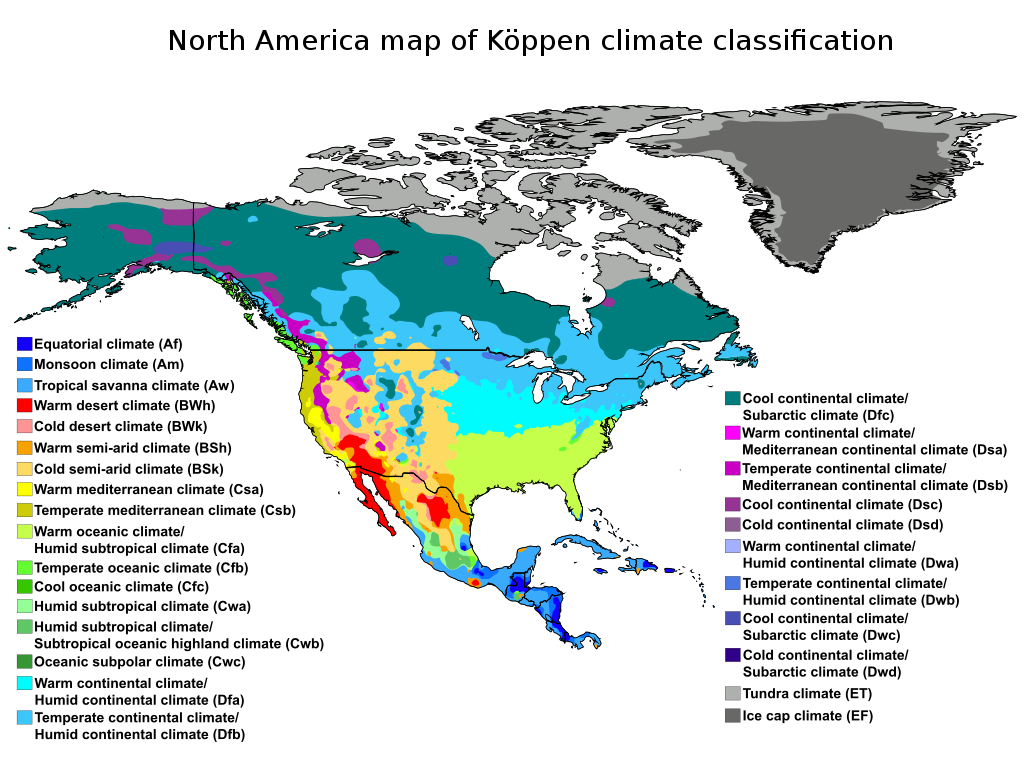 It classifies climates based on the number of months with temperature below and/or above certain thresholds, and on whether rainfall is evenly distributed or concentrated in a particular season. You will find details on the definitions on Wikipedia.

An alternative is the Trewartha classification:

Note that the climate you seek may not exist:

I was initially seeking to discover areas with a high mean temperature, low variance in temperatures annually and daily, and low rainfall.

A low temperature variance tends to happen in humid climates. Dry climates tend to have large temperature variances. A subtropical highland climate may come closest to what you seek, although it's not particularly dry. In the Köppen classification, this would be Cwb. From the Wikipedia article:

Cwb = Subtropical highland climate or Monsoon-influenced temperate oceanic climate; coldest month averaging above 0 °C (32 °F) (or −3 °C (27 °F)), all months with average temperatures below 22 °C (71.6 °F), and at least four months averaging above 10 °C (50 °F). At least ten times as much rain in the wettest month of summer as in the driest month of winter (an alternative definition is 70% or more of average annual precipitation received in the warmest six months).

I don't think any place with Cwb climate exists in the United States. Quito is famous for being the city of eternal spring, and some areas of Mexico are classified as Cwb, as in Johannesburg. I suspect the closest you'll get in the USA will be somewhere not too high, not too low in the Sierra Nevada.

Zech–Aslan energy statistic stands out as the most recommended metric

Baseline setup and dataset The data that are used represent some aspects of the historical (recent past) and future climates at each grid cell of an array. The reference location corresponds to the grid cell for which analogs are sought, and candidate locations are all grid cells contained within the investigation domain, which includes the reference location itself. As presented in Fig. 1, the investigation domain is restricted to the following geographical limits: 358–508N, 608–1008W (excluding lake and ocean grid cells). When not otherwise stated, the reference location is the grid cell that includes the city of Montreal (centered at approximately 45.68N, 73.58W and identified by a star in Fig. 1). For some calculations, 126 reference locations are used (also identified in Fig. 1). Each location’s climate is synthesized by a set of 90 values, accounting for values of three annual indicators over a 30-yr span. The historical and future periods extend over 1971–2000 and 2041–70, respectively. 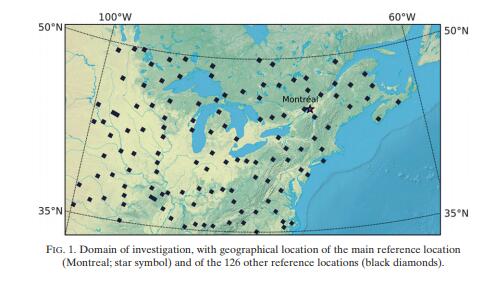 Not the answer you're looking for? Browse other questions tagged meteorology climate climatology statistics or ask your own question.

9
A good book or source for climate science and meteorology basics?
3
What statistical methods are best for analyzing long-term rainfall data?
7
What are the differences between Climatology, Meteorology and Atmospheric Science?
3
CMIP5 Historical experiments, what do they mean?
1
How should one compare the comfort of climates?
3
How to best visualize temperature increase (due to climate change) using GHCN data?
0
List some common metrics to analyze the atmospheric vertical motion?
2
How to calculate maximum and minimum mean monthly temperatures?