Does the global temperature vary daily (hotter and colder days)?

Earth's current average global temperature (i.e. including hot deserts and cold polar caps) is reported be somewhere between 14°C and 16°C (depending on sources and methods).

This temperature varies on a long-term basis due to climate change.

But does it also vary (substantially) on a daily basis ?
I.e. are there hotter and colder days (worldwide) ?
Or is it exactly the opposite, namely a zero-sum game: A hotter-than-average day in – say – Australia inevitably goes along with a colder-than-usual day somewhere else on the planet to make up for the difference, so that the global temperature stays the same from one day to the next (because energy is not created but only transferred from one region to another) ?

As an example, below are the relative temperatures (i.e. colder/hotter than expected/average) for 3 Feb 2014. Would the hotter and colder temperature regions balance out (compensate one another), so that the global temperature on 3 feb 2014 is the same as on 2 feb 2014 and 4 feb 2014 ? 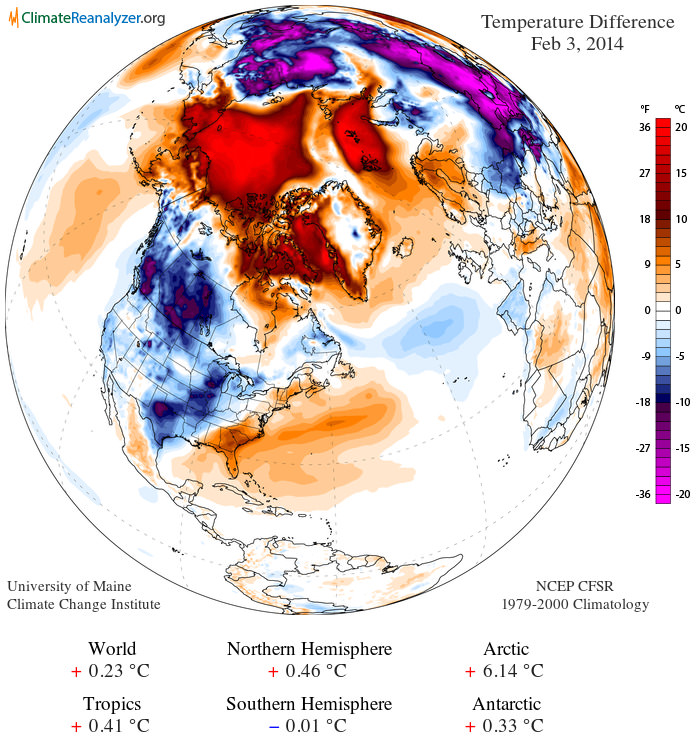 (Please note: The image doesn't exactly illustrate my question, because it doesn't depict the air temperature difference between 3 Feb 2014 and the previous day, but between 3 Feb 2014 and the average for [3 Feb, I assume] 1979-2000. So due to global warming, 3 Feb 2014 was obviously warmer than 3 Feb in previous decades – by 0.45°C to be precise, as the sum of northern hemisphere + southern hemisphere = -0.01°C + 0.45°C = +0.45 °C. But my question is not about global warming or long term trends, but daily variations. I just couldn't find a similar heat map depicting temperature differences between one day and the next, so I just took this image for illustration purposes, although it doesn't perfectly relate to the question asked.).

As Earth surface temperatures don't necessarily correspond to the air temperature (see below), please distinguish both cases in your answer, i.e.:

Andreas Schmittner, Oregon State University: "It is not the average temperature of Earth that is reported but the average air temperature near the surface (2 m) of the Earth."
source: researchgate.net/post/It_it_misleading_to_report_the_average_temperature_of_the_Earth

I would appreciate if your answer included both a source for your claim AND an explanation (i.e. WHY the global temperature can or cannot vary on a daily basis).

The best answer would include a diagram or table of global average air and Earth surface temperatures for any given month, since this couldn't be argued with.

The site http://www.karstenhaustein.com/climate.php comes closer to answering your main question with a daily anomaly graph:

Indeed it's still not the actual average temperature... and I was quite interested to see if there are annual global fluctuations in global mean temperature. Surprising how much focus is on anomalies, but how little most sites note the mean temperature itself. But eventually I found NOAA's monthly global climate reports, and was able to piece together the "globally averaged temperature over land and ocean surfaces" for each month and put together this graph: 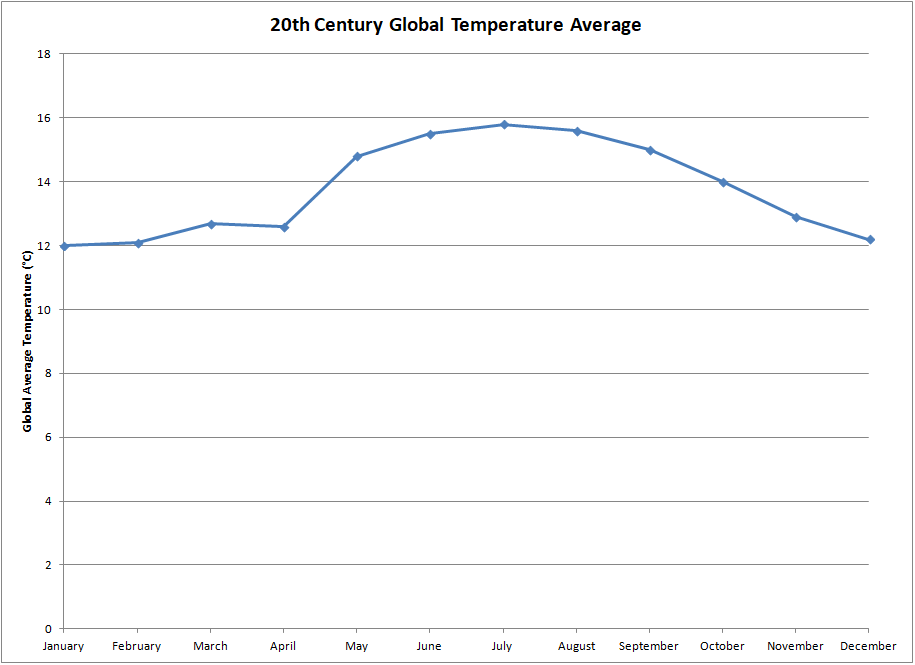 (One trouble to point out in global totals such as these require the whole globe... so observation of the full far reaches... but we still have a somewhat limited surface observation networks in spots, and each satellite can only see a portion of the globe at one time, and all it's put together by varying data assimilation methods, so there will be some limitations\variation in any global estimates of it [as you can see later down that Karsten Haustein's page in the section comparing CFSR-GFS, NCEP reanalysis, and GISS temperatures])

But Karsten's graph above and all the other plots from their site are useful in showing real-time and the past that there are definitely some real oscillations day-to-day, but also that there is indeed quite a bit of stability whereby large regions of hot temperatures will tend to be balanced quite a bit by reduced temperatures elsewhere.

This conceptually would seem to make sense to me, as in the end the guiding framework would be that the energy put into the Earth system (by solar radiation) must equal the energy coming out in the long run. That in itself wouldn't prevent fluctuations in the radiating temperature/energy sent out to space (related example: if you put your food in the oven, it takes in some of the energy, radiating less than it receives, and thereby gaining temperature until it gets up to temp).

This is one reason I should expect the global average temperature as a whole does shift some through the year: because water changes temperature more slowly than land, and the NH and SH have different coverage, there should probably be differences/lag in temperature and energy absorption/emission depending upon which portion of the Earth is receiving more sunlight. Additionally, while the sun's energy is very constant, and the tilt only changes which region receives the energy but not the total amount incoming, there will actually be some overall change in how much energy we get into the lower parts of the atmosphere/to Earth's surface globally day-to-day and over longer periods due to variation in how much snow, cloud cover, and aerosols absorb/reflect some of the energy before reaching near the surface.

Overall, this would make sense to see a global peak in July (NH summer), when both more of the "warm Hemisphere" receiving increased energy is land, and more less of the "cool Hemisphere" is land able to hold snow cover.

When it comes to any specific layers within the Earth system, be it the surface ground/water, or the atmosphere at 2 meters above the ground, or any other height for that matter, I'd expect the answer would likely be the same: there is some fluctuation both daily and seasonally. It's indeed not a zero-sum game because of the variations in the makeup of the globe. But because the overriding principle is net energy balance of the Earth, those daily/seasonal changes are likely kept to a few degrees tenths of a degree in the short-term and a few degrees Celsius innerannually.
The ground/ocean are the primary heat source of air near the ground (air itself doesn't absorb much solar energy). So generally fluctuations in global average air temperature (at 2 meters) should connect very well to changes in global average ground/water temperature... though differences in heat capacity and absorption spectra between air/soil/water/etc likely cause the sizes to be different, and probably small differences in the synchronization as well. But overall, they should have very similar patterns.

Not the answer you're looking for? Browse other questions tagged meteorology atmosphere geophysics temperature planetary-science or ask your own question.

3
Is it hotter in different places with the same air temperature?
4
Global Gridded Daily Temperature (at 2m): difference between GEFS Reforcast and NCEP Reanalysis
6
Is there a way to calculate the ground and 10m temperature from standard 2m temperature measurements?
2
Is winter hotter at the Equator?
14
Why is the temperature between the earth core and surface not distributed linearly?
9
Where did the daily temperature variation go?
2
Did global temperature increase or drop in the last 2 years (2017-2018)?
2
How to calculate maximum and minimum mean monthly temperatures?
2
What is the correct way to report historical daily Max / Min / Avg Temperature by City?