How do scientists reconstruct pre Cretaceous continent if all plates that are currently left are younger than Cretaceous?

I have read that the oldest oceanic plate that we see today is from the Cretaceous period. If so, how do scientists reconstruct plate movements and continental structure pre Cretaceous? And aren't all fossils before Cretaceous lost?

Why are we able to deduct geology information pre Cretaceous? And what is the oldest period we are able to gain information from?

You forgot about continents

First of all, it's necessary to point out the false premise in your question: It is not true that "all plates that are currently left are younger than Cretaceous". There is a near-continuous record of rocks stretching all the way back to the Hadean Eon 4 billion years ago. And there are older crystals called zircons that are found as inclusions in younger rocks.

Continents have been built up little by little over geological time. Their rocks are a mixed-up jigsaw puzzle of various types and ages. It's the geologist's job to figure out how those pieces fit together.

Here's just a taste, and it doesn't even show the complexity of the puzzle in North America by a long shot: 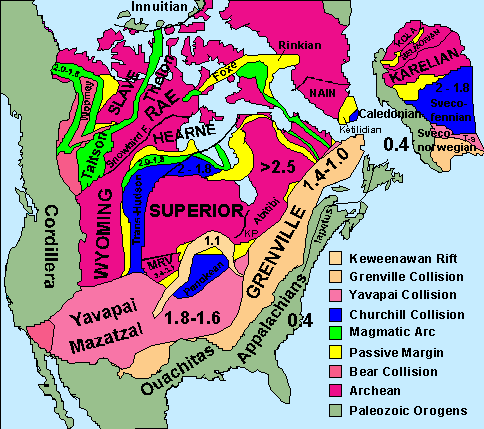 It is true that the oceanic plates are mostly destroyed by subduction, but the oceanic crust has to go beneath something, and that's often a continent. Besides, subduction helps make continents grow:

The oldest oceanic crust currently at the seafloor is in the eastern Mediterranean. In an article in Nature Geoscience Roi Granot of Ben-Gurion University of the Negev suggests that the [Herodotus Basin] is a remnant of ancient Tethys Ocean, having formed up to 340 Ma during the Early Carboniferous period. Most oceanic crust is 200 million years old (Jurassic) or younger. They're an important part of putting the puzzle together, but as I stated at the beginning of my answer, the geological record is much older, because of continental rocks.

Finally, there is really old oceanic crust in the form of ophiolites, which are bits of oceanic crust that have been incorporated into continents. Since they're no longer part of the oceanic conveyor belt, some can be quite old. The oldest is about 3.8 billion years old.

Not the answer you're looking for? Browse other questions tagged plate-tectonics continent or ask your own question.

21
Why are oceanic plates denser than continental plates?
21
What caused the bend in the Emperor/Hawaii chain of islands, 45 million years ago?
9
Continental collision – evidence left of river mouths and estuaries along the boundary?
2
Is plate tectonics a hoax theory? How can tightly packed plates move?
4
What formations are to be expected to develop between the transform boundaries of oceanic and continental plates?
10
Do Tectonic Plates Merge?
6
How can linear oceanic ridges (like the East Pacific Rise) be explained by single point mantle plumes?
3
Do tectonic plates "float" over the mantle and "collide" like icebergs?
4
What sort of a plate is the Sunda plate?

// TODO sg: TMP solution until we are confident in our current implementation of async imports // once we are, we can move the if into the js entry file and dynamically load the mark obsolete module