At the same speed, is a tornado as dangerous as straight wind?

If we have a place with wind at a given speed, and a tornado at the same speed, are they equally dangerous, or the tornado is more powerful?

I'd have to say a tornado would be more dangerous than a straight wind of equal speed. Tornados have a very low-pressure center and violent updrafts as can be seen in this YouTube video . As the roofs are blown off you'll notice they get blown upward as well as sideways.

I think that in this situation the primary difference would be the fact that the tornado is more capable of moving air (and possibly objects) upwards. Whereas regular wind would mainly cause lateral displacement of entrained objects. Consequently it is also dependent on the setting: the lateral wind might cause high waves and flooding in a coastal setting. A second consideration originates from the driving forces: regular winds are mainly driven by air pressure gradients which on itself are not 'dangerous'. Tornado's, on the other hand, often are induced by weather systems that include heavy electrical charges (potential thunderstroms) and hail. This might not answer your question explicitly but I hope this gives some insight in the considerations

Straight-Line Winds vs. Tornado point out that Straight-Line Wind from thunderstorms is much more common than damage from tornadoes. In fact, many confuse damage produced by straight-line winds and often erroneously attribute it to tornadoes,could speculate a tornado as dangerous as straight wind.

IN - all wind flows INTO a tornado. Debris is often laying at angles due to the curving of the inflow winds 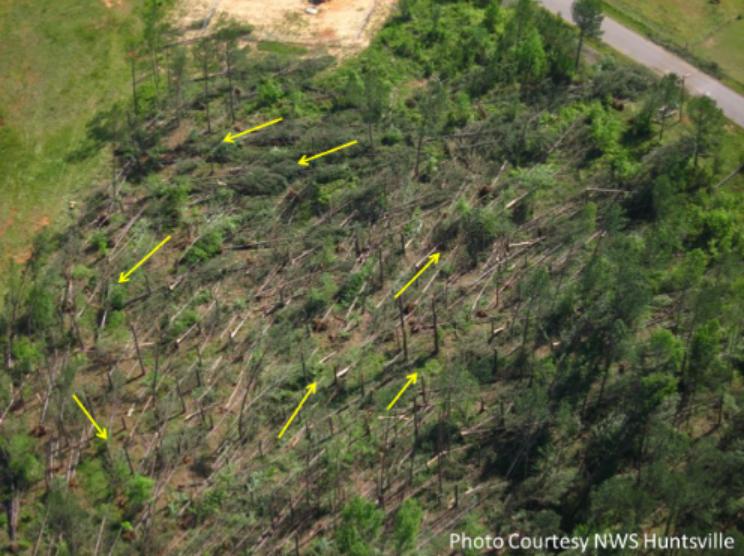 OUT - all wind flows OUT from a downburst. Debris is often laying in straight lines (hence the term "straight line winds") parallel to the outward wind flow

When extensive damage is noted, the National Weather Service may dispatch a damage survey team to determine the cause and nature of wind damage. Survey teams look for evidence of a circulation in debris fields to determine if the damage is straight-line winds or a tornado. Based on the degree of damage and damage indicators, a maximum wind speed is assigned to either the downburst or tornado.

Not the answer you're looking for? Browse other questions tagged wind tropical-cyclone storms tornado or ask your own question.

5
How to determine that sustained wind speed exceeded the threshold value?
9
Long-term Wind Speed Forecasting: reality or wishful thinking?
5
How does the tornado chaser locate the spot?
5
Judging wind speed based on flags and inland-water observations
1
Converting Wind Movement to Wind Speed
19
Why do trees break at the same wind speed?
3
How big was the eye of the El Reno tornado?
2
Why isn't wind speed considered when calculating a heat index?