What would happen to the Earth if there were no seasons?

If the Earth was in a fixed equinox state, what would the equilibrium temperature be at each pole? Assume daily cycle and convection and so on operate as usual, just that it's permanent sunset at both poles.

Bonus questions: Would the equilibrium temperatures be significantly different if Earth was fixed at solstice?

(Note: I misunderstood this question and wrote an elaborate answer that wasn't the answer to that question. So, to do not throw my answer to the trash, I'm asking here the question I did answer, which I find rather interesting anyway).

In a short timescale, let's say one or two years after a permanent equinox state, the temperature would be basically the current mean annual temperature. This is because if we take the premise of keeping heat transport by convection (on the sea and the atmosphere) as it it today, the total energy inputs and outputs would be the same. Therefore, the same mean annual temperature would occur but without seasonal variability.

To simplify things, let's use a simple model of temperature v/s latitude (that will also be useful in the discussion later): 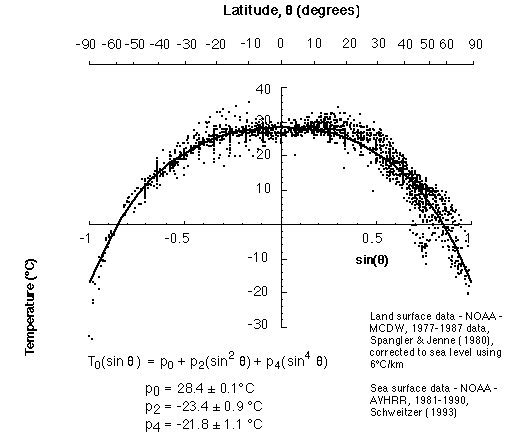 Using that formula, the temperature at the poles (reduced to sea level) would be -16.8 °C (from the figure actual data points it can be seen that in real life the south pole is much colder than the north pole).

Now, the previous assumptions contradicts the requirement of "equilibrium", because the above scenario is far from steady state.

So now I will go on to try to describe what would happen to Earth's climate in your hypothetical scenario:

One thing that we learned by studying how the Milankovitch cycles trigger and reverse Pleistocene ice ages, is that to initiate an ice age cold winters are not necessary, what is needed are cold or mild summers. Currently, the inclination of Earth axis (a.k.a. obliquity) varies between 22° and 24.5° , with a mean period of 41,040 years. When the inclination is 22°, mild summers occur and, therefore, the perfect condition to initiate an ice age (specially when combined with other ad-hoc orbital conditions). The permanent equinox situation you propose, is equivalent to an obliquity of 0°, that would lead to the coldest possible summer (this is, no summer at all). Therefore, such condition would set the Earth on track for an intense and never-ending ice age.

Let me explain how this could work: Using the formula above, the temperatures would be permanently below zero between the poles and latitudes 58.3°. Therefore, snow would start to accumulate in those areas, building an ice sheet and once the ice sheet gets thick enough it would start flowing outwards.

The ice sheet then becomes self-sustaining due to two positive feedbacks:

Therefore, the polar ice sheets and their floating extensions (ice shelves), would slowly take over the Earth, and bring it to a state like the Snowball Earth hypothesis that proposes that Earth surface's became entirely or nearly entirely frozen at least once, sometime earlier than 650 Mya (million years ago).

In your scenario, the equator would constantly receive maximum solar irradiation, therefore, perhaps it could be spared by the ice sheets, but you would need to run a model to figure that out.

But if we assume that the ice sheets would engulf the whole planet, it is easy to calculate the Earth's effective radiative temperature, that is equivalent to the mean temperature. To avoid going into the math (that is quite simple anyway), we can use the Indiana University's Planet Temperature Calculator, that shows that if we crank Earth's albedo from the current 29% to a 80% (a reasonable figure for snow), the mean temperature would drop from 15°C to -63°C. So it would be pretty cold. The actual temperature in the poles would depend on how much energy transport is there from the equator to the poles. A model would be needed to figure that out too.

Eventually, it will happen what is usually thought to have allowed Earth to escape from ice ages: As the land is covered in ice, it can't take up CO$^2$ from the atmosphere (normally happening due to the weathering of silicate rocks), but the volcanoes keep putting CO$^2$ into the atmosphere. Therefore, at some point the amount of atmospheric CO$^2$ is so large that the greenhouse effect can rise the temperature enough to melt the ice sheets and go back to what we call "normal".

This is already too long so I'll refrain to address that bonus question. However, I'll say that the orbital configuration to have permanent summer in either hemisphere would be quite difficult to attain. You would need the Precession period of the Earth to be (and remain) exactly one year long.

Not the answer you're looking for? Browse other questions tagged climate seasons ice-age axial-obliquity or ask your own question.

8
What would the equilibrium temperature be at the poles in a world without seasonality?

27
Would the Earth function the same spinning the other way?
11
What would happen if we could revert $\mathrm{CO}_2$ production but took it too far?
8
What would the equilibrium temperature be at the poles in a world without seasonality?
10
Wet and dry seasons - what are they and how do they form?
3
What would be the impact on tides if the earth had no tilt?
1
Are the length of seasons the same globally?
5
Have the seasons always been?