Is there a "submerged object" in Australia that causes a magnetic deviation of 20 degrees?

This answer quotes this blogpost as an example of a magnetic anomaly:

Is there really a verified magnetic anomaly in north-east Victoria, Australia of 20 degrees? If so, is there a naturally occurring phenomenon (e.g. large sub-surface ferromagnetic rock formation) that causes it?

A link to some deviation map or other verifying, quantitative source is requested, thanks! 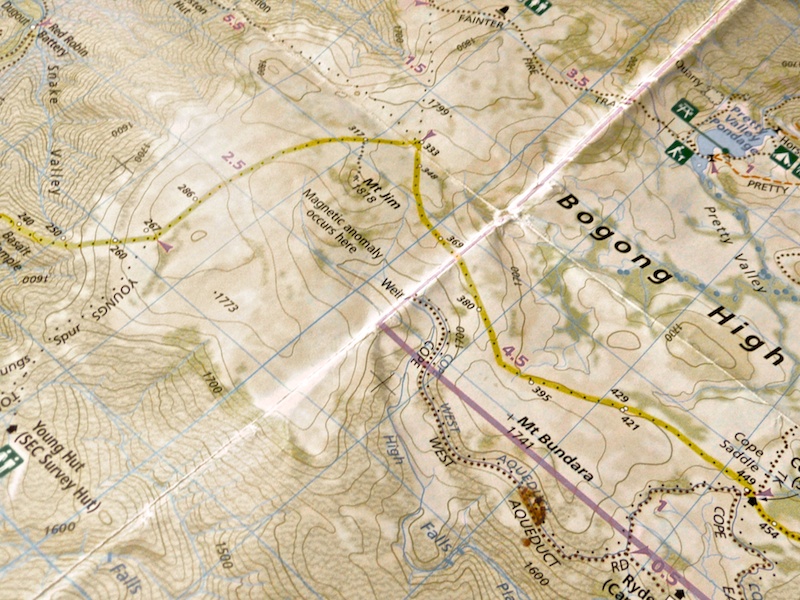 I'll disagree with Camilo Rada's answer, and show that there is definitely a magnetic anomaly.

We start with the interactive geophysics map of Geoscience Australia, Australia's federal geoscience agency. Our region is this: 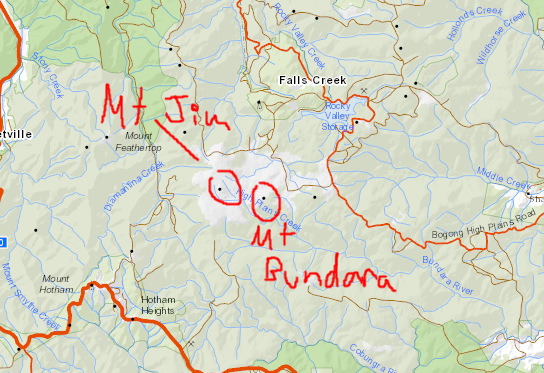 Here's the same area with magnetic intensity layer turned on: 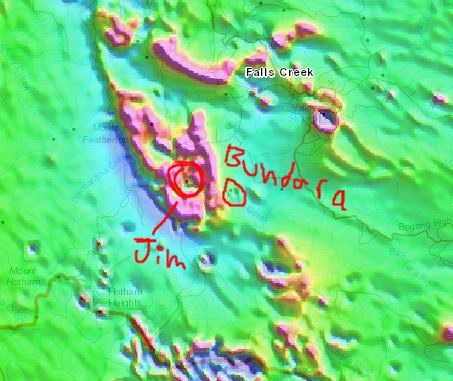 You can see a clear magnetic anomaly in this area, and it's actually much more widespread than noted on your map.

If so, is there a naturally occurring phenomenon…that causes it?

In general, answers to questions like these are yes. But let's explore it further with the geological map of the area: 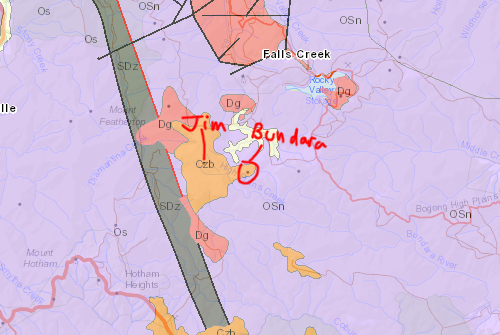 Overall, the rock type around is "OSn" and "Os". According to the legend, these are high grade metamorphic Ordovician and Silurian rocks, and neighbouring rocks are siliclastic which tells me they shouldn't be too magnetic (confirmed by the magnetic map). The area of Mt Jim has "Dg" (= Devonian granites) which might be slightly magnetic. But here's the thing you were looking for: "Czb", which is short for Cenozoic basalt. And basalts are magnetic.

So to answer your question, the source for the magnetic anomaly isn't a "submerged" (buried would more appropriate here btw), but a basalt fully exposed on the surface.

Interestingly, the blog post mentions the presence of basalt, so it's not entirely clear why they claim that there's a "massive, yet unknown, submerged object". Most probably there's simply more basalt, or its intrusive analogue: dolerite or gabbro. These targets are attractive for the mining industries. I would be surprised if it hasn't been drilled at some point by an exploration company, and then the underground cause of the anomaly would be very well known (but probably not publicly).

The Mount Jim in your map seem to be the one located at 36° 55' 17" S and 147° 13' 01" E. Although, magnetic anomalies are not mapped over the whole worlds, the World Digital Magnetic Anomaly Map provides the best compilation, and there is good data around your area of interest.

I've loaded the magnetic anomaly data of the World Digital Magnetic Anomaly Map, and plot the location of Mt. Jim over it (red dot), for comparison, the same dot is shown over a satellite map. All in the following animated gif:

As you can see, it doesn't seem to be any specially significant anomaly around Mt. Jim. However, this data show the magnetic anomaly reduced at 5 km of elevation. Therefore, a very strong but localized anomaly might not show up here.

One other thing that is estrange in your reference, is that a magnetic anomaly would not produce a consistent "-20 degree magnetic compass variation". Instead, the magnitude and direction of the variation would strongly depend on how close and where are you relative to the anomaly.

Not the answer you're looking for? Browse other questions tagged geology geophysics geomagnetism rock-magnetism or ask your own question.

17
What causes the Earth to have magnetic poles?
4
Are the magnetic elements of meteorites that have struck Earth aligned with the magnetic field?
3
How probable is is that earth magnetic field will change 180 degrees at once?
6
Does Magnetic Deviation depend on altitude?
3
Is there any case that changed from earthquake safe zone to danger zone?
3
Is there a high-temperature, non-magnetic glue that doesn't dissolve in water?
1
Is there a name for subduction boundaries at the North of Australia?
7
Is there evidence of multiple poles (higher order than dipole) in earth's magnetic field?
3
Do we know anything about the nature of Earth's core that hasn't come from magnetic or seismic measurements?