Is this a contradiction in Wikipedia's definition of temperate zone?

In geography, the temperate or tepid climates of Earth occur in the middle latitudes, which span between the tropics and the polar regions of Earth. 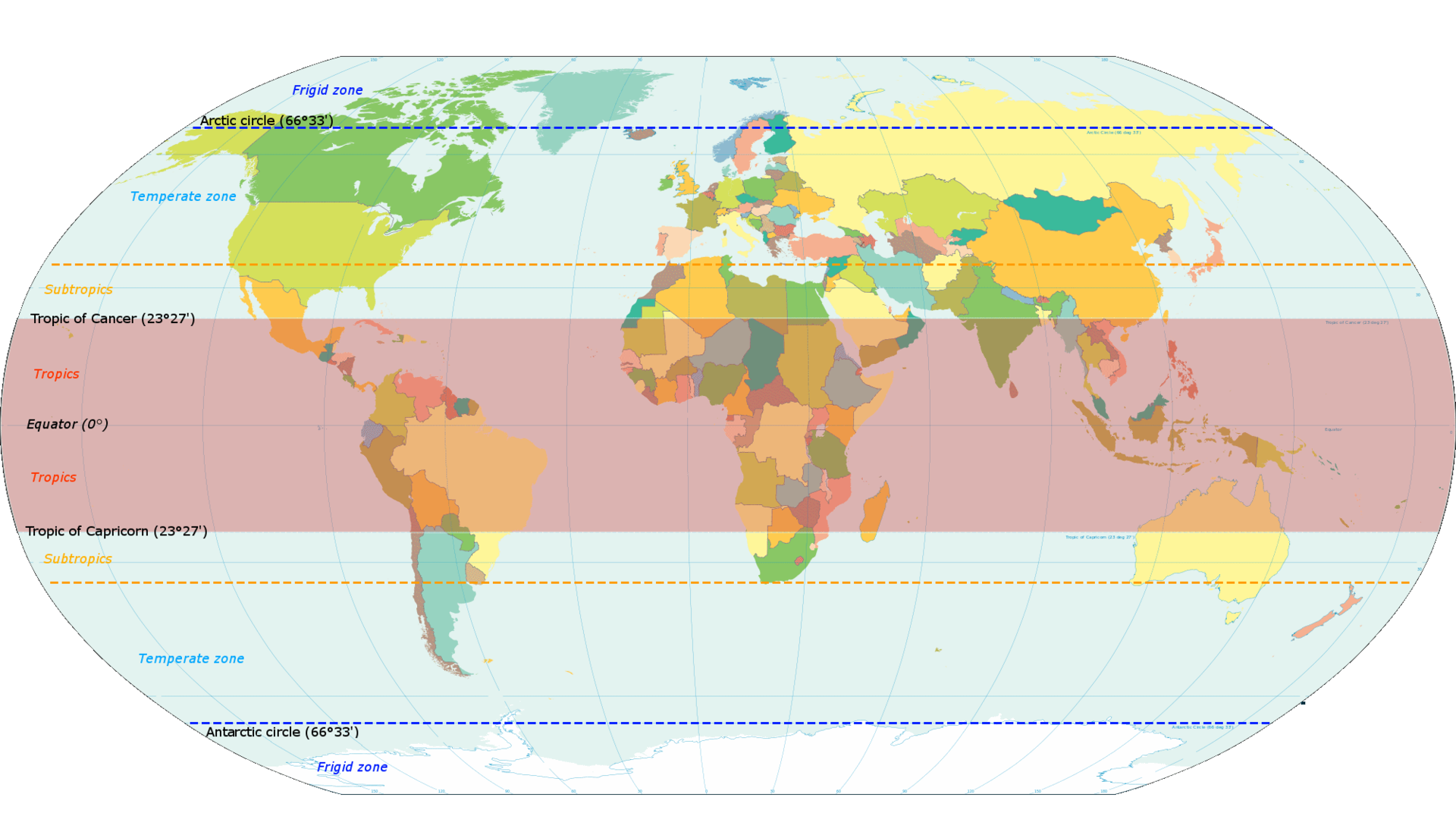 So by this sentence I take the temperate zone to be between the pink shaded area (the tropics, and the uppermost and lowermost broken lines (arctic and antarctic circles. This is simple enough.

Then in the next paragraph it says:

The temperate zones (latitudes from 35° to the polar circles at about 66.5°, north and south) are where the widest seasonal changes occur, with most climates found in it having somewhat balanced influence from both the tropics and the poles.

A little lower it says:

So now it's saying again the temperate zone is between the tropics (23.5 degrees latitude) to the polar circles.

Lower again it specifies that there is a suptropical zone, namely:

Which one is correct? Is there a contradiction here? If so, is it a mistake or something more subtle I don't understand?

Note that they say:

The word in can be used to convey that the first thing is only a part of the larger second thing... much as, for example, Texas is found IN the United States, or the preteen years are found in childhood.

But by including the additional further explanation of what the middle latitudes are directly after that, I agree it leans a reader towards your interpretation, and is ambiguous and likely confusing to others.

I'll try to make some minor adjustments to the article to hopefully alleviate any confusion.

But in all honesty, it's probably better to not get overly caught up in such excessively precise categorizing. I tend to believe that what one person, even one climatologist, might call temperate climates may well vary from what another one would classify them.
For example, they can be based on temperature ranges, on prevailing wind patterns, on breaking into equally-sized regions (like Fred commented), etc.

Really, I'd think of the subtropics as sort of a blurry boundary between the tropics and the temperate zone... where the closer you get towards the Equator, the less seasonal variability and frequency of cold air intrusions.

Indeed, even typical places well across into the "official Tropics" can see occasional years with some notable cold fronts, as happened in Cuba and even Costa Rica in the winter of 2010. So it's not like 23.5 is some magic physical boundary just because that's the northern extent of the sun's latitudinal cycle.

So the Wiki article as you read it appears to be saying the temperate climates are only 35° and 66.5°, only a subsection of the middle latitudes. But honestly, exactly what you classify the boundaries as is sort of like arguing over which states are in the Midwest or Southern Southern US -- very unnecessary outside of very specific circumstances, and prone to at least occasional dispute probably even among experts. Yes, a teacher or test may ask you to know their specific definition (whether of temperate boundaries or of which states are in the Midwest)... that's just part of life sometimes.

But the real take-home idea towards understanding how the Earth and specifically climate/weather work is just that there's a Polar region which has very cold polar air basically year-round, a Tropical region which has very warm Tropical air year-round (outside of colder mountains!), and then a "battle ground" that shifts seasonally and even daily in between, altering the weather significantly in those locations. And local factors like bodies of water and wind regimes can significantly shift regions into a large array of different expected weather

Note this indicates that this is where subtropical climates are located on the eastern, or leeward side of landmasses. i.e. inland of western coastlines - think Louisiana, the Carolinas relative to the west coast for Humid Subtropical climates. The of deserts Africa (Sahara, Namib, Gobi) Central Asia and the Middle East, and Australia and Chile for dry subtropical climates. At the fringes of these areas and occasionally within the same latitude range is the Mediterranean climate.

These areas would be within the 23.5 to 35 degrees of latitude range. They certainly are distinct from temperate climates which would be better described by moderate annual temperatures, broadleaf forests, high to average rainfall. In North America this isn’t a straight line across the continent, with Vancouver being warm and wet, and New York having harsh winters. You could argue that the cooler poleward areas of the temperate zone defined as between 35 and 66.5 are subarctic - this would reach farther south farther inland (Siberia, Central Canada, Northern Central Continental US, Mongolia).

I do think the Wikipedia article contradicts itself and there needs to be a caveat in there that the presence of the medditeranean sea in the Northern Hemisphere changes the definition, and it does overlook the subtropical zone and should note that there are dry and humid subtropical zones who’s location is dependent on distance from the oceans, and the presence or absence of warming coastal currents (I.e Gulf Stream).

The trouble with Wikipedia is that there are often generalizations made. The climate can vary on small spatial scales so labeling a climate as “the same” for a large swath of the earth is a generalization. Generalizations are needed, and there are finer classifications out there. Including a swath of latitude that actually includes subtropical areas is a mistake, they are quite distinct and different climate zones. That needs to be edited to read “temperate zones are located between 35 and 66.5 degrees, poleward of the subtropical zones.” The article would need to link to the subtropical zones in that sentence as well to make it really clear too.

For your own information you may find the Köppen Climate Classification System interesting to look at, it visualizes my points, and can explain more than I can! https://en.m.wikipedia.org/wiki/Köppen_climate_classification

Not the answer you're looking for? Browse other questions tagged climate geography or ask your own question.

28
What sort of climate zones would be present if Earth was tilted like Uranus?
6
Where is the Arctic Circle for civil and astronomical twilight?
3
What kind of climate could you expect in a mountainous area in a subtropical region?
3
What is the most optimal latitude on Earth for the generation of extreme maximum temperatures?
0
Why are there both climate regions from axial tilt and weather cells?
2
Are we entering a new Ice Age according to Milankovitch cycles?
2
Why is the weather in San Francisco so different from that in San Jose?