I'm aware that Indonesia sits in an earthquake zone, but historically I don't think so many big ones occur in such a close time. Also, this spread out in different islands (e.g. the epicentres in Java and Sulawesi are ~1,000 km apart) over several months, so it doesn't look (at least to me) like typical mainshock-aftershock relationship. Were they related in some way? e.g. Do they indicate an increase seismic activity in the region?

I'll try to answer your second question using the earthquake catalog of the USGS. I encourage you to run your own queries, it's pretty fun and easy to use! 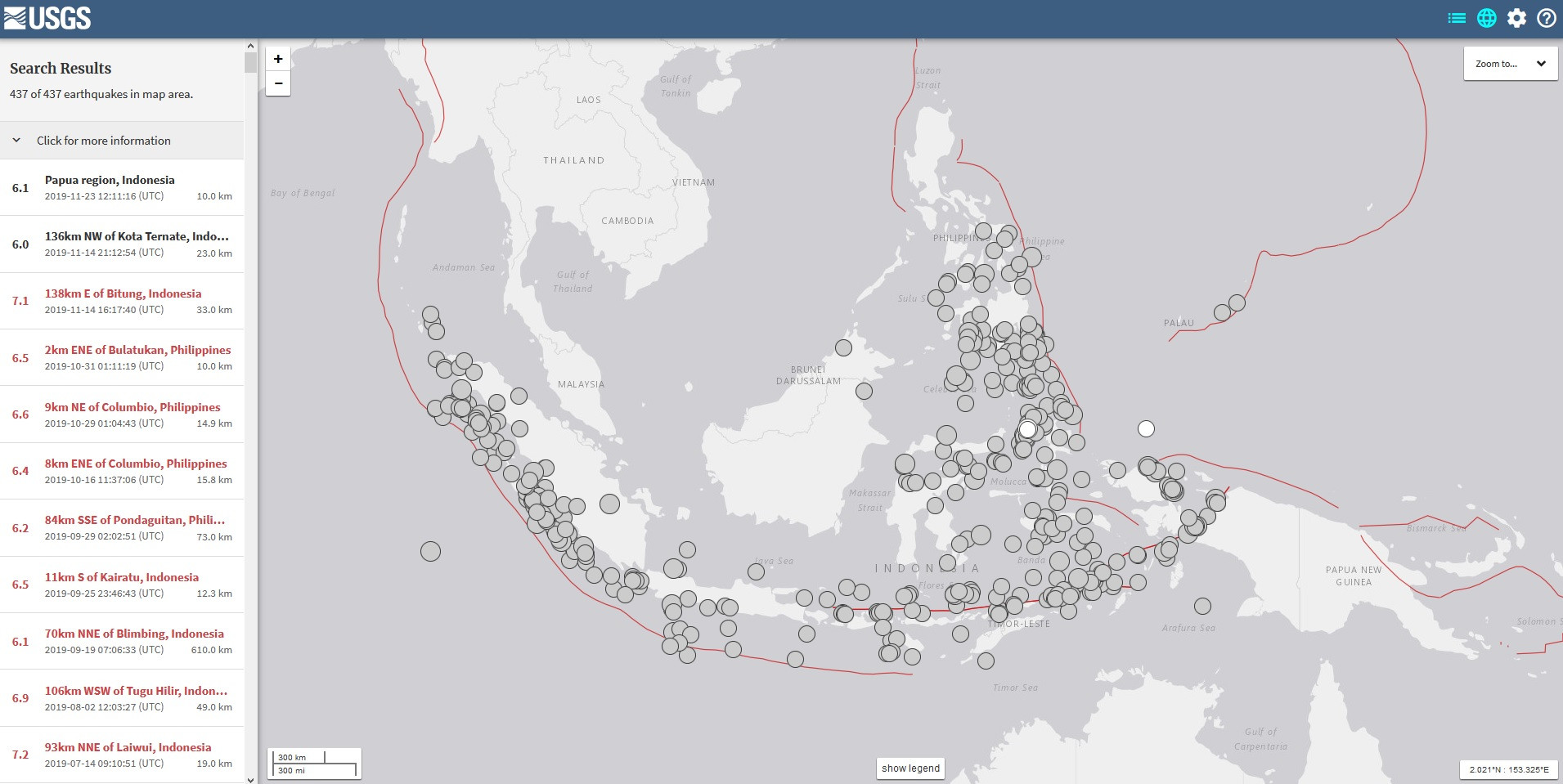 Here is a result of a query for 6+ magnitude earthquakes, starting from 2000, centered around the indonesian archipelago. There is a total of 435 events in the region during this period of time. Now you can download the list as a csv file and have a look at it to get some statistics.

It gets clearer if you look only at 7+ earthquakes. In this period there are 54 events in the region, but you can see that the vast majority happened in the 2000's, culminating in 2010 with 8 events. Then there is the only year without a 7+ event (2011), and five years in a row with only one event per year. From this graph it also seems that there is an increase in the last two years, with already 3 events in 2019, but I would be careful interpreting this: we lack perspective, and 54 is quite a low number to do a statistically robust analysis.

So from this I'd say there might be an increased seismic activity in the region, although it's too soon to tell for sure. Only time will tell, unfortunately.

Edit: The first question is beyond my competence. It is known that earthquakes redistribute the stress in the lithosphere (see the review by Hardebeck & Okada, 2018). But the tectonic setting is really complicated in Indonesia, with lots of small plates and some unique features, like the divergent double subduction in the Molucca sea (Zhang et al., 2017)... So it's hard to tell if an earthquake here could trigger an earthquake there by modifying the regional stress field.

The Indonesian (Malay) archipelago is a huge chain of islands, several thousand miles in length from the northern tip of Sumatra to the south eastern extremity in New Guinea, so the 600 miles you mention between epicentres is nothing very much.

Yes, the earthquakes are related, but there is no particular increase in seismic activity, it's normal for Indonesia. The earthquakes are random. The ones you mention are caused by the convergence of the Indo-Australian plate with the Eurasian plate to the north east. The plate margins loop around north-eastward, fairly close to the southern coast of Sulawesi The margin of the Indo-Australian plate is being subducted beneath the Eurasian plate and oceanic plate margin is being forced down into the mantle, where friction with the Eurasian plate above and the water content of the subducted zone cause partial melting of the rock. Rock is more easily melted where it has a high water content.

Plumes of magma from the melted rock, being lighter than the mantle, rise to the surface where they erupt as volcanoes. Some earthquakes are caused by volcanism, but the major ones are caused by friction between the plates. Movement of a plate is temporarily held up at a particular point and stress builds up until it can be resisted no more. The sudden release of pent up energy is manifested as an earthquake.