At 18:03 PDT at La Jolla Cove the lifeguard's bulletin board stated predicted low tide at 5:36 (17:36 PDT?). In fact, it was already after 6:00 and the sun had not yet set. The moon was a waxing crescent, about 2 days old. I infer that the moon would be setting in about 2 hours so the tide should be low in about 3 hours, that is, around 21:00 PDT. How can the discrepancy be explained?

I infer that the moon would be setting in about 2 hours so the tide should be low in about 3 hours, that is, around 21:00 PDT. How can the discrepancy be explained?

With regard to the latter, we're often told that the Moon rises and sets 50 minutes later than it did the day before. While this is the average behavior, it is rarely the actual behavior1. The time between subsequent moonrises/moonsets can vary quite a bit from this mean, with the variation depending on the phase of the Moon, the time of the year, the latitude of the observer, and other influences. For La Jolla, the times between subsequent moonrises/moonsets just for October 2018 varies from 36 minutes to 68 minutes later than on the previous day. 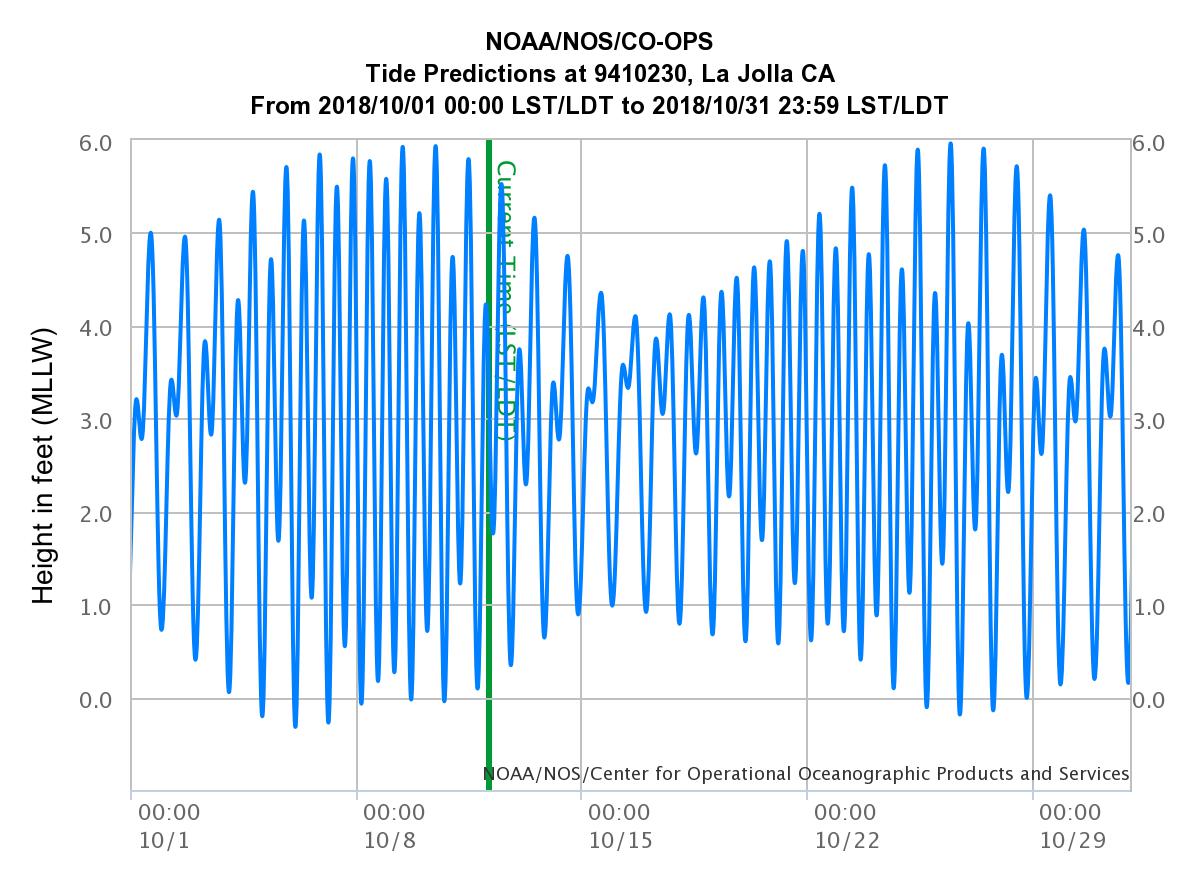 1Three statisticians went duck hunting. Two shot at a duck. Both missed, one ten feet to the left, the other ten to the right. The third proclaimed "We hit, on average!"

Not the answer you're looking for? Browse other questions tagged oceanography or ask your own question.

5
Is it possible to predict the maximum daily/annual tide height without calculating hourly heights?
8
How come the tide is low when the moon is high in the sky

18
What influences tide-height the most? Can I guess the height by looking on a globe?
15
Why is there a daily inequality for low tides?
11
Looking at ocean depth/latitude profiles of dissolved oxygen and nitrate. Why is dissolved oxygen low when nitrate is high?
8
How to Calculate the Equilibrum Function for use in Tide Calculations using Harmonic Constituents
3
Why don't spring tides occur at full/new moon (age of tide)?
2
How quickly can coral fossilize?
2
Global tide calculation
8
What goes into a tide power prediction for every fifteen minutes over the next twenty five years?
15
Why is the sea salinity high in the Mediterannean and Red Sea and low in Indonesia and Malaysia?