Has a hurricane or cyclone ever reformed after passing over a large land mass?

Hurricane Michael recently hit Florida as a Category 4 storm, and after the remnants passed across a great deal of the east coast of the United States it appears to have re-emerged into the Atlantic Ocean as a "tropical storm" with some models predicting it will cross the Atlantic and a couple even suggesting it will then turn south and possibly loop back west again. Unfortunately the model I saw predicting the full turn has been overwritten by a new forecast, so I can't put a link here but it is intriguing as a possibility.

Has any hurricane or other tropical storm ever managed to hit land deeply as Michael did, where most of the storm has been inland for more than a couple hundred miles, and then re-emerge over the same ocean and reform into a substantial storm in the same ocean? If it struck two different land masses, did a whole loop across a basis hitting a second time close to the first area, or if regained most of or more than its former strength that would also be notable but not required.

This page mentions hurricanes that have crossed from one ocean to another but does not mention storms that have reformed in the same Ocean (with the Caribbean counting as part of the Atlantic). One reason I'm not wanting to count these storms is that to cross between oceans like this requires a relatively small jump over land, especially if done across Central America, such that a significant part of the storm may always be close enough to water to fuel it, whereas Michael seems to have traveled at least 800 miles across land without much ocean support and is still being reported by multiple weather sources as being "tropical storm" strength and projected to possibly be a tropical storm all the way across the Atlantic, for instance in this forecast:

(This copy is here because this image is from this link and will likely be overwritten as soon as the next forecast is run.)

Since you don't seem interested in Atlantic-Pacific crossovers, of which there are several good examples..... 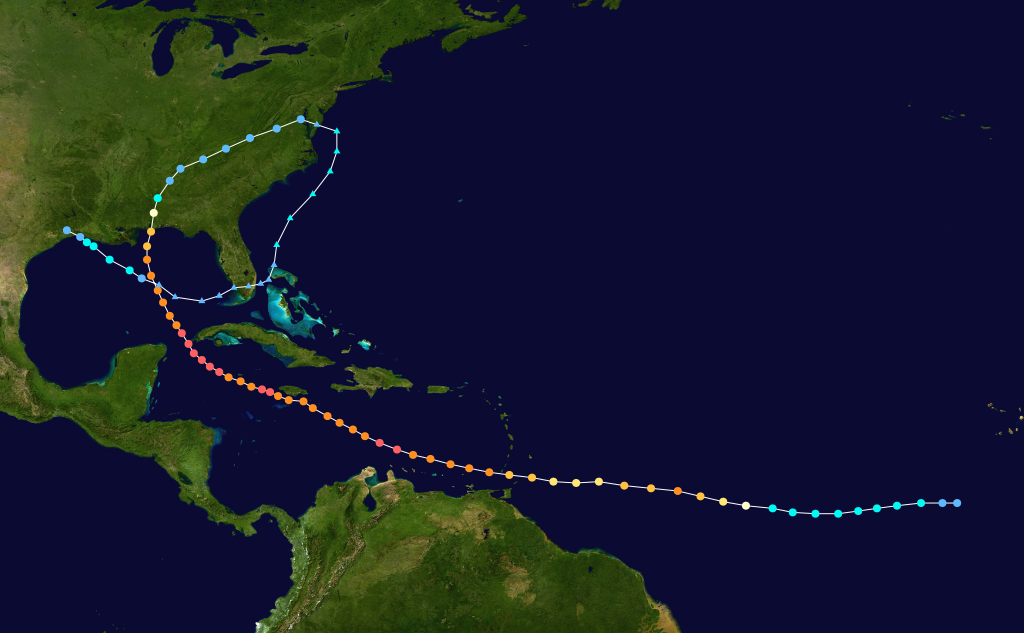 The key was the southward track in the Atlantic. Hurricanes weaken when they're that far north; they're away from the warm ocean waters that generated them in the first place. But because Ivan tracked south into warmer waters it was able to strengthen a little. It may have been pushed by a cold front. But also, the next hurricane, Jeanne, was already approaching Florida, so Ivan may have been sucked into the circulation around it. Jeanne did its own loop-de loop out the in the Atlantic, so the jet stream may have affected both.

29
Why are there no hurricanes in the southern Atlantic basin?
9
Have there ever been simultaneous cyclones in the same ocean but different hemispheres?
12
How is it possible that a Hurricane such as Alex forms in the Atlantic in winter?
4
How did a tropical storm starting with "D" end up next to a typhoon starting with "T"?
3
Why exactly did the use of Greek letters as names for Hurricanes happen the first place, despite the fairly obvious and predictable impracticalities?
3
How big was the eye of the El Reno tornado?
14
Why did Hurricane Ida have so much precipitation when it reached the Northeast?