If this is due to the Coriolis Effect, my other question would be how does the wind go upwards to form the storm clouds?

Air at this altitude actually spirals out and away from the center of the cyclone, pulling more air below in toward the eye (causing a positive feedback loop). However, some of this high pressure, high altitude air "leaks" inward towards the center of the storm instead of outward, and pressure eventually increases enough that it counteracts the strength of any updrafts in the center/eyewall of the storm. This air begins to descend (subsidence) in the center of the eye, stifling any convection and causing clearing at the mid and lower levels - creating the famous stadium effect.

The convection/rising motion in the storm is caused by air converging as it approaches the center of the hurricane. Essentially, when there is a bunch of air rushing toward the center of low pressure, it has nowhere to go when it arrives but up, thus forming updrafts! 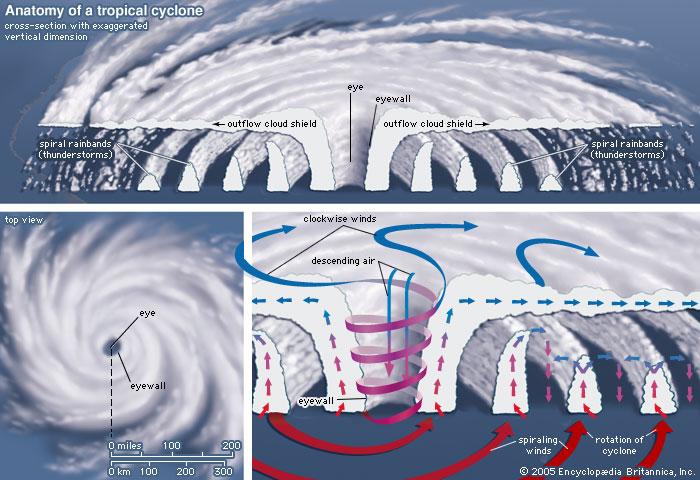 8
Why does air subside in the Eye - the lowest pressure area of a tropical cyclone?

32
Why does Coriolis determine the rotation direction of a cyclone but not my drain?
7
How big is the influence of tree leaves on global windsystems?
9
Have there ever been simultaneous cyclones in the same ocean but different hemispheres?
4
If a prevailing wind traveled due east in the Northern Hemisphere, would the Coriolis Effect act on the water?
6
Does the Coriolis Effect affect a wind from East to West?
4
Is it possible to detect Coriolis effect using a Wind Rose?