I want to use this example in a lecture to illustrate to physics students the concept of probability in forecasting.

As mentioned, the term you are looking for is persistence. Generally its strength varies wildly depending on what variable you are looking at, the location, and by whether you also further select other factors like season and other meteorological variables.

I would expect daily precipitation persistence is a relatively bad predictor, given that precipitation is often either a short-term event driven by very transient dynamics like frontal passage, or sees a fairly random spatial distribution over small areas driven by small perturbations and nonlinear interactions (thus typically leading to rain PoPs regularly being more useful than binary forecasts).

Persistence is often used as a basis to compute forecast skill... but it seems to be be reported in research using more sophisticated summarization metrics like skill scores than straight probabilities.

However, with a little searching I did at least find A Markov Chain Model for the Probability of Precipitation Occurrence in Intervals of Various Length by James E. Caskey, Jr., which did at least have a table along the lines you've asked... for Denver, Colorado between 1949-1958, using 0.01" (0.254 mm) as the condition: 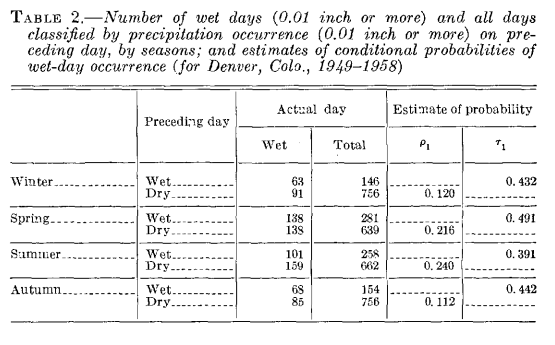 For those struggling to figure the values out, in this table when $\rho_1$ is similar to $r_1$, utility of precipitation persistence is low.

Colorado is a mountainous area, so I could imagine large-scale wind direction aloft probably proves more significant than many areas. For a location like Florida in the summer or Oklahoma in the spring, I'd imagine the skill is lower as persisting variables are less important. Still, because humidity often varies more slowly, regularly controlled by air masses and large scale wind directions, which often are directed by large synoptic weather features, there will likely be at least some difference in the conditional probabilities in all locations/seasons.

Don't know if that data is useful enough for your lecture purposes, but hopefully it offers a branch to seek into. You may be able to dig up a few more similar tables by searching on through research journal results in places like the AMS or, if need and desire be, could calculate such variables from station data available at sites like NCEI.

Pearson publish a data set for A-level students (high school) that includes weather data from various locations. While the data set is (deliberately) flawed [one task for students is to identify flaws in the data set] it is "real" data and questions of persistence can be investigated with it.

Not the answer you're looking for? Browse other questions tagged statistics or ask your own question.

15
How to reconcile hourly vs. daily probability of precipitation in the forecast?

24
What do weather forecasters mean when they say "50% chance of rain"?
7
Statistical weather prediction
15
How to compute the earthquake occurrence probability under ETAS model
11
How much does COVID-19 affect weather forecasts?