It also links to the recently published Geophysical Research Letter (Chaput et al. 2018) Near‐Surface Environmentally Forced Changes in the Ross Ice Shelf Observed With Ambient Seismic Noise (open access) from where the image below is taken.

EDIT: In the same issue there is a commentary: Seismology Gets Under the Skin of the Antarctic Ice Sheet which was written by Douglas MacAyeal, a glaciologist at the University of Chicago who was not connected to the new study which I also do not understand!

Dimensional analysis alone suggests that a length scale of the phenomenon resulting in these slightly sub-sonic oscillations can be obtained from speed divided by frequency (e.g. m/s divided by 1/s) but using the speed of sound in ice or water (roughly 4,000 and 1,500 m/s respectively) and circa 10 Hz suggests a length scale of a few hundred meters.

The paper itself is quite technical and in depth. Somewhere in there, is there a physical distance in water, or in ice that corresponds to this frequency, or are the oscillation frequencies due to a dynamic process like sticking and slipping, rather than to the propagation speed of sound? 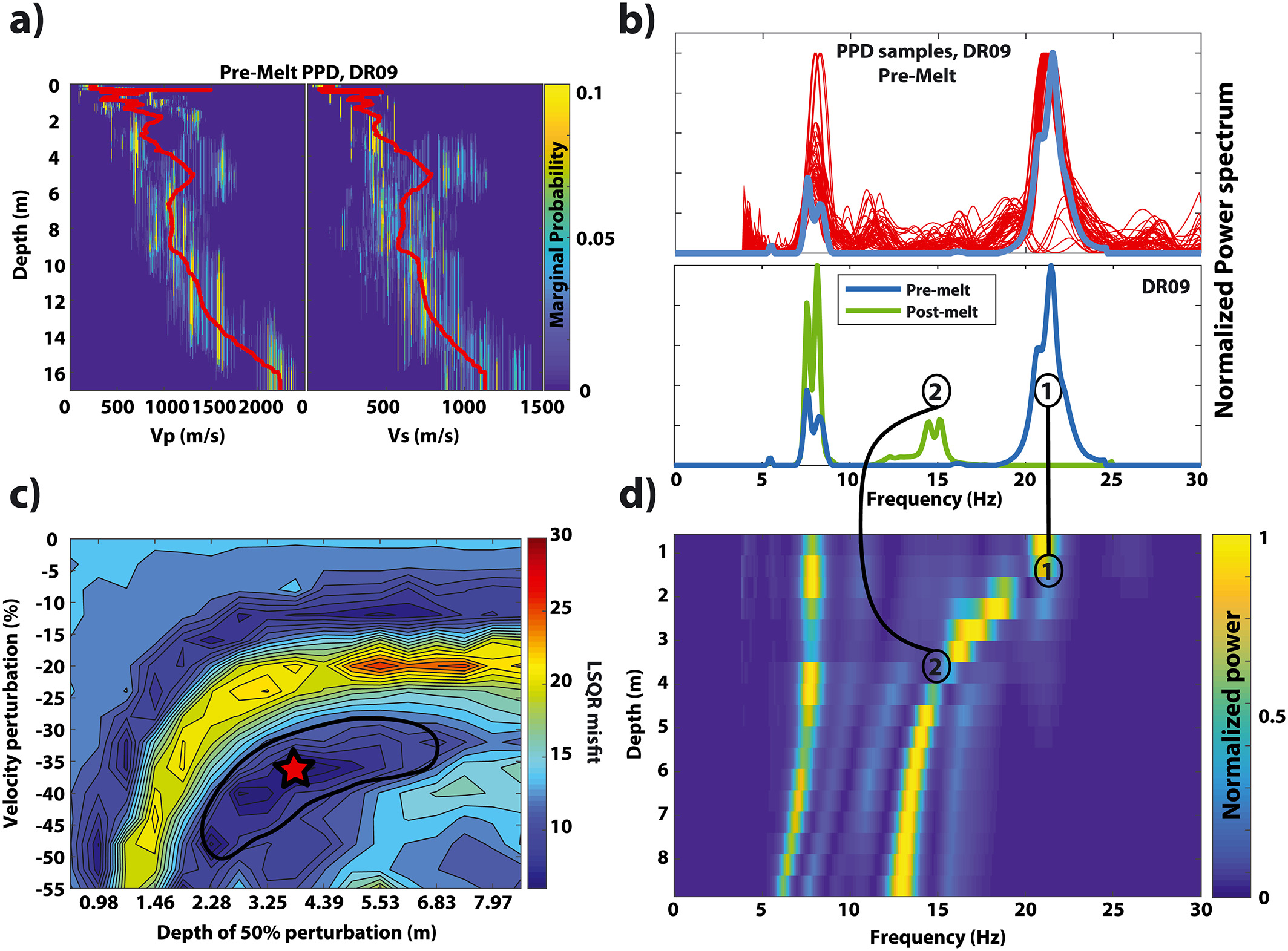 (a) Marginal PPD for Vp and Vs for the premelt resonances at station DR09, obtained by MCMC inversion of power spectra (See Suppl. S4: 1‐D MCMC inversion, Capelli et al., 2016). The red curves indicate the marginal posterior mean for P and S velocities. (b) Top panel, representative subset of power spectral models (red curves) from the PPD in (a) for station DR09, compared with the observed premelt spectrum (blue curve). Bottom panel, averaged observed premelt and postmelt spectral resonances (blue and green curves, respectively) at DR09. (1) and (2) indicate the position of a higher frequency peak of interest before and after the melt event. (c) Contour plot depicting a grid search of penetration depth versus velocity perturbation applied to the premelt model (peak pattern (1), in b), and fit to the postmelt resonance peak pattern, as denoted by peak pattern (2) in (b), lower panel. The minimum with respect to a least squares fit is represented by the red star, denoting a 35–40% perturbation with a depth penetration of 3–4 m. The premelt model used here is the mean posterior model shown in (a). (d) Example frequency peak response to a 40% velocity drop with varying degrees of depth penetration for the DR09 premelt velocity model in (a). Note that lower frequency spectral peaks can be nearly unaffected if the perturbation depth is shallow. (1) and (2) denote observed premelt and postmelt peaks plotted in (b). PPD = Posterior Probability Distributions; MCMC = Markov chain Monte Carlo.

The wavelengths that travel through the ice have a faster speed of travel, and the physical size of the pressure variations that cause the sound are not 100 meters. It's more like 1 meter, so it's similar to having an oversized speaker cone blasting air waves into the ice, which the ice then transmits to the microphone most clearly at a depth of 1-2 meters.

The best illustration I can find of pressure differentials and resonance modes from wind, of about 5-15 hz are from this 1960's YouTube video: 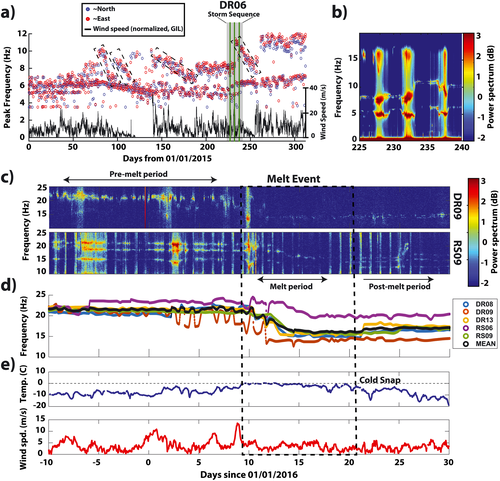 The compressed snow has an elastic property which absorbs higher frequencies at depth and adds higher waves together to form lower waves, so the frequency sounds lower in the ice.

If I was a bob moog, and I wanted to copy the physical resonance process of the dunes, It would be a relatively easy synthesizer to design. They have place bass audio cones at different zones of the dune at different times, and measure a 3D map of frequencies and timings from a zone near the artificial sound generator.

The unclear statements of the article say that:

Sound propagates through the firn layer, a study which may have already been measured and demonstrated by other snow and ice physicists? Sounds travel through snow, ice and water for different distances. To what distance and efficiency does firn transmit sound? there are graphs for snow acoustics and some of the research is hilarious:

Not the answer you're looking for? Browse other questions tagged geophysics antarctic ice glacier arctic or ask your own question.