Would epicenters in less-deep areas of ocean tend to reduce the impact of a resulting tsunami somehow (wave “breaks” before getting there?)

I just felt an earthquake at in a 6 floor building in Taipei, where I am familliar with how they have felt over the years.

This one felt particularly vertical, and made me feel queezy, while most have side-to-side motion. There was a weak shake, and many seconds later the strong, "queezy" one.

It looks like the epicenter is in less-deep water judging by the color of the water in the attached image. Would the reduced depth make it less likely for a tsunami to reach the shore somehow? 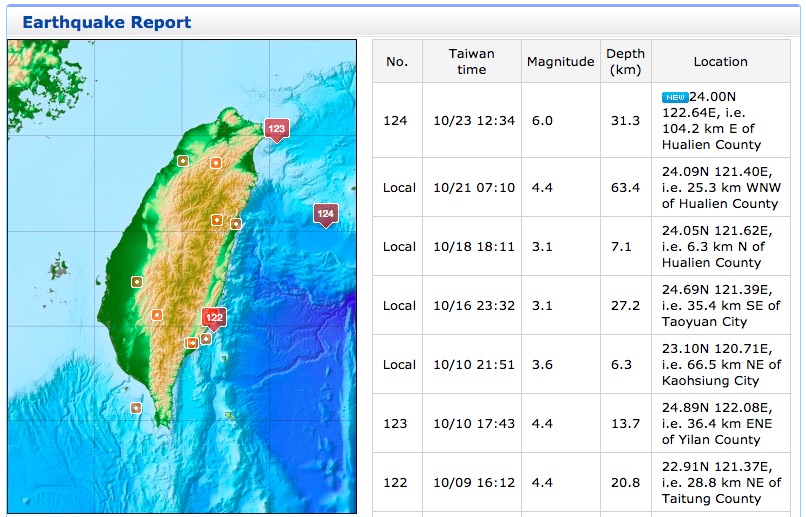 Tsunamis are created when large volumes of water are displaced vertically.

The predominant ways this can happen are when an earthquake of significant magnitude is created at a subduction zone - one tectonic plate subducting under another tectonic plate. During such an event, part of one plate moves downwards or upwards very quickly causing the water above it to be displaced vertically.

The other predominant way a tsunami can occur (seismically) is when an earthquake causes massive subsidence or slumping of material on the ocean floor - such as an underwater landslide. This can also create a significant vertical displacement of water. It is speculated this was the cause of the October 2018 tsunami in Palu, Indonesia.

There are meteorological causes of tsunamis but I won't address them because your question relates to seismically induced tsunamis.

The epicenter of an earthquake, whether under shallow or deep water, is largely immaterial to the creation of tsunamis. What is is critical is whether the earthquake has caused sufficient water to be displaced vertically either through sea floor movements (tectonic plates) or slumping or subsidence of sea floor material.

The difference between a quake under shallow and deep waters would be the size of the tsunami - how much water has been displaced vertically, how much energy has been imparted into the water and thus how high any wave will be and the destructive energy that it has.

Humans have tried to create tsunamis but were largely unsuccessful. During World War II, in Project Seal, New Zealand tried experimenting with explosives in what is now Shakespear Regional Park. Likewise, the US did similar experiments during nuclear weapons testing in the Pacific Ocean - Operations Crossroads and Hardtack, at Bikini Atoll. The heat from the nuclear weapons produced a lot of steam, but not significant tsunamis.

What causes Tsunamis is the energy released, not so much the water displaced. The energy travels through the water passing from molecule to molecule of water. Amazing stuff. There is a vertical 'stem' of energy. Out in the deep ocean one will not be able to even see an abnormal 'wave'.

Once that energy stem encounters a shallow bottom, that is when you see a wave above the water. As it moves into shallower waters, that stem causes a wave higher and higher.

The wave becomes visible as the bottom of the ocean pushes that 'stem' of energy upwards and out of the water. The size of the wave at the beach is as high as that energy and material allows. Doesn't matter if the epicenter is low or high or what happened to inject energy into the water, that energy moves through the water WITHOUT the water actually moving until the stem of that energy is pushed out of the water in shallow depths. Then the water falls over itself and moves on shore. Wave dynamics are fascinating! To include 'rivers' with currents along the coasts that are separated from the larger mass of the ocean. These 'rivers' also affect the dynamics of Tsunamis.

Not the answer you're looking for? Browse other questions tagged earthquakes tsunami or ask your own question.

14
If a very huge Earthquake occured anywhere on Earth could waves emerge to come together again on the opposite side?