How to predict when contrails are likely to form over a specific location using public data?

I saw the image below used as a click-attractor to an unrelated story about tourism, but found a larger version here.

If I wanted to write a contrail predictor script that would poll public sources of atmospheric data and check locations (and altitudes) to see if they were currently substantially more prone to contrail formation now than on an average day, what public sources of data might I look at, and what parameters would be the most important? 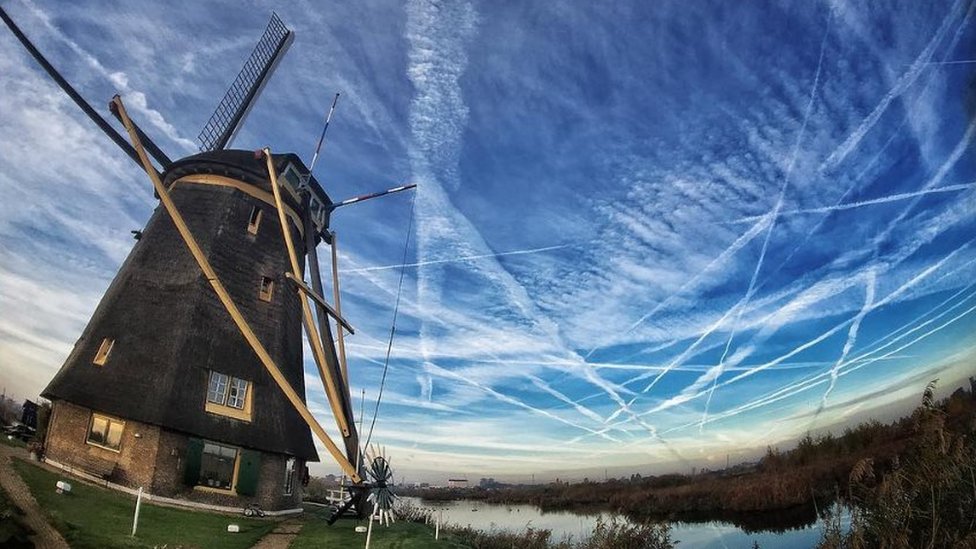 As described here, condensation of cloud particles (i.e., contrail formation) will occur if the mixing between hot and moist exhaust from an aircraft engine and ambient environmental air results in the mixed air exceeding the ice saturation vapor pressure as its temperature changes. A conceptual diagram of this mixing process is shown here, for exhaust (parcel A) and environmental air (parcel B) with generic temperatures and saturation vapor pressures is shown here:

However, this would require knowledge of these specific temperatures and corresponding saturation vapor pressures. More practically, contrail prediction often just assumes that the air at altitudes where jets typically cruise (commonly, though not always, above 8 km/26,000 ft and at air temperatures below -40°C) is near or above supersaturation with respect to ice. This assumption is used operationally, for example, in NASA's publicly-available persistent contrail forecast. Note that the first source indicates that low wind speeds are also useful in identifying likely regions of persistent contrails.

Several sources of data may be useful in constructing similar analyses or forecasts and comparing to what might be expected on an average day, based on the local climatology. Observational data from radiosondes (i.e., weather balloons with instruments measuring temperature, moisture, and winds) is available globally in near-real time. This provides actual measurements of weather conditions through the relevant altitudes for contrail formation, and is particularly useful if measurements are needed relatively close to a radiosonde launch site.

For broader coverage in both space and time, the US National Oceanic and Atmospheric Administration provides archives of past weather analyses and operational forecast model output that can be requested by the general public. These datasets contain gridded model output with common parameters at various levels through the atmosphere on a national to global scale. While these datasets do not strictly consist of observed measurements, they are useful for analyses extending beyond the relatively limited set of observations available in most circumstances. Output from various operational forecast models is available for near-current or future conditions, whereas the reanalysis datasets provide similar information obtained from model analyses of past weather.

Not the answer you're looking for? Browse other questions tagged atmosphere temperature humidity atmospheric-optics or ask your own question.

7
What is this spaceship-shaped cloud?
6
Are these plane trails seen from satellite

1
How much warming there was over time for a specific month?
5
How would I use data to find specific humidity and mixing ratio?