As one can see in the plot, the author relates

The problem is: for both Uranium and Thorium decay series shown, the decay values presented at the tables differ from the peaks at the plot. I would expect to see the Uranium series peak with a value of 3.272 MeV (214Bi decay value in Table 15.2A) instead of 1,76 MeV shown in the plot.

The same for Thorium series: if the corresponding decay energy of 208Tl is 5.001 MeV accordingly to Table 15.2C, why does the plot show a corresponding value of 2.82 MeV? 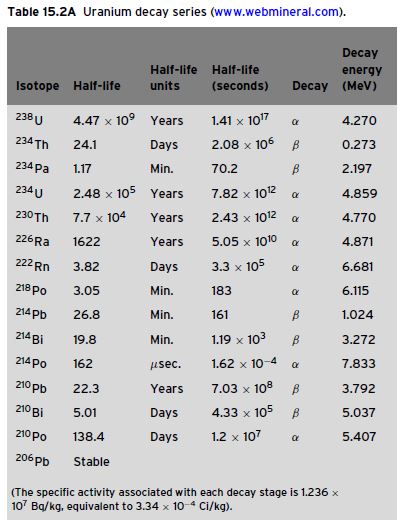 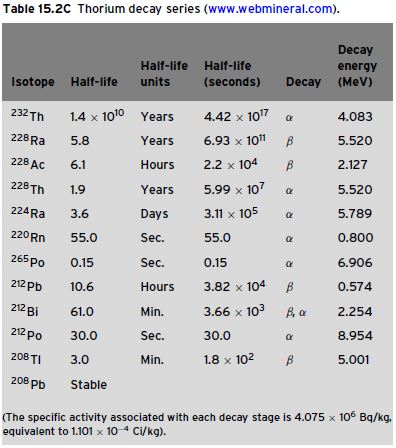 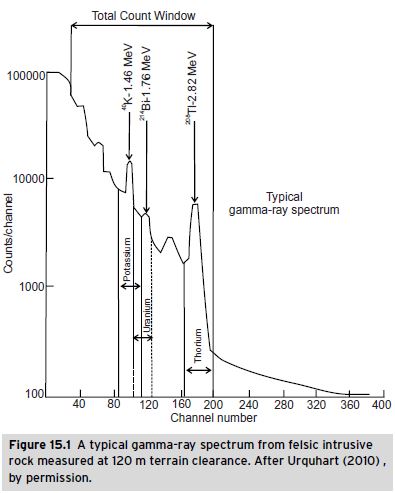 In summary, the 3.272 MeV get distributed in varying proportion to the electron and the electron antineutrino from the beta decay, zero or more gamma-ray photons, and some small amount to nuclear recoil, etc.

The sum of the probabilities of different gamma ray lines from the same decay can be larger than 100 % if the deexcitation happens via a gamma-ray cascade, i.e. if the nucleus first transitions into an intermediate excited state and then again to the ground state or further intermediate states. This means that a single beta decay results in multiple gamma-ray emissions. This is illustrated in the Wikipedia article on Gamma rays using the example of the 60Co decay which results in two photons emitted in > 99.9 % of cases.

Not the answer you're looking for? Browse other questions tagged geophysics radioactivity or ask your own question.

8
Do fluctuations in radioactive isotope decay rates affect carbon dating techniques?
8
What is the total Earth's interior energy budget?
5
Is "seismic energy released" a regionalized variable and can be analyzed using geostatistics?
3
What is the difference between radiation balance and the global energy balance?
2
Potassum-Argon Dating and Proportions of Daughter Products in Potassium 40 Decay Channel
3
Energy Density of Porous Rocks
2
How much of all current energy on earth arrived as sunlight vs. as kinetic energy during formation?
10
Taking into account the decay products of transuranic elements, are the world's uranium reserves growing or shrinking?