Given that water will center over the mass of Earth, how could Pangaea be the only continent?

Consider this scenario: If the surface density of Earth were constant, it would follow that it would be impossible to have all land mass that is above the floor of the ocean concentrated on one side of the Earth. The water would simply flow until it centered over the mass of the earth. With this scenario the amount of land mass above the average ocean floor would need to be balanced around the sphere of the Earth, so with all of the currently above water continents on one side of the earth (Pangaea), other continent(s) would be exposed on the opposite side of the earth.

So is that scenario really the case, or is there actually enough density variation in Earth's crust to have higher density rock concentrated on the ocean side of Earth, which would allow all of the landmass above water to be concentrated on the less dense side?

Assuming that the surface density is relatively constant, it would be impossible to have all of the above water land mass concentrated on one side of the Earth.

That's a bad assumption. Four key differences between oceanic and continental crust are

The combination of different densities and different thicknesses means that the continents are elevated above the ocean floors by almost 5 kilometers on average.

If all the continents were on one side, then there would be a miniscule change to the centre of mass of the earth, which would cause the sea level to be slightly higher on the side with the continents than the side without. I'm not going to try to calculate the magnitude of that offset, but bear in mind that the earth is a solid ball of diameter ~12,600km, while the crust is a little 35km layer on top[1]. And the crust is less dense than what's underneath. The continents will make very little difference to the position of the centre of mass.

That's a first approximation. There will also be some direct gravitational attraction between water and continent. This has been calculated (as, interestingly, has that between water and ice sheets), and it does have a measurable effect, increasing sea level close to the land by a small amount. I don't remember whether that amount is of the order of centimetres or metres (can anybody fill me in?), but either way it is not remotely close to being enough to submerge the continents.

[1] Credit to JeopardyTempest for phrasing this nicely in comments.

OK, I'm sufficiently fed up with this to attempt a mathematical answer. It'll be very approximate, but it'll demonstrate an upper limit to how much the sea is skewed to one side of the planet (it's actually more than I expected). I fully expect to get something wrong here; if it's something that matters, please tell me about it!

Let's imagine a cartoon planet that consists of two parts:

For simplicity we'll assume that all of these have equal density, and in arbitrary units we'll define that density to be 1.

Here's a diagram (not to scale): 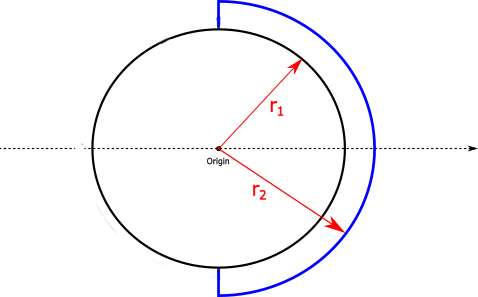 So the centre of mass of our cartoon planet is 2.9 km closer to the "continent" side than the "ocean" side. That means that the ocean will, rather approximately, try to form a shell centred on that point, thus being 2.9 km deeper in the centre of the continent than in the centre of the ocean. Errr... Except that the sea wouldn't actually do this because it would be blocked by the giant continent that's in its way. To figure out what would actually happen would require doing the maths in 3D, and possibly involving tractive forces and the like, and that's well beyond my capability this afternoon ;-)

I emphasise once again that this is an extremely generous scenario - half of the planet is continent, which is more than on Earth, and everything has the same density, rather than the inside of the planet being denser than the crust (which would make the effect much weaker). Plus, once we're dealing with values of a few km, in the real world there are probably other variations (e.g. equatorial bulge, non-ellipsoisal geoid due to density variations, etc) that have much bigger effects.

14
What are the causes of the supercontinent cycle?